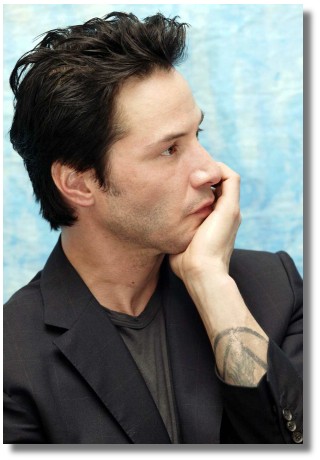 KEANU: NOTHING MY FANS DO IS STRANGE

The Matrix superstar Keanu Reeves has been in the movie business so long, he doesn't find obsessive behaviour by his fans shocking anymore.

The hunky actor - who shot to fame in comedy caper Bill and Ted's Excellent Adventure - is aware that big event films like The Matrix and its two sequels can turn into a way of life for some devotees, and finds their fascination amusing.

He says, "People do Matrix costume parties and get Matrix tattoos and that sort of thing.

"But there was a breakfast cereal called Bill and Ted's Excellent Cereal named after that movie, so nothing seems that strange anymore."

Why, yes. I have DOGSTAR license plates, and a Keanu film t-shirt collection (which I really need to do an updated inventory of), and yeah there's this little website thing but can you really call that obsessive?

It's quirky! It's a healthy interest, it's sexier than beanie babies or NASCAR.

And frankly, eddieshirt is so comfy I would sleep with him anyway.

Everyone needs a hobby. Keanu fandom is mine and it's been good to me. I've met the greatest people and had the best time supporting him and his career and interests. Being a Keanu fan changed my life. You can just read this site and see the friendships and recount the events that testify to that.

I sometimes get a little peevy when people who don't understand a fandom throw around words like "obsessed" or my least favorite, "rabid". So what if my idea of a perfect trip is to go see his band play and not to some football game or to climb some rock? Yeah, I'm a grown woman and have a Neo doll on my dashboard.

Keanu's cool with it and so am I.

Calm down, it's ok, they didn't mean you personally :-)

I'm sure there are some freaks, but you are not one of them. You respect him and I don't count going to a public concert as stalking.
Compulsively watching EVERY sports game that has men in little tight shorts touching 'balls', and snarling at your room-mate/girlfriend/wife when they interrupt the 'game' is much closer to a sick obsession in my book.

And yes! Why can people become friends over stamps, collecting Disney-figures *for god's sake* or even playing 'bingo' together, but not over Keanu?
I see it as the 'girlies giggling over the unreachable guy in the senior class' :-)

And if anyone dares to bite you, I'll personally punch them in the face. :-)

Haha, I don't take it personally. I know I'm lucky in a lot of ways to be in a place in my life where I can let my Keanu freak flag fly pretty high, and I'm proud of it.

I look at it this way. We have a common bond that brings us all together. Does that make us freaks? I hardly think so! And for the record, my Neo doll sits right on my desk at work next to the beanie babies, and yes he is much sexier. LOL

Right there with ya, baby!!! Some people can really twist things around and make it out like a respectful and admiring fan is a psycho or sumptin', even tho said people go on & on about their incredibly bogus pastimes, hobbies, or occupation. They make it sound like ya might be one sidewalk short of stalkerdom just because you support the guy or work harmlessly to spread promotion of da music. Everyone has something that makes them happy & is fun! Respect others choices as long as they aren't harmful to anybody. Everyone has their own "drug"---this is one o' mine...oh, and coffee...I'm sooo boring...

I think I need a Neo doll..."everybody else has one!" I guess I'd put it next to my Sam and Frodo in the elvenboat. But..the only one I saw was an 'action figure' with lotsa guns. Which, although I love the lobby scene like nobody's business, isn't really how I think of Neo most of the time, if ya get my drift...and I know you do. Barring that, somehow I don't think they're gonna do wet, tragic, transcendent Neo either... I know everybody put down the "Real World Neo" figure, but what is the alternative?

The Revolutions Real World Neo (with his hand out) is really cool, I'm not sure of the size though. The original 12" R.W. Neo (aka "Dickie") is U.G.L.Y. The N2 toys 6" one like I have in the car is perfectly portable, and sometimes you still see them on eBay. Mone still has his original guns. I think the McFarlane one from the Chateau scene might be a good one as well (again, I'm not sure of the size), Nudel.

"Hey, watch it, woman. Brunettes are far from dumb!"

Rhon, It's a piece of wardrobe from Chain Reaction I bought on eBay a while ago. There's a post with a pic here.

Thst's okay -- anybody gives me a hard time, I tell them my Neo doll will kick thier ass.

Okay, can someone point me to a website where I can buy/steal a Neo doll? The guy in the comic book store in the shitty town I live in keeps saying he will get them in stock, but he has been saying that forever.

*sheepishly*This town hasn't even gotten Revolutions (and isn't going to).......

Hey, nudel! I *do* have the lobby scene Neo. He's on a shelf in my cubicle and is there, at the ready with gun drawn, to protect me daily. :) Those not "Matrix-aware" look at it (and me) like I have lost my mind. Oh, well. It was a gift and I love it bunches.

Melissa, check spawn.com for the macfarlane toys, or search keywords: Neo figure (or neo action figure) at both eBay and froogle.com

Oh, I thought you could purchase from spawn.com, but it looks like they refer you to retailers.

Thanks, krix! The "where to buy" stores listed at spawn are some of the same ones I checked already. Was told that "those toys aren't family friendly." Of course, these stores are in a rural community where it is routinely common for kids 12 and up to be *excused* from school to go hunting.

hobbies and obsessions aside, you are a content management goddess.

i googled onto your site approx. 6 months ago, and i have to admit, i continued to "drop in" just to see how a$$ fridays transpired ;) after the demise of a.f., i continued to come back... until, one day i was struck with the realization that *i* was a keanu fan.

i think it is more than obvious how much of yourself goes into this site and that is a truly remarkable and inspiring gift to all fans -old and new.

helbug, welcome to the fold!

You're so kind, thank you.
*hand to heart*

I've got the 'Neo in the real world' on my office desk. People are always pickin him up and touching his face! UGH! In my opinion, it has the closests resemblance to his hunky, sexy self that I've seen. Kinda freaks me out sometimes. :ob

Everyone else has a Neo doll indeed, nudel. Everyone except meeeeeeeeeee! I do have all three Power Puff Girls with magic lighting eyes protecting my desk at work.

Hey! Im also a BIG fan of Keanu. It is a great interest and fun! I have a life, I work, have a boyfriend, and also in Nursing school.
But I have a healthy interest in him. I admire his work and just him being a regular guy! I dont have people giving me a hard time fortunetly. But I do have 4 Neo figures, and Trinity, and the 12" trinity on the way along with Agent Smith. Lol, I am also a grown woman, almost same age as Keanu..early 30's. But yes my life has always been very happy and good, and now its even better with Keanu! :)
I made sure to order 12" Trinity for 12"Neo he is sitting on my pillow...waiting for her..*sigh*!
Keep luvin' Keanu!!

wheee! thanks, friends! I went to toywiz.com and ordered Real World Neo and Lobby Neo McFarlane figures and with the postage it was less than $30 US. Not bad! although they say Real World Neo won't ship until December :(

Anyway, my colleagues at work think I'm crazy already since I have the Empire magazine holographic Neo cover (framed) and a small copy of the 'waterfalls' poster (framed) [St. Neo and Church of Neo] not to mention a printout of the Neo Revolutions poster on my bulletin board, and Dr. Strawberry on my computer desktop..

Real World Neo comes with 2 heads (ewwww!) so I guess one is blindfold Neo..

And the best thing is...a friend called me up at 6:45pm and asked if I wanted to see Revolutions again--at 7:30! so I even had an unexpected trip to see the wet Neo goodness again tonight... And the friend (a guy) said: wow, that Keanu Reeves can really act, with his eyes all covered up like that! I just said, yes he can.

And the teenage boy sitting on the other side of me wiped his eyes and sniffed about six times during Trinity's death scene.. awwww..

The best description I've heard yet!

I need to visit the IMAX stat!

Posted by: mel on April 1, 2004 03:35 PM
What's on your mind?.....
(new here? please read this before commenting)
Remember, this is a fan site.
Keanu Reeves is in no way connnected to this website.
Please do not make a comment thinking he will read it.
Comments are for discussion with other fans.
Thank you.