Zen and the art of Wee Neo in Québec

Big Love and thanks to Zen for showing Wee Neo around on her trip to Québec. 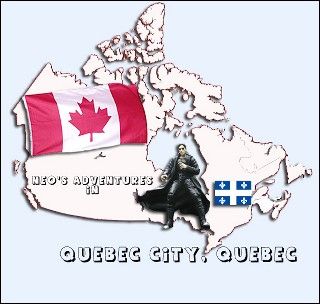 "So, my husband and I are packing our things for our trip to Québec (Canada’s only officially French province!) when the phone rings. It’s Wee Neo! And he’s in Québec. My friend Julie!, whom he visited in Amsterdam a few months ago gave him my number in case he ever decided to visit Canada. He asks about Julie! Do I detect a bit of lust in his voice? Ahem We chat a bit and decide we’ll meet up the next day in La Belle Province."

"We are to meet Neo somewhere on La Côte de la Montagne. I’m a bit worried as Wee Neo is quite Wee and I hope we don’t miss him. Or step on him. Just as I’m about to take a picture of some flowers in a lovely pattern, I spot him! 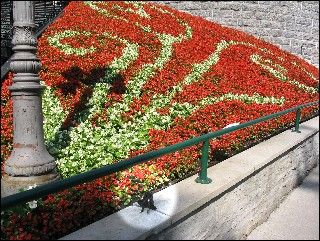 We kiss, we hug, we go back to our suite at the Auberge so Neo can leave his stuff.

Neo checks out the view from our window. 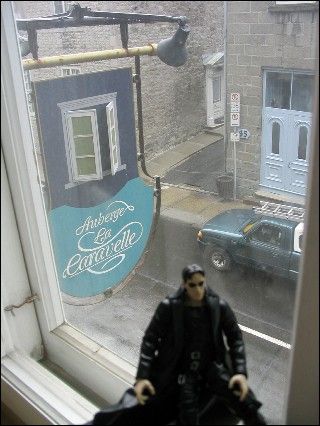 Then he checks the view from our other window. He calls out for me to take another picture. So he can prove he was in Canada, he says, pointing to the flag. I take the picture, waiting until the wind moves the flag in a good position. 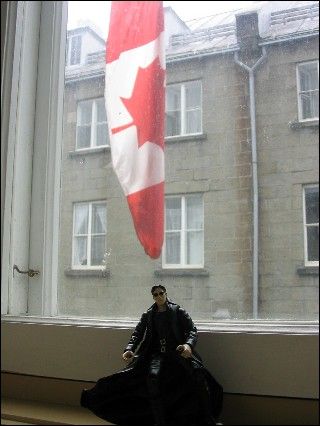 It’s time to go sightseeing, so Neo checks himself out in the mirror to make sure his coat is hanging just so. 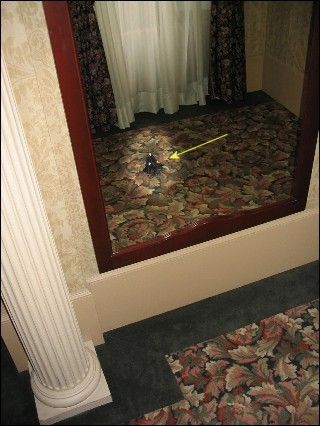 Like Neo wrote in his postcard to krix, the New France Festival is going on. I give Neo the pass I bought so he can enter the festival grounds. 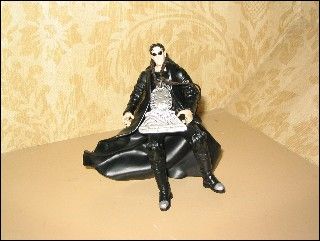 As we walk to our many destinations, I explain to Neo how this part of Québec City has maintained its original look. It’s called Le Vieux Québec (Old Québec) and there are still narrow cobblestone roads, the buildings look like they did almost 400 years ago and the entire “Old” section is protected by a giant wall. I’m about to tell him why the giant wall, but he’s barely listening. He wants me to take more pictures of him. Was he always this conceited? ["He prefers to call it 'photogenic'"--krix]

But, he’s The One, so I take pictures. We take in the sights.
First, Le Petit Champlain, a popular little street filled with lovely shops. It is also the oldest street in North America. 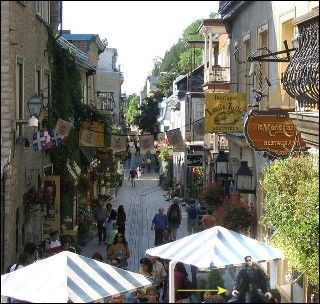 A museum and lovely example of the Old Québec architecture. It may be a challenge to find the Wee One in this one. *wink* 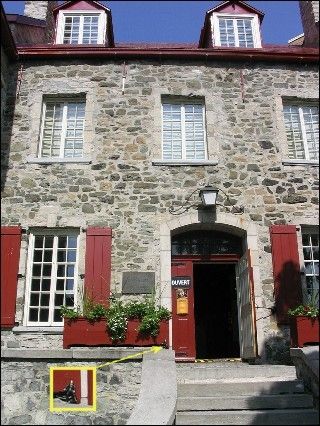 Getting to wear the New France traditional clothing without actually having to change. 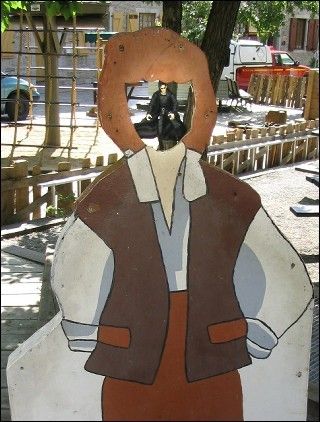 More of the beautiful buildings 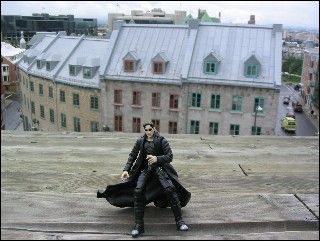 And Old Québec’s most famous structure, the Château Frontenac 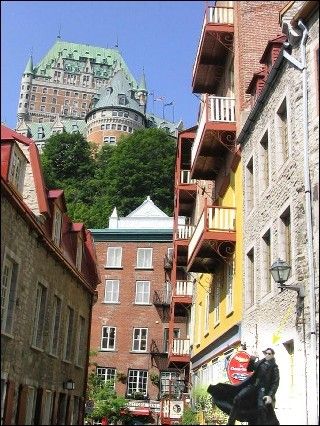 It can be seen from practically any spot in Old Québec.
Even from the pub where Neo decides he’ll have a taste of Québec brewed beer. 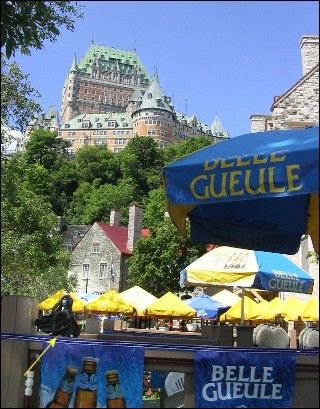 We then head higher up the hill and get a shot of the horses and carriages on which tourists can visit the city. 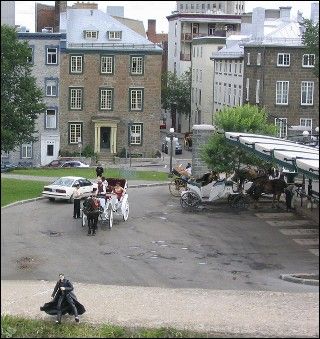 And then Neo poses in front of the Québec Parliament. Notice the Québec flag floating on top! 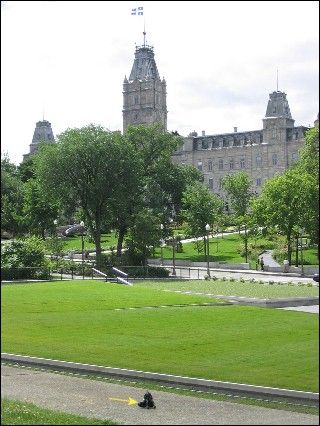 Next, we spot a cathedral. Or maybe it’s just a church. Does anyone know the difference? 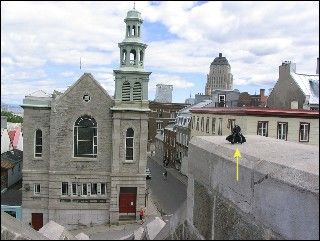 In any case, Neo doesn’t notice the church, he’s more interested in the fact that he is standing on top of a huge wall. Suddenly, he wants to know about the wall. Sigh....I explain that the wall was built around the entire city to protect it from attacks. It started in 1820 under British rule and took 30 years to complete. I tell him how the English attacked and took over Québec back in 1759 and that I guess they didn’t want to risk losing it again. Neo laughs. He has met the English, in the form of Nettie, and he does not believe they would be the type to attack whole cities. I assure him that Nettie was most certainly not on board English ships when General Wolf’s army attacked Québec.

Since Neo is interested, we decide to take a walk along the wall and check out the defense ware.

The wall and the “new” sections of the city outside of it... 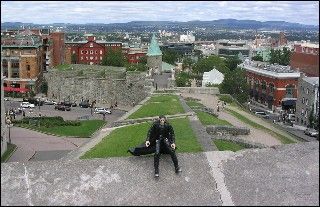 Some sections of the wall still have the cannons that defended them back in the day. 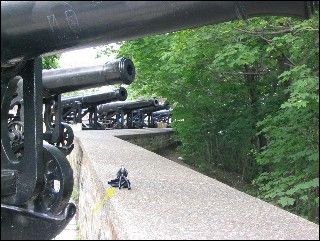 Beyond those trees is a deadly cliff! Neo decides to check the cannons out more closely. 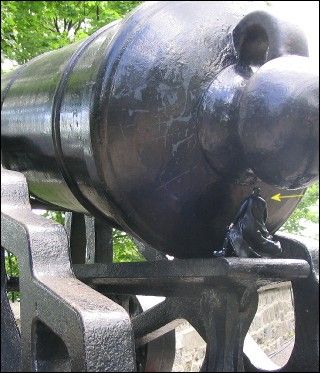 He really, really liked the cannons for some reason. He kept saying “I need cannons, lots of cannons”. The phallic shape of these things is probably what got him flashing back to “the girls” who ahem turned him down in Amsterdam because of his, um, weeness. Next thing I know, he’s here.

I coax him away by going on about more arms and ammunition.

Gun holes in the great wall for shooting at people. And no! we can’t practice on the tourists! 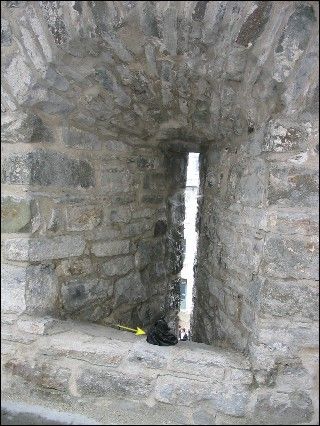 Neo finds his position on the wall protecting the ammunitions building 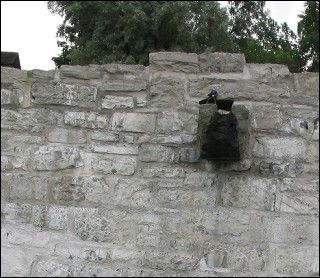 Can you spot him?

He likes the cannonballs... 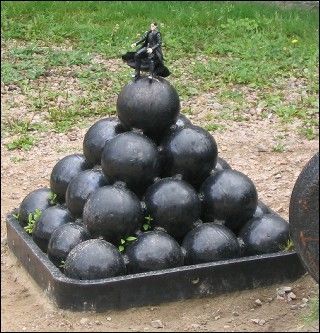 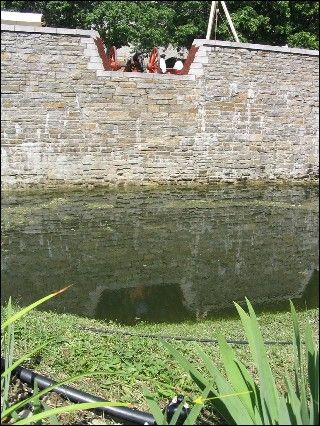 Wait! are those real soldiers up there? Neo is convinced the city is under attack again! He hides in the bushes, um, I mean the grass. I try to explain about the festival, the period costumes, but he’s not listening. He runs back to the Auberge and calls his army together! 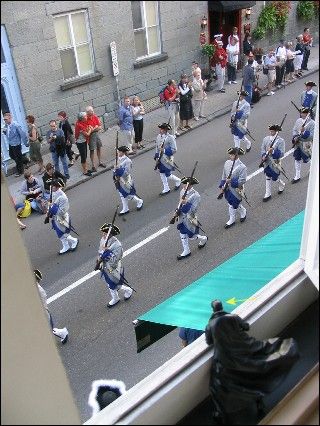 Or at least he thinks he’s gathering his army. That’s a parade you goof! “I knew that” he blushes.

We settle in to watch the parade. 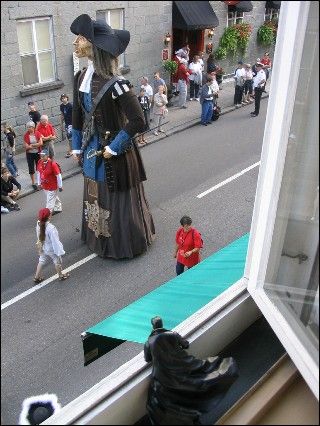 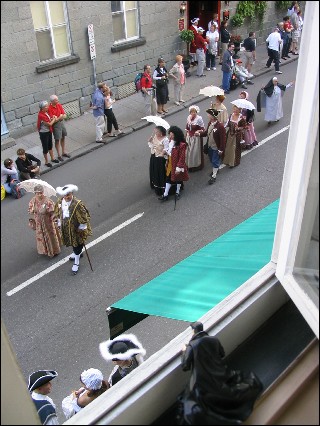 Neo is convinced he has met the princesses in some other lifetime. Hee hee.

After a week of sightseeing, overeating and overdrinking, it’s time for us to go. We invite Neo to come back with us to New Brunswick and he eagerly accepts. We suspect he’s running low on cash. *wink* ["I gave him money, he spent it all on WEED!"--krix] We take off, passing through the entrance of the great wall. 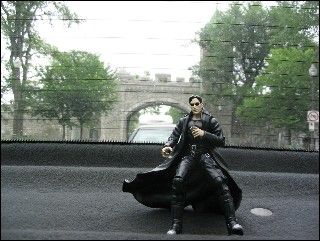 On the way home, we take this picture for sta-cie who mentioned once that she finds the name of this town particularly funny. Ha! Ha! 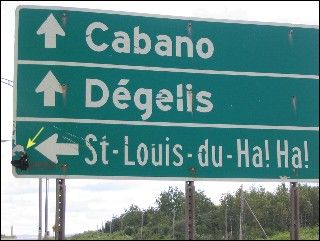 And before we know it, the eight hour drive is almost over. We’re in New Brunswick. 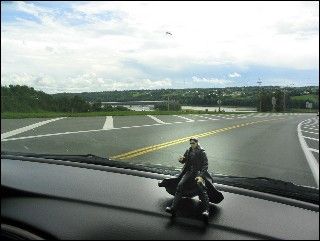 How can we tell? Why there in the background is the world’s longest covered bridge! Exciting isn’t it? Exactly. That’s why we took a picture from the car and didn’t stop.

Stay tuned to find out how Wee Neo made out during his stay in New Brunswick! "

P.S. "Here’s an interesting little tidbit we discovered on our trip. (Neo wasn’t with us on this particular day, he was sightseeing on his own.) My husband and I went to the docks and saw this (click for image).

The girls in dresses sitting on the dock as well as the one taking a picture were dancers at the festival. The man in blue was their shoe repair guy. He’s fixing their shoes with… TAPE! Check out the roll on his lap! Looks like it is catching on. ;-)"

Thanks Zen! Oh and my apologies for getting a little happy with the arrows, but the scenery in the pics was too lovely to crop so Wee Neo is hard to spot in some of them.

Fantastic scenery - thanks for looking after wee Neo Zen.

I need to come and pay y'all a visit.

Hooray!! Wee Neo visits such interesting places!!! Can't wait to hear about N.B. thanks, Zenny, for the tale! Someday I'll make it to Quebec!

Wow - or as the french are saying 'extraordinaire!' It seems like Wee Neo sometimes turns out to be a bit stressfull isn't he? His weapon-passion...? ;-) You had fun, great!!!

I am waiting now for a Wee Neo journey-report from Paris... ;-(

i will try my hand at writing a paris report, but i'm so self critical... and my computer w o n t let me upload images for some reason...((

wee neo must be tired too, after such a long journey...gets ome rest and i'll mkae some great chicken soup!

Beautiful pictures...lovely scenery! I LOVE the parade, Chateau Frontenac...and, ahem...the weapons *winks at the Wee One*

Beautiful pictures...lovely scenery! I LOVE the parade, Chateau Frontenac...and, ahem...the weapons *winks at the Wee One*

Tres jolly, indeed. Lucky Wee Neo: he looked so serious and broody in his cinematic apparitions, but he seems to be a little naughty Devil indeed. I find particularly interesting the fact that the sight of the princesses reminded something to him...perhaps he doesn't realize he has a past outside the Matrix, and only now memories start coming back to him...It's like Matrix meets Johnny Mnemonic for a Total Recall. Jeez, the consequences could be catastrophic, it could mean the end of Wee Neo as we know him ;-)

I'm so glad you guys enjoyed reading about our adventures with Wee Neo. We had a great time with him in Québec. Well, except for that one little tantrum my husband had on day three of our trip. "We're bringing *him* again? Grrrr, I can't *wait* 'til he goes home." It was quite funny and not that serious since he did come up with some of the better shots. ;)

Jonna, I'm sure he will eventually go to the U.S. That's where his home is in Las Vegas.

Ni, thanks for the translation of Belle Gueule. I couldn't come up with anything that sounded right.

Creezy, thank you for clearing up the church/cathedral matter. Upgrade. LOL Of course, I didn't check inside so I still don't know what it was.

wanda, do you live in Paris?

OMG, I can't believe I missed this!!!!!
*slaps herself*
SHAME on me for not checking in earlier, LOL!

Aw, it's brilliant! :-D And the military pics are just hilarious, LOL! *snork*
And it's so beautiful over there... Really pretty :-) I *heart* Quebec!
Even though there aren't any pictures of maple-syrup bottles in these pics! ;-D

Great story :-) And thank Mr.Rawks for being willing to, ehm, participate in a 'menage a trois' during his holiday in order to get Krix these pics! ;-D

I'm a little late too with catching the Wee Neo report! But better late than never! ;)

What beautiful pictures and a great story too! Wee Neo gets to go to all the cool places!

Thanks for the report Zen and give a special thanks to Mr. Zen for letting Wee Neo come along on your trip! :-)
Can't wait to hear more!

Great church/cathedral pics Zen! Big thanks to Mr. Zen for helping get these great pics!

julie! i´m quite sure that wee neo remembered his amsterdam trip. specialy some special places and some special people (you)! :-D

Posted by: vika on September 8, 2004 04:01 PM
What's on your mind?.....
(new here? please read this before commenting)
Remember, this is a fan site.
Keanu Reeves is in no way connnected to this website.
Please do not make a comment thinking he will read it.
Comments are for discussion with other fans.
Thank you.