how do you say "where the hell have you been?" in Québécois? 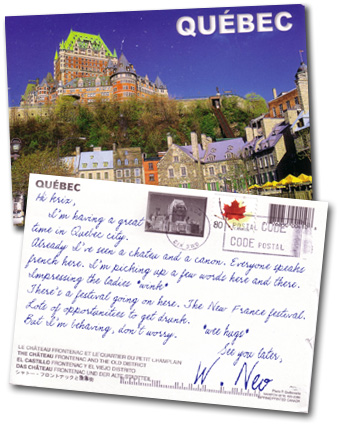 My husband and I ran into Neo in Québec City while we were there on vacation. We took many pictures. I'll send them along shortly along with a tale of our adventures. Neo decided he might also like to visit the Maritimes, so we gave him a ride with us to New Brunswick. We're going to show him around. I'll let you all know how it goes.

Wow, that lil' Neo sure gets around...

Oh hooray!!! I was wondering where he was!! Glad you caught up with him, Zenny, and I can't wait to hear about all your adventures...

btw.. that looks very charming place to send a post card from!!!!))

Yeay! Postcards from Wee Neo...can't wait to see pics and hear the stories from Zenny! :)

I have been to Montreal, but never Quebec City...I can't wait for the stories Zenny!

wow thats funny. im from montreal and actually really impressed by the fact that quebec is on wee neo`s map heheh! hope he had a great time there

Zen managed to have her secret rendez-vouz (or 'however' you spell it) with Neo! :-D
I hope Mr. Rawks didn't get TOO jealous ;-)

Posted by: Julie! on August 13, 2004 08:27 PM
What's on your mind?.....
(new here? please read this before commenting)
Remember, this is a fan site.
Keanu Reeves is in no way connnected to this website.
Please do not make a comment thinking he will read it.
Comments are for discussion with other fans.
Thank you.