So, he's occasionally romantic in the kitchen, and by 'romantic' I mean 'naked' 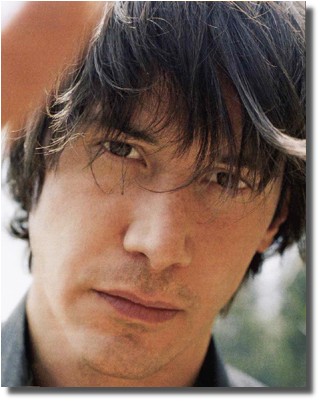 Thank you to Petra for scanning and translating this article/interview titled "The Tragic Hero" from September's German Cosmo. The scans of the original pages in German, and other photos from the article can be found at KeanuA-Z.

As an actor, he is more successful than most others, but his private life is full of strokes of fate. In September Keanu Reeves turns 40

It is these eyes that enthrall us. They seem dark, mysterious, and always a little sad. Look into them for a second only, and you will immediately want to hug Keanu Reeves. On 2 September, the boyish Hollywood star turns 40 and he has a lot to look back on. While he has reached the peak of blockbuster heights during his acting career, his private life is haunted by blows, tragedies and deaths. Keanu Reeves, who grew up in Toronto, does not talk about the dark hours of his life. But he talks about his latest film "Something's Gotta Give", his next project "Constantine" (in cinemas in February 2005) and his love for rock music and other romances.


In this movie business that loves young stars, are you afraid of your 40th birthday?

No, I don't feel that young. I am as old as I am. It won't be a special birthday. Either I will be alone in the desert, or it will be an outrageous party.

People say that the camera loves you. Do you take that as a compliment?

I can't identify with that, but I understand what they mean. The picture on the screen has little relation to reality, and in my case the camera probably hides more optical flaws than it does with others.

At the beginning of your career, would you have thought about being a Hollywood favourite?

No, I didn't have a plan, only hope. I was hoping to be able to work as an actor and to master this craft, make good movies and be on stage with high-class theatre productions.

Your first film role was in "Youngblood" at the age of 22. When did you say: Okay, now I am a real, established actor?

I haven't said so until today, honestly. I am challenging myself. Anthony Quinn once said to me: "The feeling of uncertainty will never leave you, inwardly you will always be looking for work."

Can you remember when you were recognized for the first time?

Of course. That was when I bought ice cream with a friend of mine. It was 1987, a hot day, and the guy behind the counter didn't want us to pay for the ice cream. He said: "Because of 'River's Edge!'" So we took the cones for free.

How do you nowadays deal with a society that does not respect an actor's private life?

I try to take it with dignity. You always hope that people won't climb over garden walls to take a picture of you when you are walking into the kitchen naked. I count on every person I meet to be at least reasonably respectful.

Given your celebrity status, how do you master your everyday life?

When I go out, I need a lot of luck and skill not to be beleaguered by fans. The magic word is inconspicuousness. Before a big premiere, however, there is no use in even trying. People are already taking your picture as you walk out of your car.

In your latest movie "Something's Gotta Give", your character is very interested in Diane Keaton. Can you empathise with this fascination for an older woman?

To some degree. But I've never dated an older woman. Sorry, I shouldn't say this, but to rave about an older woman's beauty takes some experience of life. After all, we are living in a culture that celebrates youth. Although youth craze isn't the whole truth...

Do you believe in true love and spiritual kinship?

Yes, absolutely, I believe in that.

How do you define romantic?

For me, romantic is sharing intimacy with another person, looking inside, but also to enjoy a sense of place to the outside. Romantic is awareness of life, it is about existing together in the here and now. Sometimes a beautiful place can reinforce this feeling. But this kind of romanticism works only on good days.

So you are more of an occasional romantic?

I am not sure. At any rate, being hopelessly in love is very beautiful. And dangerous.

What music did you choose for romantic hours when you where a teenager?

What do you mean, teenager? I still like the music from those times. The Ramones, The Violent Femmes, The Clash... When I discovered that music my world suddenly got better. I danced [to this music], felt life's pulse beat, the vibrating feeling of existing.

Was there a time where emotional vibrations were especially strong?

With a woman called Penny. She had a great stereo in the car, you could take the speakers out and stick them onto the roof. We did that one evening in the park and danced all night long. That was one of the good days...

What happened to your band Dogstar?

We are hibernating. I now play bass in a band called Becky, we will be playing some gigs soon.

Who are you playing in your next movie, the comics-adaptation "Constantine"?

A doomed guy who tries to escape from hell and even bargains with angels. I was attracted by his connection with god, which is, at the same time, his relation to the world. He is full of anger and ambiguity. There is one line which I like especially: "God has a plan for all of us. Some people like their plan, others don't." A fascinating character.

What are the criteria when you choose a role?

Most of the time it is my gut feeling. The script, the story, the character have to match my feelings.

After your rather long career, is it difficult for you to still let new people into your life?

My character, my mind, and my true self haven't changed because of the career. I always trust people until they show me that they aren't worth it.

It looks like one of those interviews that's sort of pieced together from other sources, but it's still quintessential Keanu.

Thanks again to Petra

I love a man in the kitchen *blush*

I like this quote because I make career decsions the same way: "Most of the time it is my gut feeling. The script, the story, the character have to match my feelings." I think it works because the facts tend to match the feelings.

Yep, thats my feeling here. This guy never talked in real life to a german journalist. Whenever you read about him in a german mag it's been said already before (sometimes maybe for 15 years - what makes it so ... new ;-( )

I read the interview today in cosmopolitan. Petra did a real good job! CHEERS! Petra, I found out there is a short story about Keanu in current 'Brigitte' - cute picture btw. But I don't have a scanner...

And now I am off - I feel my kitchen tantrum coming closer and closer...

...short article, Nudel!
Don't ask me for it though, I don't touch
these kinda mags - and it's not online...

...and the 'Cosmo' interviewer was not German,
the name given is Earl Dittman, if you do a google search
on that it leads you to the sewers
of Hollywood and its press whores!
So, again, I'm having serious doubts about
the authenticity of the whole thing...

yep nudel, niobe got it. And from this short article they're talking half of it about guys like Tom Cruise and Bad Pritt. But finally in the second half they're explaining that everyone who never felt in love with Keanu as an action star, will fall in love with Keanu after 'Somethings gotta give'. The rest says that Mr. Keanu had to turn 40 for beeing finally accepted as a talented and 'beeing able playing romantic roles' actor.

One sentence like 'He is like a good red wine - older/better blah' would have been still enough but they had to fill a half page. The pix is awesome btw.

One sentence to the article of cosmo. All pix are the older shoots from ADC. So they still just 'bought' this article from another mag - and put some german style in it.

Thank you Petra and krix.

I feel that kitchen tantrum to Creezy ;-)

Creezy, yes, I know about the Brigitte article. I scanned and translated it today. The "Gala" also has a one-page-story about Keanu, but the story is - uhm - crap.

Posted by: Tabitha on September 8, 2004 09:20 AM
What's on your mind?.....
(new here? please read this before commenting)
Remember, this is a fan site.
Keanu Reeves is in no way connnected to this website.
Please do not make a comment thinking he will read it.
Comments are for discussion with other fans.
Thank you.