Wee Neo in Prince Edward Island (and Nova Scotia, too!) 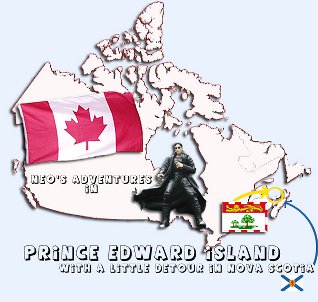 Zen really outdid herself showing Wee Neo around Canada. Here's the third and final installment of his Canadian adventures.

One of the reasons I wanted to take Neo to Prince Edward Island, other than the fact that it's very close to New Brunswick, is that it's teeny tiny, just like Wee Neo himself. It's in the little yellow circle on the Map above. PEI is Canada's smallest province. It's also the place where Martha Stewart buys her mussels. * cough * We tend not to talk about that anymore. PEI mussels are delicious however and you should have them if you ever visit there.

It is also very scenic. With lots of farms. And potatoes. 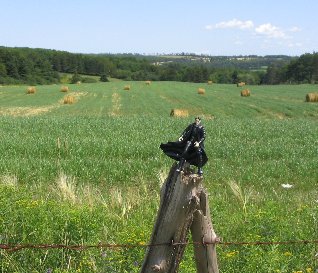 For our first stop, we decide to head for the beach. Cavendish beach is very popular and it will give us an opportunity to show Neo how PEI earth is red instead of the boring brown you see everywhere else. 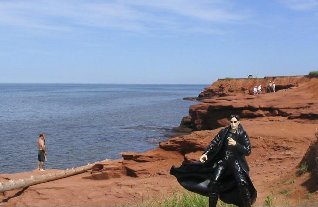 We want to get closer to the water, so we head for the dunes. They are protected now by fences so that they're not destroyed by people walking over them. Neo is neither impressed nor intimidated by the fence. 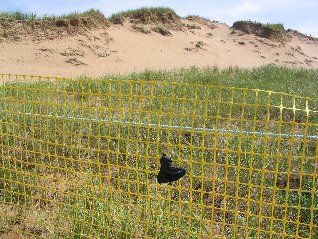 Soon he's defying convention and stomping all over the dunes. 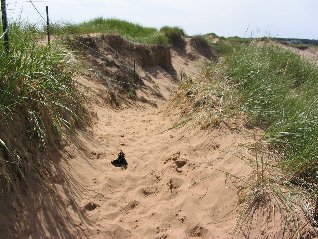 Next a 'legal' stroll on the beach. He stops to pose. 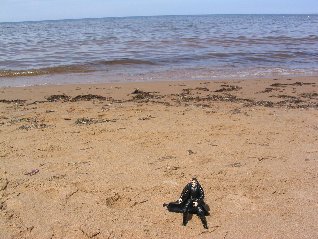 That's the Atlantic Ocean in the background!

Hungry from our trip to the beach, we head out to find a restaurant. PEI is surrounded by water, so what better place to have some fresh seafood. We happen on this cool restaurant shaped like a huge boat! There must be seafood here. 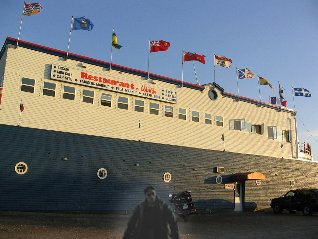 The flags on top represent each of the Canadian provinces. And at the very tip, the Acadian flag! I'm so impressed they remembered us. We decide to go inside. There is a lovely view from our table and I go outside on the "deck" with Neo to take a picture. 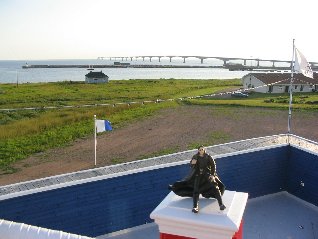 That huge bridge in the background is the Confederation Bridge which will take us back to New Brunswick. It was completed in 1997 and at 12.9 kilometres (8 miles) is the longest bridge over ice-covered waters in the world. Before it was built, the only way to get to PEI was by ferry.

While we're eating our delicious lobster and crab, Neo gets a little quiet. I ask him what's wrong but he won't talk much. I coax him with an extra lobster claw and he admits that he thought PEI would be smaller. "You know" he says looking sullen, "my size." I start smiling. I know just where to take him!

Down your drinks fellas, I tell my husband and Neo, we're going to Woodleigh!

Woodleigh Replicas & Gardens was built by a young soldier after World War II. He lived in PEI, but wanted to bring a piece of his ancestral home to it. He recreated some of Britain's most famous buildings and castles on his land in PEI. They are, of course, much smaller than the originals and therefore, totally Neo-sized!

First one we looked at, York Minister Cathedral. (This one had a sign, so I know for sure it was a Cathedral and not a Church. wink) Neo's so excited; he climbs up on top of the door frame. 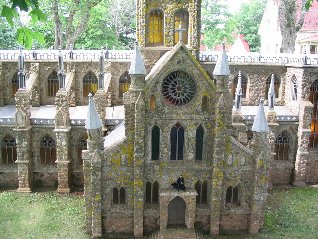 We continue with the church theme for a bit. They're so pretty. 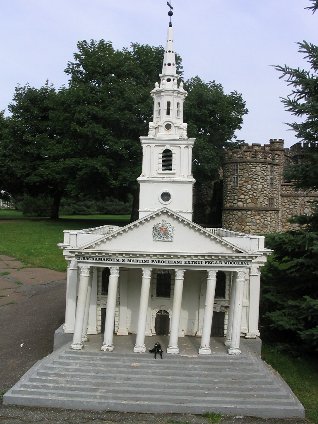 Try not to notice the fact that it's a bit, um leaning. Neo had a tiny flying incident. shhhh...He is so happy to be here, we don't want to dampen his enthusiasm. 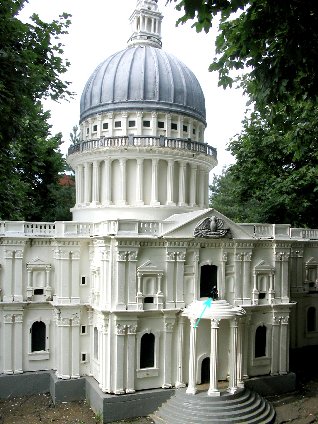 Now, Neo's coat would have played off so well on all the white here, but stupid me got him to stand in front of that black door and he's practically invisible. I might add that Neo was not at all happy with my photography technique here.

I do a much better job at the Temple of Flora where Neo pretends he's the missing statue. hee! 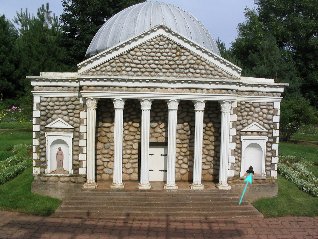 Neo marvels at all the things his size. 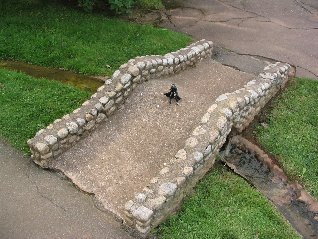 The teeny-ness of Glamis Castle... 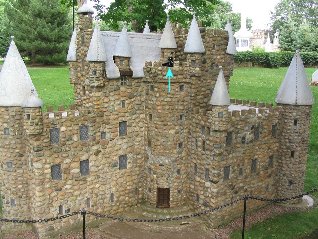 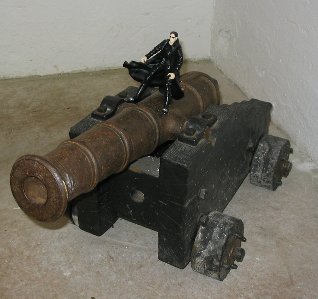 Of course, not everything was his size. The pillory was rather big, but then, for Neo, that would be a good thing. 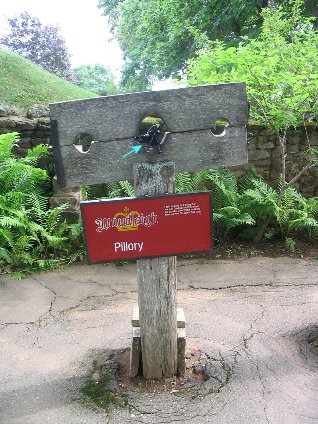 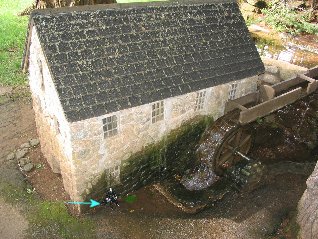 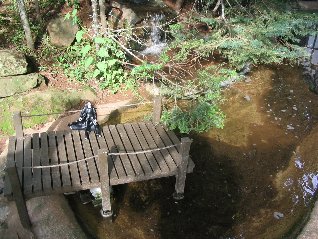 And last but not least, Shakespeare's Birthplace! 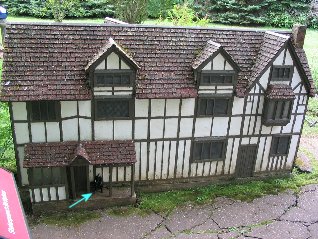 But all good things, even little things, must come to an end, so eventually, we had to go. I urge Neo to pose next to these lovely Lilly pads. He's not particularly interested, but I love them, and I can't remember ever having seen live Lilly pads before. 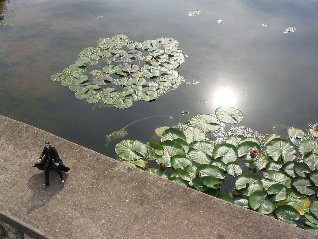 Then it';s across the Confederation bridge and back to New Brunswick. Neo decides it might be time for him to leave. He has been with us for a few weeks now. We offer to drive him to the airport. But before we do, since we are so close, we decide to take a little drive to Nova Scotia. This will be province number four for Neo and he thinks he might be setting some sort of record.

We don't have too much time, so where in Nova Scotia to go? Why here of course! 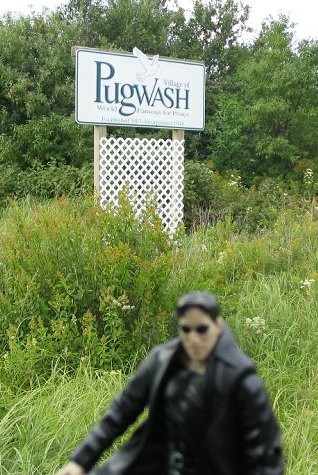 And may I report that while Panama hats may no longer be flying off the shelves here, thrice worn wrinkled suit jackets are way big. *wink*

The next place we visit is of course the winery. Jost Winery to be exact. They make some of the best ice wine in Canada here. And of course, I know you all know that Canada makes the best ice wines in the world. I mean, we know from ice. ;-) Before we sample though, we take a little walk through the fields. 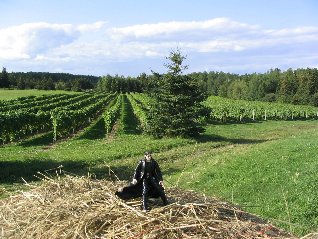 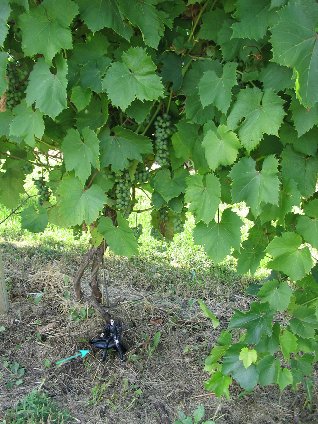 And then gets drunk on ice wine and pomme de glace and ends up in the grape smooshing barrels. 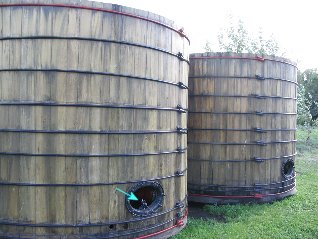 We let him sleep it off, drive him to the Moncton Airport and kiss him goodbye. He wouldn't tell me where he was headed next, but I'm pretty sure I saw his plane heading South. Hope he stays far away from the hurricanes.

I'm sure we'll be hearing from him again soon! Bye Neo!

Thank you Zen for being such an extraordinary hostess and tourguide for Wee Neo!

See his Québec adventure here and his escapades in New Brunswick here.
You can read all of Wee Neo's travel adventures here.

Wow! astonishing and so beautiful and interesting!! I wanna go where the wee One goes!!!

The "excellent adventures" of Wee Neo and company! Zenny...you've convinced me...

Glamis Castle, Zenny! I hope that's a good omen for the 'Macbeth' movie,
it's the place where Macbeth murdered Duncan to become King...
and in later times the birthplace of Queen Mum.
... and the first Roman emperor to profess Christianity, Constantine The Great, was crowned in York!

Thanks for the lovely pics and funny reports, Zen!
*smooch*

This is hysterical! Thank you for doing this!

p.s. I'm sure Keanu would appreciate you taking wee Neo to The Bard's birthplace! ;-)

Thanks for the report & the lovely pictures Zen & Krix!! :-)
I hope Wee Neo knows how lucky he is to have the opportunity to see so many places with such awesome tour guides!! :-)

Thank God they built a bridge to New Brunswick, the ferry would have eventually capsized in the water and gotten stuck in the mud when the seas dried up.

Hard to believe Pugwash is a trend setter of fashion and style LOL! I remember when Panama hats were all the rage, but that was just a trend. Hats are, however, a good fashion accessory. Suits on the other hand, remain a classic! They only get wrinkled due to wear ;-)

Wee Neo...you escaped the pillory because it clearly wasn't your size...RAWK ON little dude :-)

I can see why Martha needs her "mussles" LOL!

Zen got a Wee bit carried away showing Neo around, but I'm glad you guys enjoyed it. :D Can't wait to see what he's up to next.

What an excellent adventure!! Thanks to Krix & Zen for taking us all there! Beautiful country!! *starts looking up airfares on priceline* ;)

Oh! Neo had lobster and wine, AND the company of Zen, and I wasn't there!!! *pout*

That was so brilliant! :-D Canada is now officially my favorite country in the world! :-)
It's all so pretty and cute! Just breath-taking :-) *happy sigh* I can just taste the maple-syrup already ;-)

& LOL at the story, and at Krix's captions too! *giggle*
You're both nuts ;-D
Thanks for the smiles and the giggles :-)

Posted by: Julie! on October 18, 2004 09:02 PM
What's on your mind?.....
(new here? please read this before commenting)
Remember, this is a fan site.
Keanu Reeves is in no way connnected to this website.
Please do not make a comment thinking he will read it.
Comments are for discussion with other fans.
Thank you.