This just in: Panama hats flying off the shelves in Pugwash* 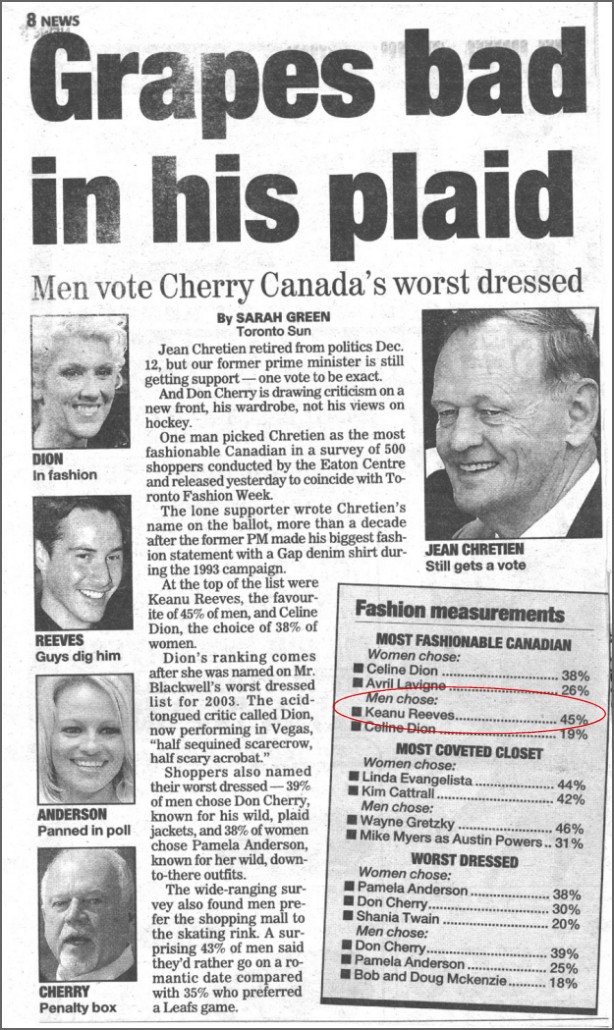 Canadian men have good taste (and I bet they taste good, too).

Thanks to Irene who sent me this article from today's Toronto Star that says Keanu is considered Most Fashionable Canadian by the men surveyed, stomping all over Celine Dion. Hee.

I suppose it's just a matter of time before taped-together shoes take the Great White North by storm.

How 'bout St. Louis de Ha! Ha!, Quebec
There's exclamations in the name! Just like Julie! Bet they have a lot of laughs there.

Those whacky Quebeckys (yes I know I spelled that wrong).

I'm a little concerned about the 31% of Canadian men that covet Austin Powers' wardrobe.

They do indeed taste good krix. I speak from *ahem* experience. *licks lips*

As for names, I've always found Saskatoon kind of funny. But really St-Louis de HA HA has to be the weirdest. Who came up with that? Have you been there Sta-cie? We go past it every summer on our yearly trip to Québec City. We should stop in sometime and see what the locals are like. ;D

Oops! I forgot to add
"Panama hats flying off the shelves in Pugwash"
*bwahahahahahaha*

I've been to Newfoundland, and I dont' recall driving through a town called "Dildo"...at least it wasn't along the coastline...if it were, I'm sure I would have noticed...it would have been protuding ha ha *groan*

What madness. Yes, we always knew Ke was the best dressed...

Pugwash...I think I have some of that at home.

Pennsylvania has a few interesting towns - start your tour in Desire, the head to Intercourse (no pun intended) then end up in Panic.

I'm still laughing! I think they must have shown Keanu in fashionable "goalie" attire when they did the survey. Believe me, I know Canadian men and you could put Queen Elizabeth in a pair of goalie pads and a jersey and they'd go wild. Of course, I'm not belittling Keanu at all...that man could wear, or not wear, just about anything and he'd still be best dressed in my books.

bah, I knew that!

I really prefer him naked though! ;)

Zen, no I haven't been to St. Louis de Ha! Ha! I have been to Montreal. That is the farthest east I've been in Canada.

A big Mwah de Ha! Ha! to krix on the Panama hats and to Chianti on her tour of Pennsylvania.

Yeah! Congrats! The German rag mags still pan him for the taped shoes and the cut-off pants, tho, after all this time, and the scruffy beard and whatnot...

My computer is alive again! :-)
Thanx for your brilliant reviews! *smoooch*

You girls are all killing me with this thread! :-D

What? OFcourse our Ke has the best fashion. Took them a while to figure out. SIgh, he's so hot and adorable. (u guys probably already noticed that one)
But only 45%? cmon he deserves a higher percentage. I heard once that a large percentage of gay men in canada have liked him since his play Wolfboy and his movie with River.

As for weird names, my friends lives on Thingvalia Rd. Very creative, huh?

Posted by: Mystery Girl on March 25, 2004 07:53 PM
What's on your mind?.....
(new here? please read this before commenting)
Remember, this is a fan site.
Keanu Reeves is in no way connnected to this website.
Please do not make a comment thinking he will read it.
Comments are for discussion with other fans.
Thank you.