Thanks to his lovely hostess Zen, Wee Neo's really getting a good tour of Canada! 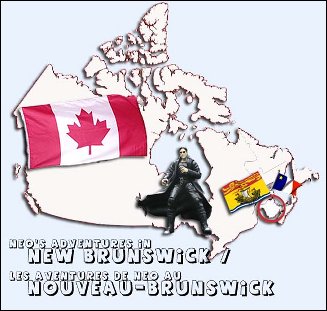 Zen : "That's New Brunswick in the red circle on the map. Tiny isn't it? The yellow flag is the provincial flag. The blue, white and red one that looks like the French flag except with a yellow star on it, is the Acadian flag. That's my flag! "

If seeing the world's longest covered bridge yawn hadn't convinced Neo that we were in fact in New Brunswick, (Canada's only officially bilingual province!), then this surely will. 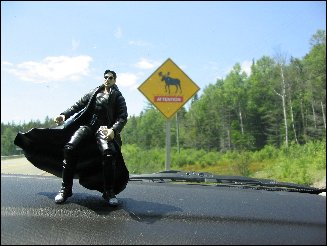 This type of sign is a fixture on New Brunswick roads. I explain to Neo that hitting a moose with your car is pretty deadly. For the moose, for the car and a lot of times for you. He can't believe something that small could cause such damage. He starts going into this complicated karate routine saying how he could easily tackle one of these "beasts". I don't have the heart to tell him the moose on the sign isn't actual size.

The first place we visit upon arriving in New Brunswick is the quaint little town of Bouctouche, a very popular tourist destination. It has lovely parks, Micmac experiences, a bike trail through the woods, an arboretum, delicious restaurants and most importantly beaches! Our first stop is the Bouctouche Dune, which is not actually a dune but a thirteen kilometer sandbar (that's 7 miles for the American and British among you) in the Bouctouche Bay. 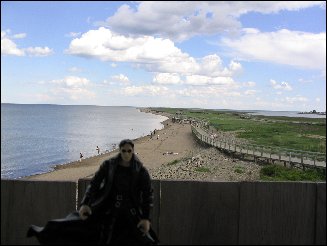 Neo wants to take a swim, but I can't convince him to take the damn coat off and I'm afraid he's going to be pulled under by its weight (krix would never forgive me), so I persuade him to come with me to Bouctouche's other most famous tourist attraction instead. 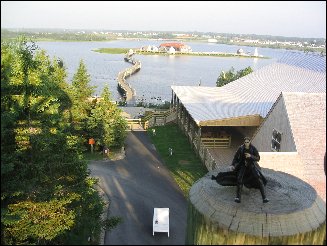 A tiny natural island in the middle of the Bay has become the home of La Sagouine and her friends. La Sagouine is the famous character in a series of books written by the most celebrated Acadian author of all time, Antonine Maillet. Her stories are based in the town of Bouctouche and so the homes of her well known characters have been built on the island. Actors portray the characters in skits all through the summer attracting French speaking people from all around the world. I tell Neo that Antonine Maillet has won France's prestigious Prix Goncourt for her writing. He acts all impressed and starts saying stuff like Bon Appetit and Bon Voyage and Merci Beaucoup and La-dee-daa...

I haul him away by the coattails. We head to the bike trails in the woods and stop for a snack. Neo flies onto a branch to get a better view of the Bay. 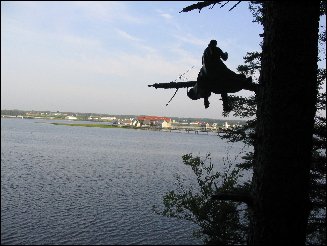 We've been traveling and visiting for a while by this time and it's time to go home. First thing I do is introduce Neo to Real World Neo. "Oh yeah", he says unimpressed. "krix and I got one of those living with us too." I swear I hear him mutter bastard under his breath. But he shakes Real's hand like a gentleman, meets Real's squinty eyes with the cold stare of his um, glasses and promptly takes over Real's tentacle thingie. I can see a fight brewing, so I turn up the music and they immediately start to get jiggy with it. 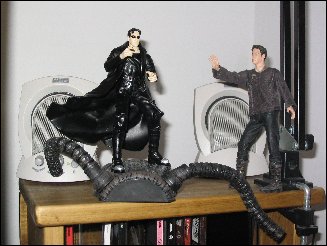 The next day, I have a business meeting in St-Andrews, so I decide to take Neo along. This is the hotel where our meeting is held. The doormen wear skirts here! Oops, I mean kilts. Wish I could have gotten a picture of that. Hee! 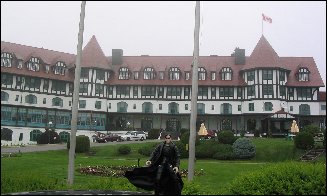 And this is where we had lunch!
Neo had a whole plate. I only had one or two. *cough cough* 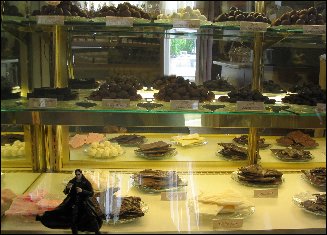 The weekend finally rolls around and my husband and I decide to take Neo sightseeing around the province. First, we go to The Rocks, a New Brunswick natural wonder. 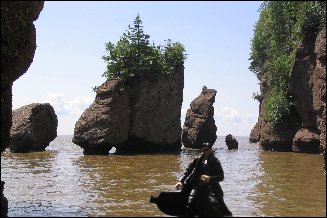 The Rocks are also called the Flower Pots, because they look like giant flower pots what with the trees growing on top like that. Here's another good one. 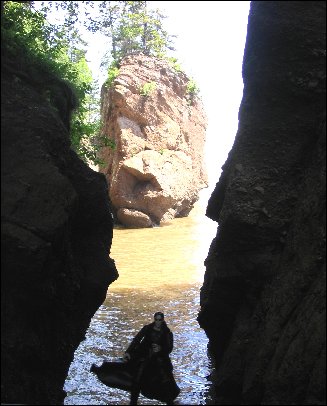 We walk the trail a bit. Notice the New Brunswick bilingual signage! 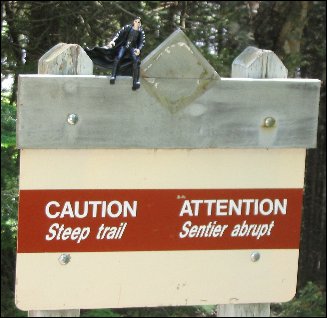 Neo and I take a picture together. 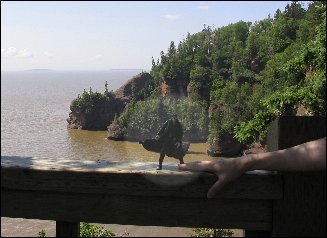 Little devil elbowed me out of it.

Next on our list, Cape Enragé. It's called that because when the weather is bad, the sea gets pretty angry. Also, you don't want to be going up there when it's foggy, which is pretty much always. Man, this place gets creepy! But we're there on a nice sunny day, so we get along fine. The first thing we see gets Neo all nostalgic for Trinity. 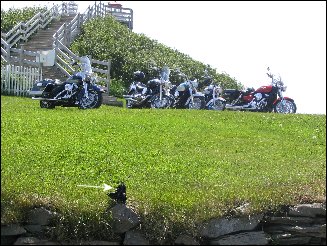 We comfort him as best we can over a bowl of thick seafood chowder. Then we cheer him up more by taking a picture of him and the Cape. 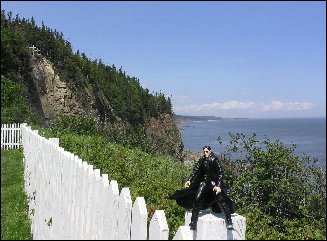 I tell Neo about the students who come in the summer to rappel off those walls and he's very curious. We go down to the beach to get a better look. The stairs are none too comforting. 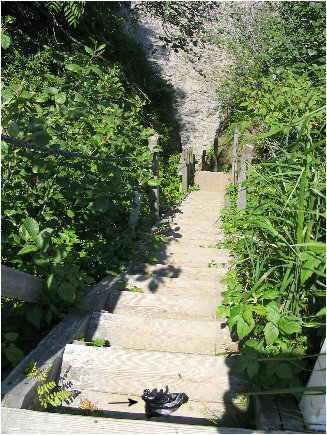 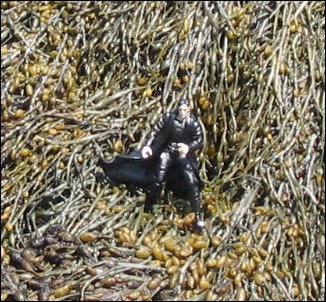 ...and then goes periwinkle gathering. Except he calls them escargot. giggle 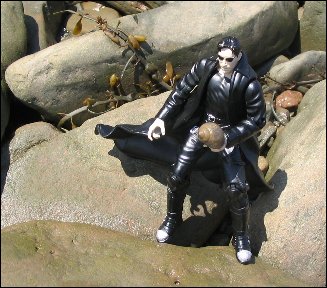 Then he decides to tackle the cliff.

He makes it to the top, but I discourage him from rappelling. I mean, how impressive can it be when you can fly.

Our last stop of the day is Fundy National Park. You cannot come to Canada and not see beaver habitat. I've circled the beaver home so you can spot it there. Neo, less than interested, picks this time to practice his moves. 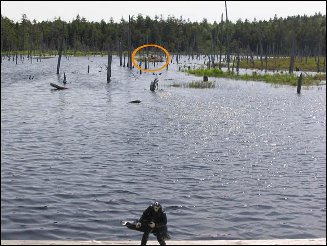 Fundy Park has lovely falls. Neo flies around them a bit, but then I get him to stand still enough for a picture. As if he minds. *Wink* 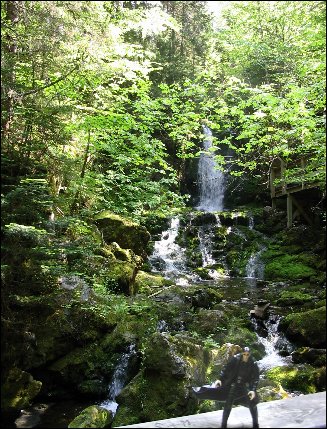 Leaving Fundy Park, we stop at a wharf to wonder at the low, low tides of the Fundy Coast. 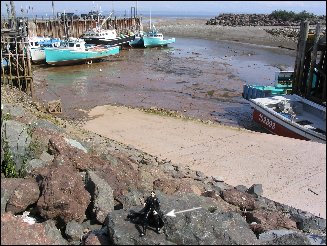 Neo goes looking for lobster. He suggests we might want to look into trapping moose with these things. You know, to keep the highways safer. 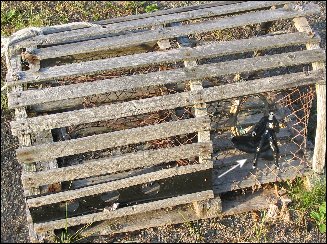 And of course, no one, but no one leaves Fundy without stopping for some famous Kelly's Sticky Buns. The best sticky buns in the whole wide
world. 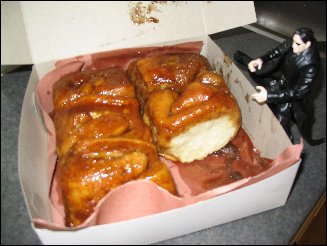 The one that's missing, um, Neo ate that one. Yes he did. Uh-huh.

And since New Brunswick is very close to the other two Maritime provinces (really, look at the map!), we decide Neo might like to visit Prince Edward Island. I'll give you a report from there as soon as we get back!

Yay and Big Love to Zen! I can't wait!

Thank you Zen! This maybe the closest I get to Canada.....what beautiful country!!

P.S. If I were wee neo I would have ate the whole box of sticky buns! ;)
They sure looked good!! :-D

ooh la la! I want to go to NB right NOW!!! thanks for sharing these wonderful adventures. That Neo is making up for being stuck in the Matrix all that time, isn't he?

thanks krix and zenny!!! *hugs*

*waves at Wee Neo and Zen*

You make New Brunswick sound so lovely, and I love the pics! Enjoy your tour of Canada Wee Neo!

How I envy Wee Neo for his tour guide, Zenny!
And what does he do?
Act bored, elbow you out of a picture, starting a feud with Real World Neo...
Ungrateful brat! ;-)

Fun, Zen!! You live in a truly lovely place.

Hee. I may have made Neo sound a little more "bratty" than he was. Really, he was a sweetie.

The last part is on its way, and then I promise I'll stop hogging Neo!

Posted by: Zen on September 20, 2004 06:16 PM
What's on your mind?.....
(new here? please read this before commenting)
Remember, this is a fan site.
Keanu Reeves is in no way connnected to this website.
Please do not make a comment thinking he will read it.
Comments are for discussion with other fans.
Thank you.