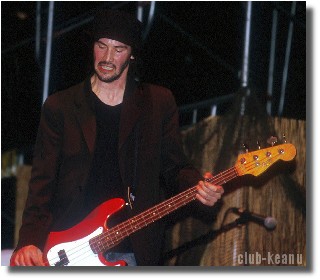 If you've seen "Larry", you might know why the sight of Keanu playing a red Fender bass just thrills me to no end.

This is just what I needed to jumpstart my busy bassplaying weekend. The Vibemerchants are getting together every day from now to Sunday, to learn some new songs, jam with some new friends and hopefully get some recording done.

Also, there are some Dogstar photos over at KeanuFan.com's gallery of him playing a nice white Fender as well.

*sniff*
I've never seen him play a black Fender like I have and now I never will -
as the handsome Ransom replaced all basses Fender!
I'm inconsolable :-(

vibemerchants next show: "Anyway, our next confirmed show is Saturday September 11th @ The Cooler, but stay tuned as we're scrambling to hook something else up before that."

they have cool site at vibemerchants.com

haha yea I LOVE it when he plays a black bass!

As wanda quoted from the site, our next show is Sept 11 at The Cooler. Our schedule can always be found on the sidebar of the VM site under SHOWS.

I had seen their website previously...but I hadn't seen the schedule there in the sidebar. I hope to catch the show next time you play Krix. Thanks.

Red "Larry" is realy hot. And what was the neils colour selection? Hmm, I guess blue with white stars :-D (don´t beat me, that was joke!)
Have a weekend with good bass link!

Posted by: vika on August 21, 2004 05:03 PM
What's on your mind?.....
(new here? please read this before commenting)
Remember, this is a fan site.
Keanu Reeves is in no way connnected to this website.
Please do not make a comment thinking he will read it.
Comments are for discussion with other fans.
Thank you.