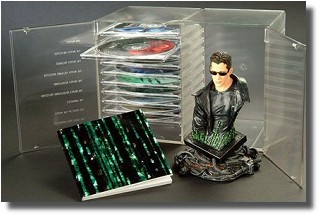 Well, the good news is you can get your super special Matrix Trilogy 10 DVD set in a special box with Neo de Milo and a cute little book this Christmas. The bad news is that the Keanu commentary previously reported? Not gonna happen. Feh. According to the report at thedigitalbits.com (via keanuweb):


There will be two audio commentaries for each film - one from philosophers Ken Wilber and Cornel West (who analyze the meanings behind the films), and one from three professional critics who hated all three films (no names given). According to Andy Wachowski, "It's the best idea we've ever had. It's hilarious. They just sit there and rip the shit out of us for six hours."

Hee! That is hilarious. I can't wait.

Also in DVD news, Mayor of the Sunset Strip was released on Tuesday. Yes, it's true that Keanu is only in it for the 2 seconds, as seen in the trailer, but if you have an interest in music and the LA scene it's definitely worth the rental.

Wait, there's more. The sucktacular Even Cowgirls Get the Blues will be out on DVD in November according to DVDanswers.com(via keanua-z). I have it on video from my "must have everything" completist phase a couple years ago. It's bad. Really bad. Recommended to rent ONLY if you've never seen Keanu as the asthmatic Julian Gitche AND you have a coupon or something.

OMG, that's a *brilliant* idea!!! I totally and utterly *heart* the Wachowski's! :-D
Well, I already did anyway, because they gave us Keanu in the coolest black outfit ever, but still.
Hee! I'm snickering about it already! :-D

I'm not too crazy about the 'bust', though. It's a bit creepy to see him without his, um, 'pelvis', and it also makes me think of power-hungry Roman emperors for some reason. So, I'll be going for the lesser version, too :-)
Oh, joy! :-D

Krix, you rule!
Neo of Milo!!
As I don't have any bust resting on my piano or elsewhere,
I think I'll forego very special ed.
I mean he can't even help me dust himself off with no arms!

I consider ECGTB to be an experience that one should live through as a true Keanu fan. Rent it for the Keanu, stay until the very end just so you can say you lived through one of the worst films of all time.
Consider it a bonding experience.

Somehow the lack of Keanu commentary thing doesn't surprise me....*sigh*....oh well, maybe someday!
Although the commentaries they did mention do sound interesting, especially that 2nd one! Hee! (I guess they must have a great sense of humor to allow that one!)
But they still can't hold a candle to Keanu commentary!

I just love the cool box it comes in. I'm definitely getting this for Christmas. :)

And since I have watched ECGTB all the way through, once, it WON'T be going on my list.

Wow! is watching ECGTB like...a hazing ritual or something? I feel all left out. I wonder if I'll be able to find it. I mean, I can't even get I Love You to Death to rent around here, and that came out on DVD...

There are conflicting reports on the DVD set from the UK, which still shows Keanu commentary, and the Enter the Matrix parts edited into Reloaded. Somehow I don't think that's gonna happen.

Neo de Milo! *snorch* (I need to think of a word to describe the sounds that come out of me after reading a spectacular krixism...)

I've seen Mayor of the Sunset Strip and it's worth renting. By the by, Keanu is in a bit more on the Backstage Pass feature, by a bit more I mean five seconds as opposed to two.

Gah. I only half-assedly paid attention to the Backstage Pass stuff as I was falling asleep and mailed it back to Netflix already.

Guess I will have to go for the Keanu de Milo -- since I need something to decorate my new office -- that and the Constantine poster -- any clues to cost??

this is excellent info... if keanu's in it i want it! last year i did christmas with a keanu theme... i don't see why it can't be so this year too...! exept i end up wanting and keeping all those way cool prezzys...sure want that keanu commentary though...pretty please...with sparkle love on it!??

anyone have curalls for carpal tunnel??

I guess I have something else to put on my Amazon wishlist now.

Neo de Milo -- i love it! i'll probably ask for this edition for Christmas, even though I already own all three films. as for "Cowgirls", just do yourself a favor and read the book instead!

what???? no keanu commentary!!! well very bad bad words, angst, sorry, fuck! sigh but thans for the link for the mayorofsunsetstrip, I could finally download it w/my friends dsl ; ) and henious, a dvd of ecgtb, that is something and that's all I'm gonna say LOL!

Posted by: tess on August 23, 2004 06:36 PM
What's on your mind?.....
(new here? please read this before commenting)
Remember, this is a fan site.
Keanu Reeves is in no way connnected to this website.
Please do not make a comment thinking he will read it.
Comments are for discussion with other fans.
Thank you.