True fact: The first boy I ever kissed grew up to be a bass player. 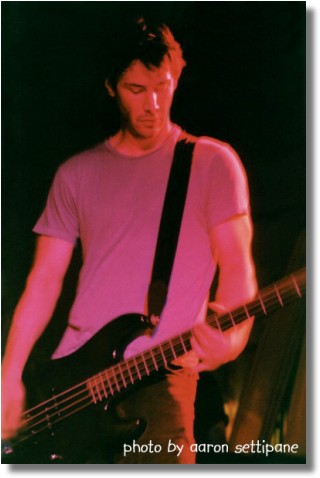 I've kissed a few others over the years...

I think I'd like the last boy I ever kiss to be a bass player as well. 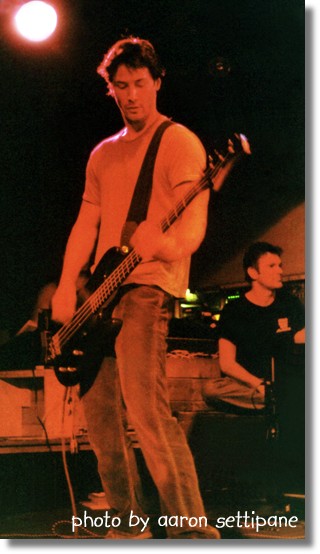 Which means from now on, I'm only kissing bass players.

-phototographer Aaron Settipane has a review of becky's Feb. 18 Viper room gig at his website, myracleworks.com

Dammit. I always miss out. *chuckle*

Or you could start playing bass ;)

P.S when do your lessons start Mikey?

But if they're timid and cold, I'm moving on immediately. I'm never again getting sucked into a relationship based on mere pleasant compatibility, consisting of mixed drinks and small talk. From now on, passion is my watchword. I don't care what they believe in, if we have things to talk about, whatever. I want someone who kisses me like he means business, by God.

And if they play bass and sneak around under a panama hat and tell me their name is Sam, well, ALL THE BETTER!

Okay. Rant over. Time for more wine and brooding.

Okay, I mean, "if HE plays bass and sneakS around under a panama hat and tellS me HIS name is Sam..." geez, too drunk to blurt decently.

Lessons begin as soon as krixy finishes hers and can begin teaching me. ;)

I'd take him even if his name were Hyman G. Rickover and he slept in plaid jammies and ate jelly out of the jar with a spoon every morning while watching cartoons. As long as he has that delicious smile and kisses like I imagine he kisses, he's golden.

Wait...is there something wrong with sleeping in plaid jammies and eating jelly out of a jar with a spoon every morning while watching cartoons? Not that I wear jammies often...

I'm with smit too, hell I'd go as far as to say he could snore and f#*t in bed, and I,d still love him. Krix will you please teach Mikey 2 how to play, or something?

[...]
But he could wear the jammies and eat the peanut butter and have a funky name and I still wouldn't kick him out of my bed! Heck, I'd let him eat whatever he'd like in bed!

I'd kiss that bass player in a NY minute! Even if his name was: John Jacob Hymer Smitt!

I'll take him, quirks and all!

krix, you should be proud of yourself I have a bad case of indigestion because of your April Fool's day celebration.

Beth - you should get your own blog. You're very entertaining...:)

ditto to what Keanuette said, get a blog Smit too!

ohhhh I forgot you're trying to cure your Keanu addiction, and a blog such as this one doesn't help.

I should, rather than coming over here like a marauding octopus spitting ink all over Krix... but I'm too lazy to maintain one. Besides, this place here and the club are so great, I'd rather just come here. I will as long as they'll put up with me.

And yes, I'm still hoping this will pass before anyone in my day-to-day life finds out about it.

Ohhh, Krix don´t mope, I´m quite sure that you will find out that Ashton Kutcher also used to play bass! *wicked sneer*

Smit too, you made me laugh so hard I allmost wet my knickers. As for your obsession as it's the same as mine and all the other's here, I say imbrace it. Pretend he is your drug of choice. At least he wont kill you, even if you overdose. And the people out there in the other world, who find out about our obsession usually have one of there own. Everyone who knows and loves me knows about my love for all thing's Keanu, even my husband of 14 years. He even encourages it. He is the one who buys all of my dvd's, book's, collectable figures etc. He even mounted a large poster of Neo to put on the wall. He truly is amazing.

yeh, rhyanhan! our husbaband are really awesome with understanding our obsessions, aren´t they.

And where in his endodermis, pray tell, do you plan to kiss him? he he he he he

What is happening with you Smit????!!! You have this crazy hidden addiction thing going on...I thought you had something real? Why would you hide anyway? Where did this thread come from??? I think you might be lost in internet translation. Friggin' computer!

As for me, my first love was an actor...but he turned out to be gay...

Yeah vika, mine feeds mine. We really are lucky. But dont tell mine that if Keanu turned up at my door right this second, and said " Rhyanhan, come away with me." I'm afraid that I would be gone in a heartbeat. Well, wouldn't you guys? (dream on rhy)!!!! Nice dream though. Who else out there dosn't tell anyone about there obsession? I dont care who knows, Im not ashamed.

I ASK ME IF I M WELCOM ON THIS SITE

I ASK ME IF I M WELCOM IN YOUR SITE?KEANU REEVES!

What does that mean cricri, I don't understand what the problem is.

Krix, you gotta have your standards and I'd say you set a good one. ;)

...and I agree Lisa, it's completely understandable why you would want to set standards Krix...sometimes there are people who don't have any.

Have a great day everyone!

PLEASE? anybody know why I'm not able to view the pics on this site? What do I do?? What type of images does this site use...

Mmmmmmm yes Keanu is a VERY sexy name indeed. I thought that even b4 i knew who he was. But alas "a rose by any other name..." , what the hell am i blabbing on a bout?
the sam jones thing is kinda interesting. There is just something about knowing something that keanu made up, even if it is a stupid code name... I wonder what he was thinking. oh well maybe he didn't even go to that hotel :-/

"someone": first, if you are going to stick around please pick a name to use consistently because calling yourself that is confusing. if you check the "take a cookie" box, the comment for will save your info so you don't have to enter it each time. As far as the images go, READ THIS ENTRY and see if that is the problem. If that does not fix it I do not know what to tell you. All images here are .jpg files.

In the future, please email me instead of filling up the comments.

CRICRI: Of course you are welcome here, as long as you keep your comments on-topic and understand that this is a FAN SITE. I am NOT Keanu Reeves, he does not read this site and posting comments here to him in hopes that he will read a message to him is not appropriate or welcome.

Lastly, drop the whole "keanu's fake name" thing. It's useless speculation. In the future, any and all off-topic comments, especially speculatory ones that start with "I have a friend who...." will just be deleted.

My bad for not just doing that in the first place instead of responding with snark.

to the topic: I asked my husband if he played bass and he said that he tried but it was much more difficult than regular guitar so he left it. What´s a great pity! I could have one at home but now I must to look for another one (or don´t you want to start with collective lessons krix?).

And,Rhy, my fellow ...(Krix *waves* please connive at this)
It´s funny but my dreamings are opposite. It is myself who want him to go away with me. Just to spend some waste time with couple beers and some good friends, meet ordinary guys and just to be. (´you know who´-You are welcome!);-)

Conniving with you on that dream Rhy and Vika

alright, i t s the same for me i m in distressed too

Posted by: cricri on April 7, 2004 01:25 AM
What's on your mind?.....
(new here? please read this before commenting)
Remember, this is a fan site.
Keanu Reeves is in no way connnected to this website.
Please do not make a comment thinking he will read it.
Comments are for discussion with other fans.
Thank you.