KeanuA-Z.com has a huge collection of screen captures from Revolutions up. 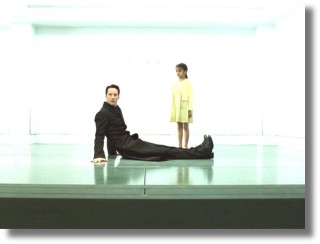 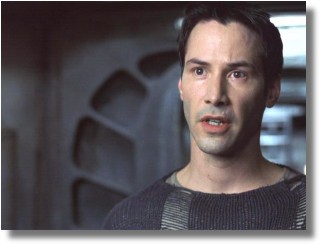 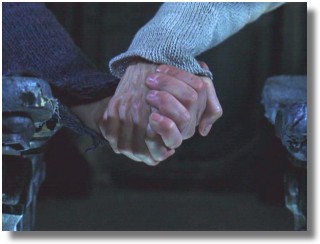 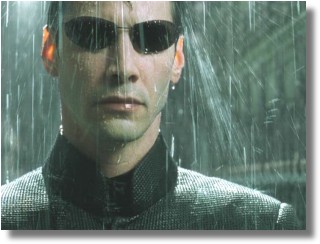 One more day until full-on trilogy goodness. I can't wait to watch all three films together.

It may sould simplistic, but to me this scene really made me realize "Hey they really are a computer program." Of course I can hear the rest of the world going, "No duh!" but until the last scene of Revolutions I didn't feel it, except in this scene.

I just realized none of what I just typed will make sense to anyone but me.

Trinity has really big hands for a girl.

I meant the scene with Neo and Sati... Now I really am leaving additional comments to those with clearer heads today.

I'm so excited and I just can't hide it....hehe

Can I come over and watch? :( I have to wait until funds replenish before I can buy the trilogy. *sniffle*

Does anyone but me feel a little saddened by the fact that this is the last movie (on dvd or in theaters) that Keanu will be in for awhile? Guess I should get my dose of Keanu while i can.

Of course you can. Mikey. Bring popcorn and lots of butter ;)

I think we Keanu fans are pretty spoiled as far as how much he works and how much we get to see him either in films or for some of us lucky ones, on stage with the band. I think it's nice that he's had a little break (a few months!) and while I'm always anxious for the release of his next project I'm glad he's taking it a little easy now that he can. I was actually suprised that 'A Scanner Darkly' is starting production so soon. I thought for sure he'd take the whole summer off.

I loved that scene with Neo and Sati...I couldn't wait to see it again the second time.

Yeah, it is going to be a long wait for the next Keanu film. I know he loves to work, but I hope he will take plenty of time for play...um, yeah, playin' bass! :-)

OK, I'm better now. But understand, Thomas A. Anderson was my entree into Keanu lovin' so...there's a special place in my heart for the Matrix movies. Plus I really, really liked Revolutions.

Butter for the popcorn or...?

For those of you who won't be getting Revolutions tomorrow, and want something to tide you over, go here and click on the "Click Here to View This Title" link. It's worth the wait.

And for those of you without sound, put Reloaded in your DVD/VCR and fast forward to the first meeting between Smith and Neo (just after Neo speaks with the Oracle), and hit play on this movie and Reloaded just as Smith enters onto the scene. :D

Well, I didn't have to wait long at all to see it. Thanks for the link, Mikey. It was rather interesting, but also disturbing in a way to hear Keanu's voice but not see his gorgeous face.

Great...now you've hurt Mario's feelings. He's consoling himself in a sewer pipe with some "Mushrooms".

What can I say? I'd take the lip scar over the pixels any day.

However, I hope poor Mario doesn't overdo it with the shrooms.

I'm going to stop this now before krixy gets mad at me and won't teach me bass. :O

Give collective lessons for Mikey Krixy...but in practice be single minded...one student at a time...if you have too many, say goodbye to the one you no longer want to teach ;-)

in some cases it must be not only collective but also corespodent lessons ...huh!

Posted by: vika on April 6, 2004 08:32 PM
What's on your mind?.....
(new here? please read this before commenting)
Remember, this is a fan site.
Keanu Reeves is in no way connnected to this website.
Please do not make a comment thinking he will read it.
Comments are for discussion with other fans.
Thank you.