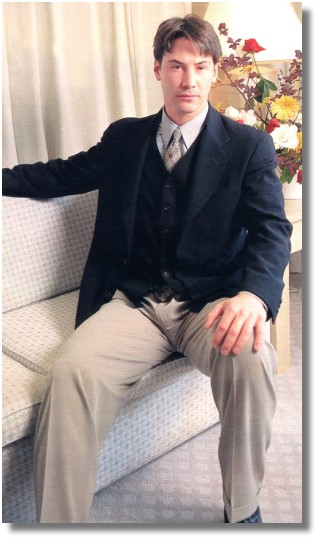 Niobe sent this Hiroshi Homma photo to complete the set of pictures in this entry.

Also, this week from freewillastrology.com...


Virgo (August 23-September 22)
Speaking on your behalf, I hereby give notice to the cosmos that it must try harder to please you. Its lukewarm support will no longer be considered sufficient for your needs. Its roundabout approach to helping you fulfill your dreams must become more direct and straightforward -- or else! Specifically, I demand that the gods, fates, dispensers of karma, or however they want to be referred to, must, no later than March 13, 2004, begin to provide you with a steady stream of satisfying interpersonal encounters. This must include, though it is not limited to, more tender intimacy, more engaging friendships, and more interesting conversations.

I'm thinking of an interesting conversation I'd like to have with him right now....

And he's on the edge of his seat in anticipation, krixy...

Like..yes Mr. Reeves that was a great Shakespeare book.. while thinking hmm, boxers or briefs.. and that's gonna pop out of his pants!! LOL...
hugs and God bless your friend

Entranced by the khaki crotch, I am. :)

pardon me while i comtemplate my very own "ode to dressage"...

"no later than March 13, 2004, begin to provide you with a steady stream of satisfying interpersonal encounters. This must include, though it is not limited to, more tender intimacy, more engaging friendships, and more interesting conversations."

Yummy! All dressed up and ready to go! I'd take some of that action!!

Hee. Y'all are sooooo baaaaaadddd...

Thanks, krix! Hope you're feeling all better now.

*blushes* You're too kind, Julie! but I guess you knew that already ;-)

YOU NEED TO GO TO THE MOUNTAIN ,I FEEL LIKE THIS IN YOUR WORDS!GOOD TRAVEL

Goodness!!
Meaty beaty big and bouncy!!!!
Er.. at least that's what some might say!

I bet he's thinking, "Dude, why am I dressed like a JcPenny catalog model." And is it me or are anyone else's eyes drawn to a certain triangular region?

Posted by: bluezzzgirl on March 15, 2004 11:15 PM
What's on your mind?.....
(new here? please read this before commenting)
Remember, this is a fan site.
Keanu Reeves is in no way connnected to this website.
Please do not make a comment thinking he will read it.
Comments are for discussion with other fans.
Thank you.