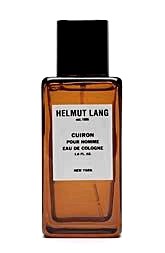 The answer to the oft-asked question "what does Keanu smell like?" just might be Helmut Lang Cuiron Pour Homme, according to this article.

I think I may hit the sample counter on the way home tonight....

Still trying to recover from what he tastes like! :-0

Finally, a chance to sniff him without security guards becoming involved.

I love that it isn't terribly expensive and regular people can walk up to the cologne counter and not be snubbed by the makeup-caked snooty lady. I plan on carrying just a hint of it on cotton, tucked into my bra for emergency sniffs.

LMAO@SHELZ! ME TOO! GO FIGURE! I had to have some Chocolate last night.. I was gonna buy and give in to Godiva Chocolate cheesecake ice cream but I didn't.. whaa..but smelling like Keanu and other stuff.. OH MY!!!!!!!!!!!!!!!!!!!..
hugs and God bless

Hmmm, now I'm curious to smell that perfume just because I wanna know what it smells like...If I run into it at the dept. store or something I guess I'll have to take a whiff:)

Hmmm, now I'm curious to smell that perfume just because I wanna know what it smells like...If I run into it at the dept. store or something I guess I'll have to take a whiff:)

I hope it stinks. I hope it's tacky. I hope I hate it. Then maybe I'll get over this f***ing obsession. Yes, I really mean it. This is driving me nuts.

:o) lol @ smit too. well, after the episode of the taped-together boots, not only are we all still here, we're drooling more than ever. i think we're pretty much doomed! lol!

Britney Spears wears the same perfume that my (late) mother did? I hope I never get too close in proximity to her. Personally, not a fan of perfume as such. I prefer people to smell like themselves, fresh from the shower...

Damn, I'm doing it again! I'm starting to agree with Smit too.

*roflmaf* Smit too, I was thinking the same thing, but I agree with casluvskeanu, we're doomed! lol

Yum. I definitely have to test out this scent. krix, you're a genius...how 'bout making that bottle on the post a "scratchy-sniffy"? :)

BTW, anybody know what exactly Cuiron means? Or is it just a untranslatable trade-name?

Joining my comrade, Smit, in the army of the doomed, I checked Curion Pour Homme french to english and came up with nothing.

Not satisfied with nothing, I checked the word "curion" in the Encarta Dictionary also nothing.

However, I did find that it might be a derivation of the curio which is defined as follows:

unusual artifact: an object that is valued and often collected for its interest or rarity

I believe that Keanu qualifies someone (never a mere object) who is valued for his interest and rarity. It would be only fitting then, he would wear this fragrance?

Wow Tyler, you really research your stuff. You must be a good lawyer. *hee*

When I saw "Cuiron" I thought of leather. "Cuir" is leather in French and adding the "on" suffix makes it sound... leatherish.

Yeah, does it smell like leather? Because we're unlikely to have such a fragrance around here. Although perhaps Nordstrom's...hmmm...

I like the romantic aura I'm beginning to sense around here..*grin*

Krix- dunno if you come to StH any more, but Rogan found the following:

Wizard magazine will turn up its coverage of upcoming superhero movies with issue #150, in comic shops Wednesday, February 25. The 50 pages on the films will include... a host of Q+As with some of the biggest names in Hollywood, including... "Constantine" star Keanu Reeves"

Won't be getting it myself, but I thought I'd give you a heads-up. Should be available in most comic book shops.

Needle In The Groove gets sent off today. Sorry for the delay.

Found this description of Cuiron on a site that sells it:

"Cuiron Cologne by Helmut Lang, Launched By The Design House Of Helmut Lang, Cuiron Is A Refined, Elegant Scent Designed To Be Worn Like A Second Skin. It's Instantly Recognizable Leather Top Note Makes This Unique Scent Unmistakably Masculine. This Evolutionary, Sensual Scent Awakens The Senses."

they have a Helmut Lang counter at Selfridges. i'm gonna pop in today and will report back.

Tyler, I admire your questing spirit, the only problem is that it looks like you searched "curion" instead of "cuiron." I think Zen is right. It's a leather-thing.

Not that this improves my helpless state. The very description of this stuff combined with a picture of him makes me go limp as cornered prey. If he grabbed me in his arms I'd run through his fingers like egg yolk.

By the way, I love the hearts. And the personals are a scream. Is there any way to see them all or are you making them up one at a time? The DAG one was hilarious.

Smit, I think you are right. I blew it. On the other hand the combination of Keanu and leather is frying my brain.

Not the smell, but the visual I have going on in my head would make a longshoreman blush.

a doomed private in the army of Smitville,

The ranks of that army are growing, me thinks. Isn't it amazing how even the thought of smell can conjure visual images.....

@#$% Can't smell anything today...got a cold! But I'm certain it doesn't require a cologn win my affection.

*sniffing at my jacket as we speak*

I am going to hunt down this cologne & spray it all over my husband.....Should I be ashamed of myself??? hhhhmmmmmmmnnnnnn....

All the notes in the fragrance are described on Sephora.com. The actual sniff-sperience would be so much better though

I can give the cologne to my husband for Valentine's Day. So he won't suspect anything. OH MY GOD, I feel like I'm cheating on my husband using cologne. This crush (sorry I meant to say obsession) on Keanu is getting out of hand. But my husband knows about it.

roflmao!! i thought i was the only one obsessed enough to look up what cuiron meant. i should have known better. now with all this chatter about what it/he smells like, a visit to the mall and the men's perfume counter is a must. but i gotta go vote tonight!! maybe i should skip it. naaah, i can't do that. but i wanna smell him!! dammit no, i gotta go vote. maybe i can leave early and...

Thanks Tawny :)
I've changed the link in the entry to go to the Sephora page since it's more descriptive.

Leather Bergamot and Mandarin - to an Aromatherapist this is pure HEAVEN!!!!!!!

Smit, the personals are transitory at this point. The original plan was to do the whole thing in a graphic and then set up a script to randomize the display, but I didn't care for the way the text was rendering as compared to the regular sidebar text so I decided to do it differently, which means I change them by hand.

It'd be funny if perfume counter staff noticed an increase in women asking about this one...hee hee.

Hi everyone,first time on. Just learning... I thought I had a problem being so obsessed with Keanu,finding you I dont feel so alone.Thanks guys.Leather omg I think i'll faint....thud.

I went searching whilst shopping and can't find this stuff anywhere, Rich's, Dillards, Lord & Taylor, Parisian. Where oh where can I find?????

Posted by: Jess on February 14, 2004 10:34 PM
What's on your mind?.....
(new here? please read this before commenting)
Remember, this is a fan site.
Keanu Reeves is in no way connnected to this website.
Please do not make a comment thinking he will read it.
Comments are for discussion with other fans.
Thank you.