Thanks to Wry for pointing me to Keanu-site.com, a huge and glorious collection of Keanu screen captures.
Part of Keanupolis' K-Team, the lovely Natalia has not only most of Keanu's films covered but also the special programs "In His Own Words" and "Journey to Success", both of which have some great interview and appearance shots. 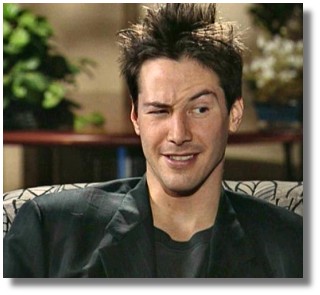 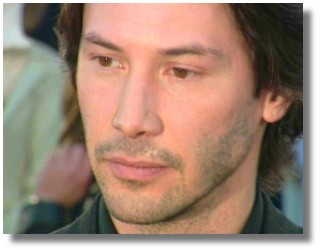 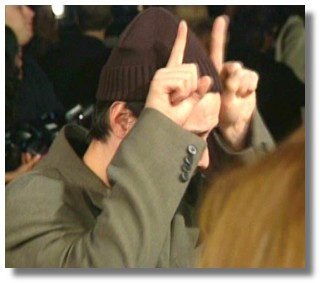 Be prepared to spend some time looking at everything.

That bottom one there was at the premiere of Devil's Advocate - perhaps he's relating some type of sinister story.

I'd like an animated screen saver of smiling eye crinkles, to the eyebrow thing, to him pounding his bass, ending with a shot of his bare feet. A girl can dream can't she?

Those are cool. Thanks for the link. :)

krix, the eyebrow one in its original size stretches nicely into a wallpaper. I got mine from Club Keanu I think.
Thanks for the link. I love those old Bill & Ted interview pictures. He looks so adorable and scruffy.

loooooove that first one :)

totally unrelated to this post: did anyone catch VH1's top 100 hotties? someone please explain to me how keanu is not on that list AT ALL??? or am i just blind?

Yeah...I noticed that on the VH1 website and thought the same thing--What an oversight!
THe list was obviously created by highly myopic individuals that seem to have lost their glasses....

Yeah...I noticed that on the VH1 website and thought the same thing--What an oversight!
THe list was obviously created by highly myopic individuals that seem to have lost their glasses....

Oh, I forgot to add--loooove the pics..most especially the first and then last...very cool
May I ask where the first one is from?
Thanks:D

I believe the first capture is originally from an interview he gave while promoting The Last Time I Committed Suicide. He was talking about his character, Harry. He called himself a lecherous, roguing, knave....

Maybe it's just the fact the he's transcended mere hottie-dom and throws off the curve.

yeah, transcended...i wouldn't call him a hottie, i would call him sublime...in fact, i call him that quite often, don't i? *hee!*

i spent 30 minutes this morning saving bunches of these pics, in response to wry's post...and the first one i saved? this top one, with the eyebrow. love it...

the link was delicious doll, much thanks!

krix~
I just have to say that I love the captions you provide for your photographs as much as I love the daily postings. I *always* hover my little mousie over them, awaiting a laugh. :)

why oh why are some people so hot, yet i will never meet them (sigh)? i noticed that VH1 mistake, too.

Posted by: jdgurl on February 1, 2004 04:15 PM
What's on your mind?.....
(new here? please read this before commenting)
Remember, this is a fan site.
Keanu Reeves is in no way connnected to this website.
Please do not make a comment thinking he will read it.
Comments are for discussion with other fans.
Thank you.