I know, hard to believe I'm milking this event for content well into the new year, but since I received the December Newsletter from SCORE, I figured I'd share the pic and article since it gives a full listing of the teams. 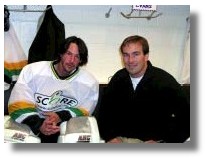 This year's event, held at the Los Angeles Kings practice facility at the Health South Training Center in El Segundo, CA was watched by a capacity crowd of all ages. The fans were treated to a fast-paced game with excellent plays at both ends of the ice.

In between periods, SCORE volunteer Mike Siegel presided over a human bowling contest which used a giant sling-shot to catapult contestants down the ice into large foam bowling pins - a big crowd favorite!!

SCORE was fortunate to have substantial media coverage of the event ESPN, Extra! and City-TV (Santa Monica, CA) ran television segments on the celebrity game. In addition, USAToday.com posted a lengthy article on its website.

The SCORE is grateful for the support provided by the NHL, the Los Angeles Kings and Mission Hockey. The SCORE team extends special thanks to Daryl Evans and Alex Axsen for their hard work, and to Lisa Fooc (emcee) and Rob Blake (who gratefully donated t-shirts for the SCORE volunteers). We are also indebted to the many volunteers who helped out, including Tracy Schoreack Candice Zee, Jeff Zanarini, John Thvedt, Pat Masson and the UCLA Hockey Team as well as many others.

The line-ups for the game were as follows:

Unfortunately, it was a PDF file and there was no way to resize the picture.

Cool Article..
Have a question pertaining to Keanu+Hockey: Does anyone have any more info about the two games announced a while ago (in Toronto i think) that Keanu is slated for? I'd love to know more details about it but haven't heard about it since the day that announcement came and went....

(Also a special "shoutout" about my own hockey team: we have won both of our games so far into the season-the first was 5 to 2 and the second 9 to 2:D *yay*
...and I'm going to try goalie within the next two practices, I think/hope:D....)

I tried to download it from the site, but with no luck...

Isnt there an event on the 17th?

The Game on the 17th doesn't have Keanu on the roster AFAIK, but Paulie Kosta of becky is sceduled to play. Info in this entry.

I haven't been able to find any more information on the games scheduled on the Toronto area in February (entry with some info here). Maybe contacting either of the venues will help. I do know that tickets have already gone on sale because a few people from one of the groups I'm in already have theirs.

Thanks a lot:D I'll try and find stuff based on the entry etc.:D

Posted by: stacey717 on January 10, 2004 07:40 PM
What's on your mind?.....
(new here? please read this before commenting)
Remember, this is a fan site.
Keanu Reeves is in no way connnected to this website.
Please do not make a comment thinking he will read it.
Comments are for discussion with other fans.
Thank you.