And lo, it was good

Excerpt from:
Beyond the Bass Clef:
The Life and Art of Bass Playing
by Tony Levin

In the beginning there was a bass. It was a Fender, probably a Precision, but it could have been a Jazz - nobody knows. Anyway, it was very old ... definitely pre-C.B.S.

And God looked down upon it and saw that it was good. He saw that it was very good in fact, and couldn't be improved on at all (though men would later try.) And so He let it be and He created a man to play the bass. 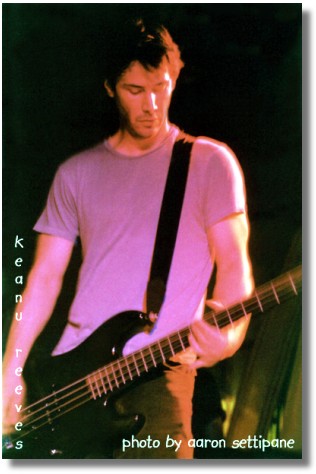 And lo the man looked upon the bass, which was a beautiful 'sunburst' red, and he loved it. He played upon the open E string and the note rang through the earth and reverberated throughout the firmaments (thus reverb came to be.) And it was good. And God heard that it was good and He smiled at his handiwork.

Then in the course of time, the man came to slap upon the bass. And lo it was funky.

And God heard this funkiness and He said, "Go man, go." And it was good.

And more time passed, and, having little else to do, the man came to practice upon the bass. And lo, the man came to have upon him a great set of chops. And he did play faster and faster until the notes rippled like a breeze through the heavens.

Now the man heard the voice of God, but he was so excited about his new ability that he slapped upon the bass a blizzard of funky notes. And the heavens shook with the sound, and the Angels ran about in confusion. (Some of the Angels started to dance, but that's another story.)

And God heard this - how could He miss it - and lo He became Bugged. And He spoke to the man, and He said, "Listen man, if I wanted Jimi Hendrix I would have created the guitar. Stick to the bass parts."

And the man heard the voice of God, and he knew not to mess with it. But now he had upon him a passion for playing fast and high. The man took the frets off of the bass which God had created. And the man did slide his fingers upon the fretless fingerboard and play melodies high upon the neck. And, in his excitement, the man did forget the commandment of the Lord, and he played a frenzy of high melodies and blindingly fast licks. And the heavens rocked with the assault and the earth shook, rattled and rolled.

Now God's wrath was great. And His voice was thunder as He spoke to the man.

And He said, "O.K. for you, pal. You have not heeded My word. Lo, I shall create an soprano saxophone and it shall play higher than you can even think of."

"And from out of the chaos I shall bring forth the drums. And they shall play so many notes thine head shall ache, and I shall make you to always stand next to the drummer."

"You think you're loud? I shall create a stack of Marshall guitar amps to make thine ears bleed. And I shall send down upon the earth other instruments, and lo, they shall all be able to play higher and faster than the bass."

"And for all the days of man, your curse shall be this; that all the other musicians shall look to you, the bass player, for the low notes. And if you play too high or fast all the other musicians shall say "Wow" but really they shall hate it. And they shall tell you you're ready for your solo career, and find other bass players for their bands. And for all your days if you want to play your fancy licks you shall have to sneak them in like a thief in the night."

"And if you finally do get to play a solo, everyone shall leave the bandstand and go to the bar for a drink."

And it was so.

What can I say, but YOU RAWK KRIX!

and so does Keanu! Thanks for the laugh!

Isn't it groovy? It was written by Tony Levin. I found this on my bass-centric travels today.
I'm still waiting on my Mustang to arrive.
Next Wednesday it looks like.

Absolutely LOVE this....
Thanks ever so.

very cool, dang, I know how you hate to wait, sorry it's taking so long ; (

I do so love how passionate you are about this bass business. One thing that is indeniable is the fact of the primalness of the bass.

reading that brought much joy to my evening, krix, and reminded me of several of my wonderful bass thumping friends. sending you silvery mustang thoughts...

And, yea verily, did a fight break out upon the stage.

And verily did the Drummer drop her sticks and jump upon the back of the Lead Singer, pulling his hair; and did she and the Bassist get dominion over him. Thus was the formation of the Rhythm Section, a divine team nodded upon by the Lord forever and ever.

And lo, did the Rhythm Section toss the Lead Singer into the crowd.

And the Stage Dive was created. The Lord did cheer, and in his insane glee, create the Keyboard Player.

(Under the influence of Swedish Fish, I'm afraid.)

Okay, but they're true, nonetheless.

That was brilliant, Tabitha. Yay for Swedish Fish.

I have a busy weekend so posting will be light to non-existant.

Well, yeah, I did know that it wasn't written by krix. I was jus thanking her for posting it.

Well, yeah, I did know that it wasn't written by krix. I was just thanking her for posting it.

Tabitha~
Very cool post. You are quite the clever girl! Do you just touch your nose and come up with these things? (Sorry...bad Bewitched reference.) I'm sure you've never heard any of those in your lifetime, right? :)

Awww...shucks, guys. Thanks. Too much sugar + MPFC.

Posted by: Tabitha on January 13, 2004 06:20 AM
What's on your mind?.....
(new here? please read this before commenting)
Remember, this is a fan site.
Keanu Reeves is in no way connnected to this website.
Please do not make a comment thinking he will read it.
Comments are for discussion with other fans.
Thank you.