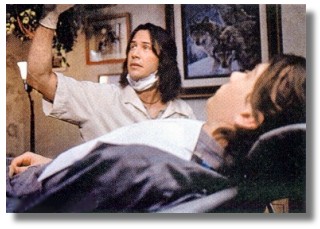 I suppose saying "I can't wait for this movie" is a little obvious when talking about his films, huh?

I wish we knew a release date for this. IMDB shows it in March but only for Belgium.
...what the hell?

You know, I always keep an open mind on films, particularly his, and not speak out until I've actually seen it, but I'm not 100% sold on this one. Has anyone read the book? I haven't, so I really have no idea what to expect here or what in the character he was drawn to that made him want to make this movie. Is this an Indie? The hair extensions just don't seem right for some reason either. Absolutely love him in long hair, don't get me wrong, these just look odd. Too unlike his own maybe?

Does anyone else feel this way, or it is just me?

BTW, Krix, I was get'in all J thinking about you and Eddieshirt this past weekend as the temp dropped to below freezing and was wishing that I had something of his to get cozy with. Sigh. I put in Chain Reaction to make me feel warmer. Don't know if it helped or not, but, if memory serves right, I think in one of your previous posts you said that your Eddieshirt was only worn in the beginning of the movie?? When I was watch'n, I noticed that he was wearing it pretty much throughout the entire show. Am I wrong? It looked blue to me. With all that runnin, he must have worked up quite a sweat in that thermal. :o) Lucky, lucky girl! LOL

I've read the book, and wasn't terribly impressed with it but that's not to say with the right screenwriter it can't be good. The key is going to be in the dialogue. I am assuming the script turned out pretty good if people like Tilda Swinton, Vincent D'O and Keanu himself were interested in it, especially considering they probably weren't paid a high salary to appear.
Dr. Perry is a fairly minor character, I think (hope) they probably expanded the role for the film. I'm excited because I'm hoping we will see some of that great subtle character stuff and comic timing that Keanu has and isn't recognized for nearly enough.

Re: my eddieshirt- There are usually many copies of the same thing in movie wardrobe & according to the costumer's tag that came with it, my particular shirt was worn in the "celebration scene". If you read this entry you'll see a capture that shows a choice capture from it.

Yeah, about his hair in Thuumbsucker from what I have seen so far (ie from the pic shown above)...unnatural and fake looking..It's not believable and so we can't believe it. I think we've all seen him in one role or another with his own longer hair and this is not "real-looking" enough to past for real. The hair looks too thick at the bottom in relation to the rest of the hair on the top and side of his head. It looks like they got to slap-happy with the extensions....
But who knows, it might be great for the movie...we shall see..we shall see:)

Man, forget the hair....look at that rockin' arm! Geez, I love his arms. Am I alone here?

ahh, SORRY, got carried away...I'm back now. But I've gotta go take a cold shower. Where's Keanu when you need him? :-)

I'm looking VERY forward to it because it was filmed in my hometown (the Portland/Beaverton/Tigard/Tualatin areas)and Keanu was actually in various places around town during that time. Didn't get to meet him though:) but still looking forward to it a lot! It was actually the fact that he filmed this movie in my town that made me a Keanu fan :)

I'm looking VERY forward to it because it was filmed in my hometown (the Portland/Beaverton/Tigard/Tualatin areas)and Keanu was actually in various places around town during that time. Didn't get to meet him though:( but still looking forward to it a lot! It was actually the fact that he filmed this movie in my town that made me a Keanu fan :)

The more I stare at the above picture, the more his hair reminds me of something. I just can't seem to figure it out. Anyway, lets just hope it looks better on screen. Maybe it's just the angle of the camera.

Krix, I remember that you had bought it, and thanks for the link, but I never did catch your review. Work has me in and out of town, so sometimes I don't catch everything. I hunted around and found this review: http://www.salon.com/books/review/1999/11/02/kirn/

It sounds okay. Like you said, the dialogue with either make or break this movie. I do love the fact that Vincent is in this movie. I loved the connection he and Keanu had in FM.

As for Eddieshirt, maybe it's a good thing that he wasn't sweating in it. Celebrating would be more of his natural smell, unlike sweating, which can turn ugly over time!

Speaking of Eddieshirt, in looking at your achives, you first put it on Nov. 25, 2002. Tomorrow will be your one year anniversary! LOL

Hum. I wish I had one. I wonder how many more of them are out there? :\

You're right. Now I feel guilty for leaving him behind for the trip.


Posted by: krix on November 24, 2003 08:41 PM
What's on your mind?.....
(new here? please read this before commenting)
Remember, this is a fan site.
Keanu Reeves is in no way connnected to this website.
Please do not make a comment thinking he will read it.
Comments are for discussion with other fans.
Thank you.