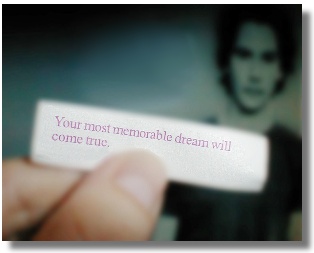 Gosh, I hope it's one of the Keanu dreams and not the one where I'm being chased by a fried egg.

Whenever we get fortune cookies, my friends and I always go around the table and read them out loud with the ending "in bed" for each one. It's so funny how they usually work out--try it! This would be quite fitting here as well, I think! :) One of my favorites is one I got a week or so ago about BEING PATIENT...in bed.

but if you're in bed, the fried egg could probably catch you. eeeek!

But I think having a dream about Keanu would have to involve a bed at some point wouldn't it?

I mean wouldn't you be dreaming about being in bed while in bed?

Well, I was speaking specifically of the fortune she's holding, instead of her dreams. But you're right...the dreams she refers to COULD go in a totally different direction! And, of course...Keanu AND bed is just a natural combination. ;) Oooh, Speed's on HBO now. Yummy.

I think Keanuvision has been Cosmo-ized. LOL Talks of "packages", "dreams", "in bed" etc... Geez, some of the innocents here could be corrupted. (whistles innocently) ;O)

Kind of off topic (as I do way too often here, sorry Krix!), but did anyone see "Lost In Translation" by Sofia Coppola? There's a brief Keanu mention, that made me choke on my drink while watching the film. There's a blonde American actress in the movie, who I read is "suppose" to be based on CAmeron Diaz, but that's just gossip and mean. But anyways, the blonde American actress talks about working with Keanu (to the Japanese press) in the movie and she does this kind of brief riff about the similarities between Keanu and her. It was a nice nod to Keanu.

"Geez, some of the innocents here could be corrupted"
Just you wait until I add "Flower" to the Keanu mix.

I've been meaning to see Lost in Translation, I've heard it was great.

Ooooh, new music? (ears perk up) I can't wait! :O) Contrary to my previous statement, I think I'm already corrupted. I enjoyed A$$ Friday waaaayyy too much! ;o)

I liked 'Lost In Translation', but I think I liked 'The Virgin Suicides' even more (Sofia's first film). I adore Josh Hartnett, so that probably had something to do with it. :O)

I am pretty sure Keanu used to date Sophia. Maybe she is still hung up on him. Then again who wouldnt be.

The Keanu mention in the film may explain why she thanked him in the credtis. She probably checked with him beforehand to make sure he was ok with it.

I think she's still married to Spike Jonze. She thanked him in the credits too.

Hey, Krix -
just wanted to ask what happened to that comment where somebody was saying they were going to meet Keanu and something about his sexuality..........
???????????

I deleted it because it was speculation on his personal life. I emailed the poster and explained this.

yea, I agree with you on that. It was kind of disturbing. Anyway, I had another wonderful dream last night about Keanu.... that I went to LA and got lost in the city, then the first person that I approached to ask for direction was Keanu... that was a total heaven....

I think you're right Chianti. It's nice how Keanu is friendly with his exes (women he used to go out with/date/whatnot) [edited]
I believe she's (Sofia) still married to Spike too. :O)

[note from krix - this is veering too far off-topic and treading on the personal. I've closed these comments.]

Posted by: Natasha on October 22, 2003 11:53 AM
What's on your mind?.....
(new here? please read this before commenting)
Remember, this is a fan site.
Keanu Reeves is in no way connnected to this website.
Please do not make a comment thinking he will read it.
Comments are for discussion with other fans.
Thank you.