Wired for the Revolution 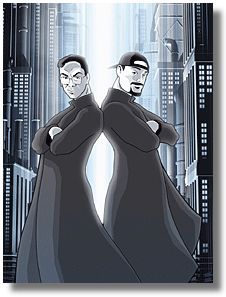 "Warner Bros. retained control of the casting. For the pivotal role of Neo, the studio decided on Keanu Reeves. (Also seriously considered: Kevin Costner.) Reeves had done poorly with Johnny Mnemonic, but the studio was high on his demographic appeal. The brothers were skeptical. "They were like, 'Keanu Reeves? Bill & Ted's Excellent Adventure? Can he do what we need?'" one friend recalls. "Now they feel so grateful they have him." The Matrix went on to generate more than $440 million in worldwide ticket sales."

Wired has two Matrix articles - The Matrix Revelations: an interesting look at the enigmatic Wachowski Brothers, and Entertainment Beyond The Matrix, in which Xeni Jardin talks to John Gaeta about virtual life, the Matrix universe and everything.


WN: How much will the new film feel like Reloaded?

Gaeta: Not much. The Matrix is a three-act play: What began underground concludes in Revolutions on the Earth's surface, in Revelations-like fashion. In the first film, we learned that people are trapped in a prison devised by machines. In Reloaded, we learn about the power architecture in that world, and discover what (Keanu Reeves' character) Neo must do to become a savior, a messiah -- to interrupt the mental slavery of that world's inhabitants. But along the way, we learn that it's not just up to Neo -- freedom is a personal choice each of them has to make.

J. sent me this article on the lack of advertising/product tie-ins for Revolutions.
I'm actually glad. The powerade was yummy, but all the crap for Reloaded was a bit much. And Samsung? It wasn't bad timing...Two Words. Ugly. Phone.

I'm avoiding bunches of other articles along with the new TV spots that are up at the Official Site.
There may or may not be spoilers lurking around every bend.

I figure I've got only two more weeks to wait, I can make it.

Oh, and Six Days 'til the LA premiere, and I've officially scribbled Joel's name out of my notebook in case you're wondering.

I'm krixy from the block, dawg.)

*hee hee, a legitimate reason to call her krixy* *Pounces on the occasion!*

Hey krixy from the block! Wearin' her rocks! I'm witcha girl! You got it goin' oooooon! Fuck dem bastards! We be awright wit our fine selves. And fisizzle, gizzle, the bizzle, somethin... izzle *ahem cough cough*

Can I just second Zen's guffawing & wonderment? KEVIN COSTNER????? Ya gotta be kidding me!!!! I thought it was a typo! I heard Will Smith, I heard Brad Pitt, but I NEVER heard of Kevin Costner being considered!! ROTFLMAO! :O)

And dang it Krix, we never did start your Matrix Revolutions Fund going (send Krix to Hollywood). You'd think some cool Hollywood person with connections would read this blog and want to help ya out. But nooooo, apparently not! A plague on all their houses! For what it's worth, I never thought Joel was your type. ;O)

Joel has his trophy wife surgically sewn to his side at these events anyway.

Joel, you'll miss us next year. I doubt you'll ever get as many offers for physical gratification. Ever. Again.

you just made my day grrrrrrrl, he don't deserve you and your hot self, pffffffffffft
go one wit yo bad self

dude, Costner is just too damn OLD! he's like 55 or something, isn't he? nonono, there is only one Neo. it couldn't happen any other way. ;)

anyone been able to buy tickets yet?

casting: in "The Art of the Matrix," that gnormous coffee table book, they give a number of back-information about the movie that isn't elsewhere (like who ARE the Wachowski Brothers). According to the book, the Wachowskis wanted Johnny Depp originally. You can even tell that from some of the artwork.

:) (nothing too personal here, I hope)

I'm so bad, I bought The Art of The Matrix ages ago and have barely cracked it open. I really should.
Thanks for the kickstart, amphora.

Posted by: krix on October 22, 2003 02:26 PM
What's on your mind?.....
(new here? please read this before commenting)
Remember, this is a fan site.
Keanu Reeves is in no way connnected to this website.
Please do not make a comment thinking he will read it.
Comments are for discussion with other fans.
Thank you.