SCORE (Spinal Cord Opportunities for Rehabilitation Endowment) has its roots in hockey. The organization was founded in March 1999, when Sean Gjos was injured while playing for the UCLA club ice hockey team. In response to his injury, Sean's friends created SCORE to assist Sean and others like him who suffered spinal cord injuries.

SCORE fills a unique space in the spinal cord injury community by focusing its grants and activities on young athletes who incur a spinal cord injury while participating in sports and by funding emerging researchers involved with innovative studies in the search for a cure for paralysis.

Learn more about SCORE at www.scorefund.org

SCORE may not realize it, but on top of helping these injured atheletes and funding research, they are making one of my dreams come true.... 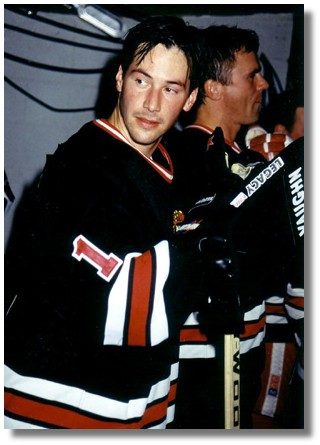 Paulie Kosta, guitarist for becky is also playing and it's actually thanks to him that I know about this event. When I saw the news in my email as I checked it at Wendy's, I may have squealed. I know I bounced into the kitchen and informed her that she was going with me (and what the hell- bring the hubby and kid along, too). I knew she'd be into it...look at the line up.

Anyway, so yes, I'm pretty excited about going. To be able to see him on the ice has been a wish of mine, and one that I figured wouldn't happen. No, I didn't get the VIP tickets (which are now sold out) so I won't be rubbing elbows with Luc, Lex and Angel (nor Keanu and Paulie). I'm hoping that Fran will be willing to take some good photos with his nice camera. I'll get what pictures I can manage. I am sorry to say that I don't have a video camera so I won't be getting any footage of the game, but I'm sure if it's allowed someone will.

So, is anyone else in the area going?

Hehehe, Keanu is just proving how Canadian he truly is. Damn, I'd love to go!

And of course they had to get D.B. Sweeney on skates. *Smirk* Toepick!

YOu don't know how bad I want to go...not just because of seeing Keanu play hockey, which would be awesome, but the sheer fact of seeing a nice, LIVE hockey game in the summer is hard to do..I haven't skated/played ice hockey since the week of hockey camp I was at the last week of june..I sooo feel the need to go skating.... I REALLLLLYY wish I could go, but it's on the fricking westcoast (and i'm on the east).. they better have a game on the east sometime soon!

well, i have to be back at work (after the summer off, mind you) at 9 a.m. on the 18th, so dammit, i can't do it. otherwise, i fucking assure you i'd be there! i still might try to figure a way out of that first day back...

darn it darn it darn it at least you guys are there! BUT ME? im so ever screwed! Im in Puerto Rico!!! but im really thinking abt it, skipping univ and the hell with everything cause i would dieeeee if i ever got to see keanu play hockey! GEEZ!!!! LETS SEE WHAT I CAN MAKE OUT OF IT! god! tough thing ahead!

BTW (i dont think this will be broadcasted but... CAN PPL TAKE CAMERAS INSIDE?) either photographic or video. just wondering! :)

Dude. I'm so excited. I can barely stand it. ALL THOSE SEXY, SEXY MEN. And you and me with a zoom lens. Life is good. ;)

holy f*cking sh*t. as if keanu wasn't bad enough, but david boreanaz, d.b. sweeney & michael vartan? i am speechless...heartbroken. why the hell can't they play hockey in new york where it actually gets cold??!!! no, i'm not bitter. i'm happy for you. really. ;) i saw d.b. sweeney when he was a celebrity ref at a rangers game when The Cutting Edge was out. That was cool.

oh, and on the cameras..remember -- FEMININE PRODUCTS

OMG if you guys take pics! PLEASEEEEEE get 'em online! Or I have some actual pics of Keanu myself so we can trade copies or negatives or whatever! :D what do u guys think! :)

I just got my confirmation email that says cameras ARE allowed. Yay!

I going to send off for tix today (for my daughter and her friend, as well for moi!!! )//
YAY!

I'll be there wearing my Luc Robitaille Kings jersey. should be fun! Been a while since my last celeb game (which Keanu cancelled out of...boo). ahh if only they'd let me play...heh.

Posted by: lomara on August 9, 2003 12:11 AM
What's on your mind?.....
(new here? please read this before commenting)
Remember, this is a fan site.
Keanu Reeves is in no way connnected to this website.
Please do not make a comment thinking he will read it.
Comments are for discussion with other fans.
Thank you.