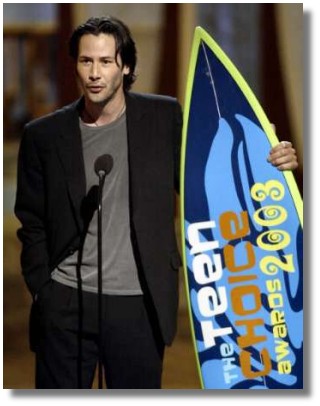 Don't forget, Hunky McStudmuffin gets a surfboard for 'Best Actor who Totally puts his CGI Counterpart to Shame in a Fight Sequence with Bad Music and We'd Like to See More of his Naked Butt in Revolutions' tonight on FOX's Teen Choice Awards.

I may make a drinking game out of how many times I want to punch David Spade in the face.

I saw a snippet of his speech on E! yesterday...:D

I'll be getting drunk right along with you Krix! ;)

well, i missed it. poop. did he say anything interesting?

Krix,
I nearly passed out when he said that!!! Oooooh I am so in lust with that man. **sigh**

He said the fans and the support of the movie (he was actually accepting the award for The Matrix Reloaded, it wasn't just for him) was like "water in the desert". It was lovely. And he was very refined and charming compared to most of the other people who took the stage.

And was Tara Reid loaded or what?

He was very sweet and well mannered. Very soft spoken as well. That voice is like butta.

You and I would be so very drunk, so very quickly playing that game. I'd thwap the little bitch just for breathing.

Then again, today, I'd thwap just about anyone.

Did you know there was a blogging 'a-list'? Well there was until most of them wound up under my crawl space.

I'm keeping one alive and above ground because he's fun to kick, makes good bloody mary's and pretty much keeps his mouth shut ever since I fed him his own tongue.

Posted by: krix on August 7, 2003 01:59 PM
What's on your mind?.....
(new here? please read this before commenting)
Remember, this is a fan site.
Keanu Reeves is in no way connnected to this website.
Please do not make a comment thinking he will read it.
Comments are for discussion with other fans.
Thank you.