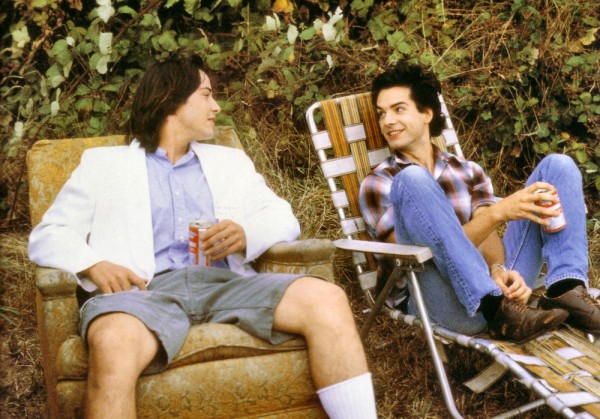 Of all the films archived in the Backlot, Permanent Record has gotten the most attention. It seems the song sung at the end of the film, Wishing on Another Lucky Star has a special place in the hearts of many people all over the world. Early on in the comments there were requests for a copy of the song and a helpful fan passed along J.D. Souther's version. Then when the film was recently released on DVD, another fan sent me a copy of Jennifer Rubin singing it captured right from the movie. Most recently, another talented fan took the time to work out the chords and share them so fans could pick up their guitars and play the song themselves. For that, to get the mp3's, and to read the comments from fans about it all, go to the PR entry at the Backlot. It's a shame that I've had to close comments at the Backlot due to spammers because it's pretty neat how folks came together around the movie and the song.

Oh, and the title of this entry gives me a nice little segue into mentioning that I'm going to see The Violent Femmes tonight!

Thanks Krix... I had forgotten about the Backlot. I didn't realize that the mp3's for this song were there. Thanks for bringing it to our attention.

glad to have you back!!!

Here's hoping the VFemmes played a good set at their LV gig!
*hugs*

Thanks for pointing out that the mp3's are available at the backlot. :-D
I never saw this movie until last year when the DVD was released and I really liked that song!

Hope the concert was good last night and I see that you will be gettin' your Reeves on tonight with your band! Have fun! Rock On!!

The Violent Femmes show kicked all kinds of ass. We had a really great time. The Femmes are one of my all time favorites, so it really was a thrill to be there, the venue is mid-size and we were pretty close on the floor.
And guess what kind of amp head Brian Ritchie plays through?? Gallien Kruger-800RB! How cool is that?

btw - how's Cheryl? Does she ever come online?

I always thought she was one of your pseudonyms... ;)

I've not heard from her in ages. The list we were on is pretty quiet and she stopped doing the essays way before that.

No, no psuedonyms. I'm always just me.

I love the Violent Femmes, I actually thought of them while listening to your band...you guys have a VF feel. And that's a good thing.

Yeah I miss Cheryl too...I only read her reviews after the fact and I read every one of them. Interesting how much people want to know about PR...

FYI...I have the soundtrack to "Permanent Record;" if anyone wants a copy, I'll be more than happy to burn one for you. I sang "Wishing On Another Lucky Star" on stage in high school, as well. My fave movie, and song.

throwing a party 2006 before i find my permenant dance partner unless he finds me first, oh i forgot he found anyway you guys please don't start fighting. find your dance partners, please

hope to see you soon.

throwing a party 2006 before i find my permenant dance partner unless he finds me first, oh i forgot he found me anyway you guys please don't start fighting. find your dance partners, please

hope to see you soon.

have such a good time tonight, I know you will, hey set up a gig with em!!!
xoxo

Posted by: lori on August 10, 2005 03:31 PM
What's on your mind?.....
(new here? please read this before commenting)
Remember, this is a fan site.
Keanu Reeves is in no way connnected to this website.
Please do not make a comment thinking he will read it.
Comments are for discussion with other fans.
Thank you.