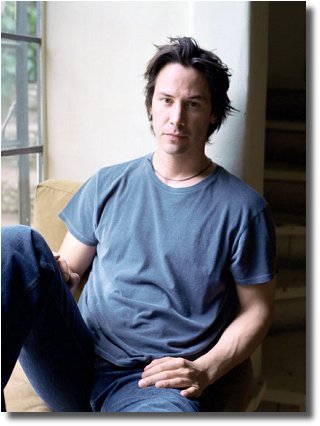 Not only is Keanu hot, but he's also cool, beloved and apparently fecking loaded.

An embarrassment of riches. Who needs loaded when you're hot, cool and beloved?

Well, Zen, that's an extra which gives you freedom. And don't even go with the old line "he's rich, but is he happy"? (just read somewhere...). For goodness' sake, don't be silly: try and be both sad and penniless, and then tell me.
Anyway, when I read such reports about Keanu, I always congratulate myself on my good taste. I know, a bit self-centred, but Keanu is the evidence I have a natural talent for choosing the best.

His random acts of kindness and generosity that we will never hear of are just as beautiful.

OMG! how can he stays so normal, so charismatic and at (least) so hard-working? just be yourself, keanu!

just right Vika!I also am very enthused about him still being exactly the way he is! but if he were otherwise none of us would be writing all this here, would we?
to put it into very few words: we all know why we like him and I just think that we all are on the same wave length. Love to Ke! Love to you! smile

Don't show me that pic! The underside of his thigh is the apple of my eye.

Can I have that under my tree this year?? Just kidding of course...well maybe not! I've allways loved your work Ke, and I know that I'll love it for years to come.

LMAO@KEANUETTE You are sooooooooooo funny girlfriend.

He is so the (Mr.) right man for my daughter. Do you think her being 25 yrs younger than Ke is a major problem?? LOL He can call me mom......in a few years of course. I can just see the beautiful grandchildren......Is it so wrong to want this for her?

I wish I had his email too! I would intrigue his interest uh, some how! hee, hee

ummmm... i am, completely unprovable of course,
the reciepient of keanu's ramdon acts of kindness...

through a mutual friend, who i havent' really kept in touch with and i have no ikeida if the one does either...) that man actually did a very nice thing for me, a person who a) he didn't know) and b) whatever b is... anyway...
he paid for me to have some special treatment in the pamper your friends friends you don't know category... (people do t h a t all the time!)
it was very nice and especially because i was working 7 days a week (teaching web design on weekends in Glendale) and was extremely frazzled exhausted padded.....
see! he was reaching out to me all along!!!
))))))))))

it was really fun having him beep through on the call waiting while i was on the other line!
oops! i tried to make an emergency break through... *sigh!*

Seems to me that pampering and protecting your friends becomes necessary when there is no other alternative being provided for safe passage...although the friend of a friend thing is reaching a bit.

Did you give a shout out to your "homies" like they deserve? Did you give out a little fan girl squeal before or after the pampering started? Why were you trying to make an emergency breakthrough...was it successful?

No wonder the man played Budha! He is so cool and we don't need to know how much money is on his bank account to like him!

I'm told that today is an important Buddhist celebration day - so this is quite a timely news piece. Material wealth isn't something that the teachings of Buddha seek out, and we all know that Reeves doesn't flash his cash in a personal glorification way. Good luck to him and to the charities he supports with that fortune.

the fan girl squeal! ))))
i do that well!
i think i've got that down pretty good!

he is wonderfully made... and from my personal experience i know he is genuine... inside and out!

lizzieeeeeeeeeeeeeeeeee....
K E A N U on the bleeping phone!!!!
EMERGNECY BREAKTHOUGH REQUIIRED!!!!!
actually i just was very patient.
can you imagine... "i'm back... yyah... that was keanu on the phone..." OH.... really????
tha'ts nice....
MGMGJGJEOPgt4kl;rnbrgo4wv;gjvvgfj pes'
well... needless to say!

there was/is no alternative or substitute for the one.... that moment was/ is very important to me... very spicy....

I'd say his package is loaded!

Oh wait, you were talking about money....ooops!
;-o

As for his money, I read something the other day that reminded me of Keanu: " The best thing a man can do for his culture when he is rich is to endeavor to carry out those schemes which he entertained when he was poor"- Henry David Thoreau...
I'd say that Keanu does that pretty damn well. Well, actually I don't know if he was ever actually poor, but whatever you get the point.

"Look to your health; and if you have it, praise God, and value it next to a good conscience; for health is the second blessing that we mortals are capable of; a blessing that money cannot buy." - Izaak Walton

Posted by: lizzie on December 8, 2004 09:24 AM
What's on your mind?.....
(new here? please read this before commenting)
Remember, this is a fan site.
Keanu Reeves is in no way connnected to this website.
Please do not make a comment thinking he will read it.
Comments are for discussion with other fans.
Thank you.