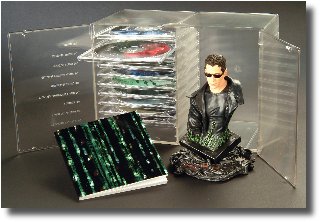 The bigass Matrix DVD box set hits the stores today. I'm not rushing out to buy it due to both time and money but I'm sure I will eventually. I expect the Keanurati will have lots of screenshots and whatnot by the end of the week. I know I'll eventually get it because I'm a sucker for those extras.

For insights into the subtle direction of actors, watch as Larry Wachowski gives cues to star Keanu Reeves, suspended on wires for a fight scene, in a manner Ingmar Bergman may never have considered: "Head jerk. Then thrashing. Then a big thrash. And another one. Then clench. Tighter. And die."

-from a Time magazine article about the DVDs

Actually, now that I think about it, I may have heard those exact same instructions on a date once.

Yeah I didn't rush out to buy it either, even though I really really wanted to for the bonus Constatine footage.. but hey.. I will get it eventually too just like you.. and I am also a sucker for the bonus footage ( and being a movie collector they are always nice, but I really enjoyed The Matrix movies so they are a nice bonus )..

I've got mine on hold at Suncoast Video, waiting for me. Can't wait to get it.

I guess I screwed up. That is not your surprise.

I dunno....having a Neo bust...it's just a bit over the top for me! I suppose it's a collector's item, but where the heck would I put it? The extra stuff is cool, though. But I won't be getting this...I already have all the Matrix films and their bonus discs. My husband would look at me funny if I then went and spent $50+ on this stuff, LOL!

But you guys enjoy! It's a nice perk for the holidays, for sure!

Any other year, I'd have been at Bestbuy at lunchtime today, but... this time, I'm asking for the set (not the one with the bust, the other one) for Christmas from my family. I'm looking forward to the new DVD version of the first film! and the background stuff... the commentaries? not so much. I may never listen to them. I find I just would rather watch the film itself whenever I try to listen to commentaries.

And when would I have time to watch them between now and Christmas anyway.. :(

I'm keeping my fingers crossed also that other keanu fans will have the content of the Constantine disk up later this week...

I just don't have the time either.

Keanuholic has some great grabs from the extras already.

BWAH!! How did I miss that last line, krix?

*dissolves in puddle of laughter*

Don't crucify me, but I think I'll pass, even if I manage to go back to my home some day soon.
Dr. West is too tiring for me (hey, I only have a doctorate in Lit.), Ken Wilber too esoteric
and I never knew the Vogue had a film critic, much less a top critic, as TIME reports.
If they had chosen Roger Ebert...
oh, and for good grabs, lots of them, go to CK

I'm determined to get that set for Xmas, either way, as a gift, or as a gift from myself....

Just don't have the time to watch them b4 then anyway. I mean, if I get them before Xmas, then it would be too tempting for me to use up time I don't have.

i am, for some odd reason, completely reevesinspired with this new acquision....
they will be played tonight!

as i am unwrapping the box i notice that the production value is high! total quality...
if you want to give this as a gift to your self or a loved one or even to someone you don't know...

a n d he smells good!

I bought all the matrix DVD's and Revisited and now there's even more....Couldn't they say that before? I can't afford this.. * sniff* Damn it sucks to be 16 ;P

I hope they release the extra's independently (is that correct grammar?) cos' I want to see Neo swearing too!

*does a head jerk, then thrashing, then a big thrash, and another one, then clench, tighter, and dies*

very interesting... we never think about the bluepill but, since you reminded me...

taking, in this case, the idea that if the blood is the life and red blood is oxygenated....

I wish we lived closer and could share the discs but I haveta tell you that I am loving the commentaries. Cornell & Ken are so good at putting into words everything I felt about the trilogy. Now I have to go back & listen to the idiot critics. It is my duty.....

I wonder if it's even released here in Holland. Does anyone know? And does anyone know if you can buy those discs that are grabbed at CK on their own? Without the rest of that expensive package ={

okaaay i did it ! i bought it...can ya seriously blame me ?? considering im 34 and my bedroom looks like this

i thought it was well worth the $60 BUT!! all i got for my $$ was the 10 dvds in a box, there was no Neo bust or free scripts, that ive seen offered on some websites, duuude!! thats messed up :\ oh well, looks like its gonna be a keanufest this weekend :D

Shanice, it does suck to be sixteen. Don't worry, Xmas is coming!

I'm glad to hear that the commentaries are good. Usually commentaries put me to sleep. Do they, ahem talk about Keanu at all though... er.... just wondering :-D

That reminds me of my room too, w/ my matrix poster right above my wall above my bed, and if I see correctly, those are X-mas lights up, which I also have. Not just because it's xmas, but because I like the colors.

yeh Cornflakes, they are xmas lights that i had on my ceiling all year long, i had them covering the entire ceiling then had a really close-mesh black material covering them, so that at night it looked like a starry sky, really kewl looking, but i have since taken the lights n material down :\ but The Matrix stuff is all there heh

nice to know im not the only 'insane' one here hehe :P

Cornflakes, so cool you got that Constantine disk for free. I'm so jaleous. It suck to be Dutch too y'know ;) What's your email?

Because I'll have another one once I buy the box set, and my friend might get one and she doesn't really want it. But who knows what will happen.

Posted by: Cornflakes on December 13, 2004 09:42 PM
What's on your mind?.....
(new here? please read this before commenting)
Remember, this is a fan site.
Keanu Reeves is in no way connnected to this website.
Please do not make a comment thinking he will read it.
Comments are for discussion with other fans.
Thank you.