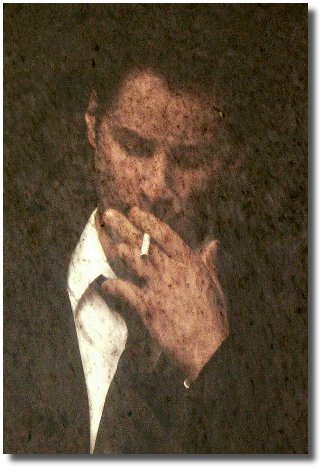 John Constantine is a prick.

Also, if like me, you're waiting for someone else to buy you the bigass Matrix 10 DVD set but you still want to check out the Constantine Preview DVD mentioned at the start of the SHH article, click here.

Thanks Jena and Paula.

Yeah! So take that you grammatically challenged bufons.
Go Krix!

From the people who were supposed to be so ingrained in the Constantine myth and mystique? They were so concerned that Keanu couldn't portray Constantine the bastard, and he seems to have done just that. I guess they don't know as much about JC's persona as they professed. Is there such as thing as comic-book-reader pretense? The emperor has no clothes, and apparently he's just a skinny geek.

As Nudel already said on numerous other occasions:
they just seem to be a bunch of high-school kids
who think it's their job to judge acting skills!
And they seem to confuse the character of the role with the character of the actor...
Here I am wondering what WB wants to achieve with these test-screenings!?

I am sooooooooo looking forward to seeing this .. Can't wait til it comes out..

"I don't have a doubt that it will do well when it comes out next year but I don't think I will see a sequel with Keanu's character in it. "

Hate to burst th person's bubble, but ususally the main character is in the sequel.

Maybe the ending makes it so that the sequel might not have him in it, couldn't say haven't seen it, but I doubt it.

Plus, like Krix said, John Constantine ISSSS supposed to be a prick. If you don't like J. Constantine... DON'T BLAME IT ON KEANU

Gah. Had to get that out.

Thanks for that link Wanda. Very interesting reading.

"Constantine"...it's a different movie from "Spawn."

Posted by: lizzie on December 8, 2004 09:35 AM
What's on your mind?.....
(new here? please read this before commenting)
Remember, this is a fan site.
Keanu Reeves is in no way connnected to this website.
Please do not make a comment thinking he will read it.
Comments are for discussion with other fans.
Thank you.