there is no squeek! 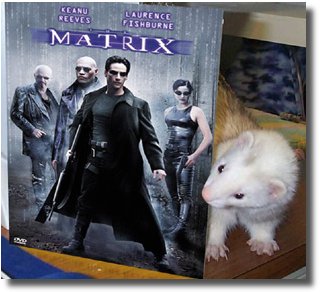 News-Medical.net has an interesting article about a study that involves 12 ferrets watching The Matrix. Hee!


Weliky, in a bit of irony, set 12 ferrets watching the reality-stretching film The Matrix. He recorded how their brains responded to the film, as well as to a null pattern like enlarged television static, and a darkened room. Movies capture the visual elements that are present in the real world. For instance, as Keanu’s hand moves across the screen for a karate chop, the image of the hand and all the lines and color it represents moves across a viewer’s visual realm essentially the same way it would in real life. By contrast, the enlarged static—blocks of random black and white—has no such motion. Weliky was able to graph the movie-motion statistically, showing essentially how objects move in the visual field.

The article goes on to decribe two suprising discoveries made by the researchers about how young and adult brains process visual stimuli differently. It's very interesting.

Of course, there's no mention of the third and most important breakthrough... 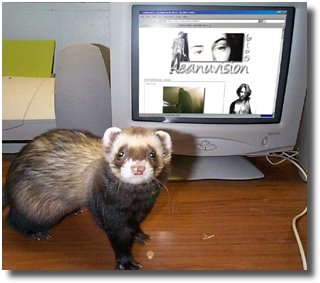 I guess that explains some of the less coherent comments we get here from time to time.

You really know how to hurt a guy.

believe me (us?), V., you are NOT of whom krix speaks. we all know you're not a ferret, for Zion's sake!

and besides, you called keanu "sweet and earnest." ferrets don't know the meaning of sweet, though they can be earnest to a fault.

Hey now...you're going to piss off the ferret people. All the ferrets I've met (two) have been pretty sweet.

Finally! An explanation for those "less coherent" comments. Ferrets. Thank goodness. I feared for while that they *were* in fact coherent, and that I was just too thick to get them.

You gotta be impressed with Ferret taste though. :D

My favorite part was from the last paragraph...
"...theres nothing to say that our understanding of the world is accurate. In a way, our neural structure imposes a certain structure on the outside world, and all we know is that at least one other mammalian brain seems to impose the same structure. Either that or The Matrix freaked out the ferrets the way it did everyone else.

That last line has made me smile all day.

mea culpa, ferret people! i must admit i've only known two ferrets, and neither of them could define "sweet." so i made a glimmering generalization...

Ferrets in front of the TV watching The Matrix...who would have thought!

Regarding the young ferrets I liked what Weliky said here:

"The eye takes in an image and the brain processes the image, but 80 percent of the activity may be a representation of the world replicated inside the ferrets brain."

I think he's suggesting they create an alternative reality in their own minds, or in essence, they are caught in their own "matrix." Who wouldn't be freaked out! LOL!

...and V...if I wasn't so busy commenting on sandwiches lol, I would have said I thought your remarks in the previous post were both "thinky" AND sweet :-)

Compare with human beings' malevolence and lacking of self-knowledge, I haven't found "ferrets"' earnest is worse.

That's the cutest thing I saw this week! ^_^

facinating article. for me it translated into brain memory being like muscle memory. Sure makes the idea of a 'matrix" more "inevitable"??? Maybe I should take this comment to the Matrix site?? lol

i see some of the ferrets have raised their furry heads. :o)

Ferrets are cute, but they have a nasty bite! That's why I wouldn't want one as a pet LOL!

those ferrets are cute!

those ferrets are cute!

Who is using ilovejoel@keanuvision.com? Is this a real addy related to your site or someone trying to send virus via email?

Love the ferrats, wish they would do one on the Presidential debate....

Yes, it's been spoofed. I no longer use email from this domain so if anyone ever receives ANYTHING from a keanuvision.com address, please delete it. The only exception is the paypal one, and that will only be transaction related.

My legit address is keanuvisionary AT gmail DOT com.

yupee, i can do my own research with matrix revolutions and guppie fish! my husband gave me dvd for b-day and fishes are prepared like every other evening in front of monitor. this´ll be for nobel price! i feel it!

To heck with the research...I wanna watch the movie! ;-)

Hi everyone, I'm a ferret parent in addition to being a Keanuholic. Those pics are adorable. My little girl is also a Keanu fan, but her span of attention is about 10 seconds long, she hasn't watched a whole movie yet!

I wouldn't have any other kind of pet! :o)

hi everyone! fishes´re doing well (a little bit unsleeped) but what about krix? were is she?
hm, and did anybody heard about keanu?

oh, krix, i checked the vibers and now i know that you´re doing bass things!*i wanna be there!*
you rawk! have a great night!

all keanu's movies are my favorites... but i love the scene in the first maitrix when it's the ok corral shoot out... where the camera is around his hip level and keanu's hand stretches in preparation and his side shifts slightly...omg...

an angel in the clear blue sky
is this the earth? my oh my...
let me walk around what do i see
something called a m o v i e...

guys... i fess up.... i watched that one every day for over 4 months... i didn't get tired of it
i learned something new with each viewing, my life becoming enriched and even blessed by the sheer precision and richness of filmmaking, acting, etc... and the presentation of trut hand wisdom for and eager audience of today.
but i digress... you all know of this significance... it jus gets frustrating when you yourself can't seem to measure up... but we do try.
)))

That domain thing has happened to me also, so if you get any email from keanua-z.com, just ignore it.

I liked this article, but wonder why they wasted their time. I'm sure there's more important reseach to be done out there - like finding the cure for cancer.

Who's ferret's in that picture? he/she's really cute!

oh nevermind I read the tag thing that shows when you hold your cursor over the picture... what's that thing called anyway?

i found this about our ferrett:
Where do Ferrets Come From?

A great deal of mystery surrounds the origins of the domestic ferret. Archeological remains of the ferret have been dated to 1500 BC, and most people place the origin around the same time as the domestic cat (which was probably during dynastic Egypt). The ferret was probably bred from the European Polecat (Mustela putorius), and some use the scientific name Mustela putorius furo. It is also possible that ferrets have the Steppe polecat (Mustela eversmanni) in their ancestry.

so nice to see the vibes are rockin' with the vibemerchants and g r e a t to meet nudel!
hope your trip back home was nice!
;-)

Posted by: shelz on October 12, 2004 07:36 AM
What's on your mind?.....
(new here? please read this before commenting)
Remember, this is a fan site.
Keanu Reeves is in no way connnected to this website.
Please do not make a comment thinking he will read it.
Comments are for discussion with other fans.
Thank you.