washing the red pill down with green kool-aid 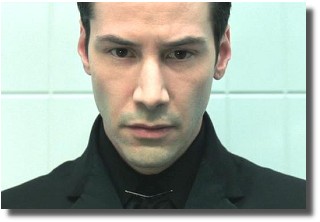 Unless you've been trapped in limbo or living in an underground city near the core of the earth, I'm pretty sure you've heard that the marketing team over at WB is set to give us red pill addicts an overdose with a Matrix 10-disc DVD set just in time for Christmas....

In case you haven't, here's what the set (which should come with its own APU to carry it) shall include:

New cut incorporating 55 minutes of footage shot for the Enter The Matrix game.

The Science Behind The Fiction - Is the notion of a real matrix plausible? An investigation of the technologies that inspire the metaphor of The Matrix

The Burley Man Chronicles - The "human" story of the making of The Matrix, as well as the game Enter the Matrix

Rave Reel- A club-oriented montage of unused and newly edited footage from Reloaded.

Spoofs Of The Matrix -The "Best-Of" these various clips

Seems like pretty much everything a Matrix fan could want, right?

Well, except for that DVD standard- DIRECTORS' COMMENTARY.

That's right. The Brothers W. still "don't wanna talk about it". Instead, there will be commentary by Cornel West, who also appeared in the films as a member of Zion's council and by Ken Wilber who is apparently some fabulous philosopher and a good friend of Larry W.'s.

If you go to integralnaked.org's what's new section you'll see that there is audio of Ken Wilber in an an interview with Larry Wachowski about The Matrix. (Thanks to Petra)


"In the [...] dialogue, for the first time ever, we are lucky enough to hear Larry publicly comment on this situation. As he explains, the movies were in many ways designed not to give answers, but to introduce questions. What does it mean to be human? What is reality? Who is in control? Does God exist? and so on. If he was to explain what he thought the movies meant, he would be providing people with another concept of reality to either accept or reject—either way, the open space created by the question would vanish."

IntegralNaked.org is an interesting site that delivers "Behind the Scenes with the Most Provocative Thinkers in Today's World".

It's also subscription-based so be prepared to whip out your credit card to hear the interview. There is a first month free deal if you really want to check it out, frankly they lost me at "tres cool!" (plus, isn't there an old joke that says "I don't want to part of a club that has Billy Corgan as a member?" Maybe I'm paraphrasing...)

Anyway, yes, I'm sure I'll be drinking the WB kool-aid and getting this set when it comes out, because they've hooked me with the Keanu commentary and extra behind-the-scenes (I so love to watch him at work). I really wish that Larry and Andrew would have done some commentary, though. I loved hearing from them in Revisited.

gaaahh! gotta have it!! 10 friggin discs, it'll cost a mint, but we do what we must for the k-man.

**waves** hey krix, hope you're having a good day!

mine is kinda sucky, btw, but still , i hope yours is good. you made mine a little better with the 10 disc news...

WOW!!!! Any guess on how much this will be? Probably an arm and a leg. I don't think I will ever leave my house if I get it!!!(would you really need to?)

I'm not sure about the price. I've only seen the information on UK websites so the price is in pounds (about 45).

Holy crap my head just exploded. That is a sweeet set. *starting to save my amazon pennies now*

Oh man, that just made my year. I am literally drooling right now. It's going to be so beautiful. *sigh*

I broke the news to my hubby last night that I would be getting the 10 disc Matrix set. :-) Of course, he wanted to know what was on it that we didn't already have. KEANU doing the commentary of course! (lol). I just can't wait!

so it's confirmed now?

umm..ditto to what what cornflakes squealed..but with an aussie accent..

If you're not willing to give your credit card to an unknown (however cool) site, I'm sure there will be a transcript of Larry's comments up tomorrow on a matrix site near you.

And I remain skeptical about Keanu commentary. *ducks flying objects* I hope I'm wrong. But I'll believe it when I see something in the US from Warner Bros... Has he ever done commentary for a film? Not that this wouldn't be a worthy exception, of course. I'm just not getting my hopes up. :(

*squealing fan girl squeals along with Cornflakes and Kaz*
I know one thing...I can't live without this box set...and I can't wait for the commentary and footage!

Rave Reel- A club-oriented montage of unused and newly edited footage from Reloaded.

Other than this, I can most certainly live without continuing to feed the WB remora.

I am wih Nudel. I will believe it when I hear it -- and not from WB, but from Reeves himself.

But I will still feed the WB machine.

They had me at "Keanu commentary"! :-D
Though I admit I am a little skeptical too. I want this to have a happier ending then the way that the "Inside the Actor's Studio" episode turned out. Don't mean to be a downer. I'm still hopeful just like everyone else! :)

Tyler I'd never get hostile about it, I'm just over the hyping the last nickel out if it, you know? They could have done this with a nice three box set with all the goodies when Revolutions came out on DVD, so we would have had a choice then to buy the single DVD or this. Just my opinion. I'm afraid it's going to be way expensive (if it's 45 pounds as Krix said, then it's about $85.)

*looks over shoulder* Ahem, Wooo Hooo!
LOL @ Lisa's 'They had me at "Keanu commentary"!'
My feelings exactly!

this is quite a lot of info to chew on! it's a must have! and i'm looking forward to all that insider info!!!

I understand completely. I agree. I just can't help myself.

Oh, for the love of Mike! Can we say EGOTISTICAL ASSHATS? Guys, you've made a movie. It's not the new Bible, it's not the Unified Field Theory, it's not even the secret of the Perfect Bra. It's a freakin' ENTERTAINMENT. Man, it's just so ridiculous that these guys think they've created something so earthshatteringly original and deep that it would somehow ruin people's lives for them to explain it. All we need to do is pick up a few wanktastic French thinkin' books and we'd have it laid out in about three hours.

Here's an idea, guys - why don't you record a TECHNICAL commentary? I mean, do you really think there's nothing else in the film worth discussing besides your oh-so-precious Answers To It All? Hell, I'm sure you could go on for several hours discussing HOW the film was made (which, oddly enough, is what most people who listen to commentaries WANT to hear). I know GaetaDork could talk for weeks about it - don't you have anything to say on that score?

You will now be returned to your regularly scheduled commenting. This has been a broadcast from the Institute for Exasperated Filmgoers.

Gee Sparrowhawk, just when I was beginning to wonder where you had gone off to you coming flying in out of nowhere -- and with a vengence I might add :)

BTW, don't tell Monica the Brothers didn't invent the Perfect Bra -- I am convinced its the only thing that kept her from falling into our laps. :)

OMG, out for xmas? i MUST be very very good! i will be, i promise!

Posted by: vika on July 20, 2004 05:39 PM
What's on your mind?.....
(new here? please read this before commenting)
Remember, this is a fan site.
Keanu Reeves is in no way connnected to this website.
Please do not make a comment thinking he will read it.
Comments are for discussion with other fans.
Thank you.