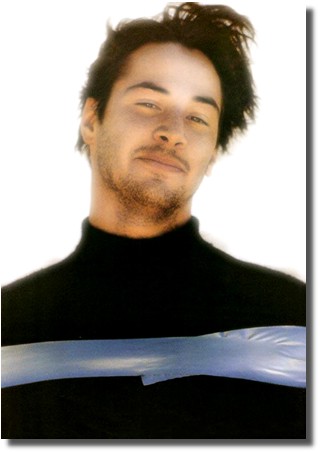 Like the fine wines he loves, Keanu himself just gets better with age.

Just a reminder that in two weeks he'll be leaving his 30's behind and along with the inevitable greetings and posts from the Keanurati on that day you can also leave a greeting on the fan-created virtual birthday card sites for him HERE, created by Lynn and HERE created by Cleo from Brazil. If anyone else has set up a site to welcome Reeves to middle-age, let me know!

Forty is middle-age? Really? No. Really? Ah, damn. I can't be that close to middle-age. I can't be. I'm still, like, a teenager. I own Britney Spears CDs dammit! *whimpers*

"I own Britney Spears CDs dammit!"

While a good argument, that's really not something to be shouting from the rooftops.

*laughs* I will not be shamed by my guilty pleasures. :)

If it makes you feel any better, Zen, I own her first 2 cds. Now everyone can marvel in the fact that I USED to listen to Britney Spears.

Oops, me - middle aged?
Oh well, my star sign is Gemini,
so I should divide it, right?
I'm back to being 20 and a bit, lalalalala!
*bouncing up and down*

Psst, Zenny, I think krix is right...
What do we get if we keep quiet about the fact you published in post #1???

Bwahahahahaha!
Zen! After all the trouble I went through to keep that little *cough* flaw about you unknown to 'the public'!
I guarded that secret with my life! :-D And now you go on and openly spill it ;-)

I am making some special graphics for Mr. Reeves for his birthday... if you like I can send you a couple in the email... but i don't want to clutter you inbox with images you would prefer not to receive... just let me know!!

I don't mind getting them, but you should set up your own blogspot site or even a buzznet photolog, wanda. Both are as easy as email to post pictures to.

yeah, 40 is when "middle-age" begins, but hey, it's been a pretty good year for me, so who the hell cares? here's hoping keanu's 40th year is even better!

Geez, does he look middle aged to you???

Middle age is all in your attitude not your real age. Keanu is one of those lucky people who just looks better and better as he gets older. I hope he has a wonderful birthday surrounded by people he loves and not the freakin' paparazzi.

Zen,
Don't feel bad, I'm 25 and I own three of Britney's cds, LOL!
I should be ashamed, but I'm not. I think she's the biggest hooch around, can't stand her as a person, but I do like her music, it's good dance, riding in the car, get your butt out of bed and get ready music.
Jena

LOL@this thread!...hehe Britney Spears...huh uh...not me...I don't own "none of that stuff!!"
Well ok...I have "Toxic" on some collection I bought while traveling. But hey, I was traveling so give me a break here!!

One Wish I have for you Keanu for your Birthday is for you to meet a SCORPIO woman, if you never have in your life.....now is the time baby!!

a being with
a lovelight so bright
to those around him...
day or night...is always a miracle
we bask and live
in the human
and the divine
oh keanu,
i want to be your
keanutine!
mwa mwa mwa

wanda, chabella: I hope you're also posting these birthday comments over at the birthday sites mentioned, that was the point of the whole entry.

Also, while I'll probably make an exception on the 2nd. Let's not post messages "TO" Keanu in the comments. I realize you're probably just doing it all in fun and know that he certainly doesn't read the site, but some people may not and I don't want them thinking it's OK to post to him, it will clutter up the comments.

I know, I'm just nipping it in the bud so new visitors don't get confused.

Sorry Krix, I just got back on. Sorry, I get so carried away when I think about Keanu! I will check out the other sites. Thanks for being patient with a Keanufreakfreak! :P

That is how I want him. Duct taped and at my mercy!! smiling!!

Posted by: jeannieNC on August 23, 2004 06:22 AM
What's on your mind?.....
(new here? please read this before commenting)
Remember, this is a fan site.
Keanu Reeves is in no way connnected to this website.
Please do not make a comment thinking he will read it.
Comments are for discussion with other fans.
Thank you.