As if we needed more proof that Hollywood is completely out of ideas, last night I saw an ad for Alien vs. Predator .

OK, I know a trend when I see it, and since Keanu doesn't seem to have too much lined up at the moment, I'm thinking maybe I could pitch a few ideas that might get him some work. 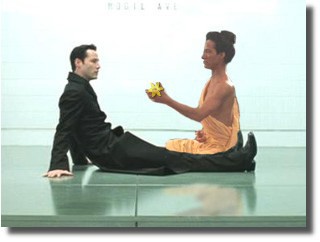 Just coming up with a plotline for this is a bit of zen in itself. One thing for sure is that the final product will inevitably be called "too talky" by a bunch of idiot critics.

Conor makes a big bet against The Sentinels and calls in a favor to his ol' buddy Shane to, um.....drop the ball. Shane refuses and Conor decides to kidnap him and take his place at the 50-yard line. Hilarity ensues.

Tagline: "Hey! Time to Pick on Someone Your Own Size!"

In a climactic scene rivaling Zoolander's "Walk Off", the Teds have a "Battle of the Air Guitars". Fingers fly as the contest goes on much longer than you could possibly imagine, ending only when Tod accidentally runs them both over with his dragster.

This one's still in the concept stage. I'm trying to figure out how to keep them both shirtless for the duration of the film.

ah, krix, talk about inspiring! i really love the Conor vs Shane thing. maybe Shane can get a real contract with (who the hell is the football team in Chicago??) ...and how to keep Johnny and Jack shirtless the entire film? it's set in a nudist colony! Johnny's working undercover and Jack doesn't know it, so when he goes there on vacation, they strike up a conversation based on the fact that everyone thinks they're twins (the haircuts are the only way anyone can tell them apart). hmmm, i think i like where this one's going. ;)

I'm liking these ideas! ;-)
I think Conor vs Shane is my favorite. Conor would of course have to be smoking on the field along with Nigel. I'm sure the 2 of them would manage to catch each other's uniforms on fire or something along that line. Ticky could be on the sidelines taking bets on whose uniform will burn the fastest! But then Bateman would probably run out on the field and take down both of them instantly putting out all fires! The possibilities are endless with this one! :-D
Though I must admit that a shirtless Johnny/Jack movie would be very interesting! 8-). Don't have to worry about the story, who needs a good plot when you've got those two guys! ;)
Thanks for the laugh Krix! :)

Jack Traven joins the FBI and teams up with Johnny, from whom he was separated at birth, to search for the evil baby sellers that separated them. Fortunately for us this leads them to search the many islands of Tahiti, where coincidentally the baby sellers retired after leaving Columbus, Ohio. Clothing is optional so the wardrobe expenses will be minimal...

ROFLMAO!!...yep, it has become increasingly entertaining to have da Bears in a bull market ;-)

You are so clever! I just love your site.

Hilarious and gave me a needed laugh at work (yes I peeked).

Thanks as always, krix!

PS "vibemerchants" sticker now burning up the East Coast. Or at least where I drive.

How about Jjaks vs. Scott?

Dunno about the story yet but Freddie= showgirl and Scotty= hustler. Could be something controversial...anybody ideas?

by the way, [i]excellent[/i] job with the neo vs buddha image--I just noticed the buddha reflection! you so rawk!

...clothing optional, I love it!

*Hee* I think I'm beginning to like the Johnny and Jack one the most, even though it's not even completely thought up yet!

Hmmm what about Chris from Permanent Record and Oh-no-i-can't-believe-I-forgot-the-name-of-the-character-from-river's-edge?

i love that little buddah was on tv last night!

Posted by: wanda on August 11, 2004 06:22 PM
What's on your mind?.....
(new here? please read this before commenting)
Remember, this is a fan site.
Keanu Reeves is in no way connnected to this website.
Please do not make a comment thinking he will read it.
Comments are for discussion with other fans.
Thank you.