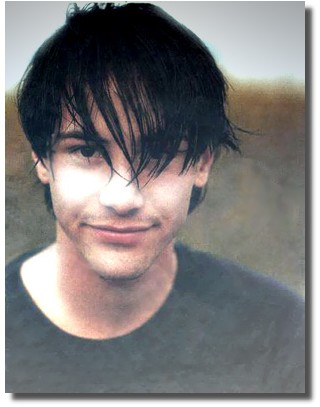 "I just hate seeing pictures of myself where I have this look in my eye where it's like 'Ooh, I'm so sensitive and deep,'" he says, offering advice on Sky Magazine's cover shot. "Do I have some fucking puppy dog look on my face? Oh no, man! I'd rather be cross-eyed and kind of making some stupid face rather than that sombre, actor look. I don't think I'm the most handsome guy in the world, but I know I'm not quite a dog."

Not quite a dog. That's an understatement.

If he is not the most handsome guy in the world, then who is? Yeah, he is definetly not a dog. Although, if he were a dog, he be a golden retriever because he is classicly good looking.

ok, honey, i can get goofy with ya!

my, he does have quite an interesting personality!!!

I always hated Micky and Mini Mouse. But I go nuts for Goofy. Back to the dog ... ah Keanu. A Golden Retriever? Hm, well he is definitively no Boxer ... maybe a Pekinese?

Funny Thread, Krix. Seems like a syrup hangover does good for you ;-)

Have you all read this: 'But the most mystical thing I have is a deodorant crystal.' ? Wow, his armpits must be funky mystical.

and good thing about that deodorant crystal... have you r e a d the ingredients on that other stuff!!!???? i do the deodorant crystal as well, taking a que or two from the mystic_golden_doggy himself...)))))

when did he say that? On this picture he looks like 23...

@Wanda
Of course, I did! I think its the funniest interview Ive ever read from him.

Wow...this interview happened quite some time ago didn’t it?! You would think an interview like this one would have disappeared by now.

It’s really amazing how some people truly look better with age...and some people simply get older but don’t mature...and there are some that look older than they actually are. Keanu definitely looks better with age...and as for his maturity...I don’t think you can speculate on his personality much Wanda as I don’t think you’ve really ever met him.

Shelz, I think we all speculate on his personality. And I agree with Wanda ~ If he wasn't interesting we wouldn't be here. You're kinda speculating about his looks, aren't you? I mean until you see him face to face it's hard to tell if he really looks better with age... I just feel fiesty enough this morning to defend Wanda a little bit. No offense intended.

That interview is a scream...it's almost a shame that he's learned to edit/censor/curb his stream of consciousness responses. All that raw energy, OMG.

The dog thing -- hmmm...at the time of that interview, I'd say Newfoundland puppy. Big, shaggy, affectionate and enthusiastic. But he's grown up to be much more elegant than a Newfoundland -- more like an Afghan or a Greyhound. Calm and sleek. On the surface anyway! I suspect that energy is still lurking just beneath. ;)

well I have certainly never thought of him in terms of being like a dog...hm, but rather some sort of wild big cat...

pleeze shelz do not blush in shame...;-) **lol**
on the contrary keep on repeating this mantra and if it works tell me so and I will try it here in Germany as well..;)))

hmmm, I have actually never thought of him in doggish terms up til now...rather in terms of some sort of big wild elegant cat...

pleeze don´t blush in shame shelz **lol** that is normally my job...
on the contrary keep on repeating that mantra and when it works tell me so and I will try to get him over here to Germany...;)))

????
somehow my computer seems to have a schizophrenic attitude..

so sorry about the double entry...:-/

Wow![or should I say Woof!], I really like what you did to that photo. It makes his sensitivity and deepness look dreamy. Those eyes!

Posted by: sta-cie on July 12, 2004 09:54 PM
What's on your mind?.....
(new here? please read this before commenting)
Remember, this is a fan site.
Keanu Reeves is in no way connnected to this website.
Please do not make a comment thinking he will read it.
Comments are for discussion with other fans.
Thank you.