Reeves takes one for the 'Tine 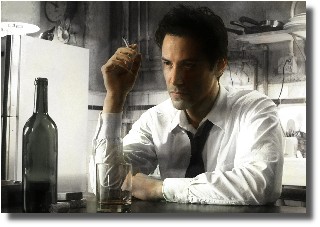 AICN's Quint reports that Keanu will not be cowed by grouchy Hellblazer fanboys and will be making an appearence at Comic-Con to promote Constantine.

UPDATE: Here's the info from the Comic-Con site:


Friday July 23 - 12:30-2:00 Warner Bros.: Batman Begins and Constantine--;Warner Bros. presents looks at two of the most eagerly awaited comic adaptations of all time! First up: Christopher Nolan's Batman Begins explores the origins of the Batman legend and the Dark Knight's emergence as a force for good in Gotham. In the wake of his parents'; murder, disillusioned industrial heir Bruce Wayne (Christian Bale) travels the world seeking the means to fight injustice and turn fear against those who prey on the fearful. He returns to Gotham and unveils his alter-ego: Batman, a masked crusader who uses his strength, intellect and an array of high-tech deceptions to fight the sinister forces that threaten the city. Participating in the panel are actor Cillian Murphy (Dr. Jonathan Crane) and screenwriter David Goyer. They will also sign autographs in the DC Comics booth after the event. Second on today's WB bill is Constantine, based on the DC Comics/VERTIGO Hellblazer graphic novels and written by Kevin Brodbin and Frank Cappello. The supernatural thriller tells the story of John Constantine (Keanu Reeves), a man who has literally been to hell and back. When he teams up with skeptical policewoman [Angela] Dodson (Rachel Weisz) to solve the mysterious suicide of her twin sister, their investigation takes them through the world of demons and angels that exists just beneath the landscape of contemporary Los Angeles. Caught in a catastrophic series of otherworldy events, the two become inextricably involved and seek to find their own peace at whatever cost. Appearing at this event are actors Keanu Reeves and Djimon Hounsou and director Francis Lawrence.

Also, Matrix fans will be interested in this (also on Friday the 23rd):


10:30-11:30 Burlyman Entertainment Speaks!--; Meet Steve Skroce, Geof Darrow, and Spencer Lamm. They will talk about joining forces with the Wachowski Brothers to bring you two new and original comic titles, Doc Frankenstein and Shaolin Cowboy. Steve Skroce, the key storyboard artist for The Matrix trilogy and the writer and artist on Wolverine: Blood Debt, now co-plots and illustrates Doc Frankenstein, with the Wachowski Brothers handling script. Geof Darrow, the conceptual designer for The Matrix trilogy and the artist of Hard Boiled, Big Guy and Rusty the Boy Robot now writes and illustrates the forthcoming title The Shaolin Cowboy, with Ass-ologue by the Wachowski Brothers. Spencer Lamm, a past editor at Marvel comics, and editor of the The Art of The Matrix, The Matrix Comics, and the forthcoming The Art of the Matrix Reloaded and Revolutions, edits these two new Burlyman titles. Larry and Andy Wachowski have worked together for over 30 years. No announcements will be made on possible additional guests, BURLY or otherwise.

...I am gonna LOVE this movie!

This movie is going to RAWK! BTW, did anyone see the brief(and i do mean brief)segment on Keanu on E!? It was about superhero movies. They said the movie will come out as soon as FEB. 2005(which we already knew) but I thought to myself, "AS SOON AS, what do you mean AS SOON AS?!"

So he'll be in San Diego on the 23rd,
with becky in Chicago on the 24th with not a minute to spare in between!
Oh wonders of sonic mass transportation!

Yeah, if it was on the 25th (which I knew was not likely) I was thinking about trying to go. But I have plans on Friday already and can't take the day off anyway.

Sorry about the 25th Krix...but the rest of it sounds perfect!

Oh, and Allison, I haven’t seen that segment on E!, but I’m sure "as soon as" probably means "as soon as possible"? I’m sure the executives can arrange it...as I'm sure they have both the power and willingness to do it ;-)

...and yes, ah the wonders of mass transit! LOL!

Glad to see that'he's showing his face and not taking any crap. You go boy!

can´t wait to see that!
such a pity that we in Germany have to wait quite a time still for that film...
but am looking forward to any piece of news about that film around here! Thanks a lot :))

Posted by: wanda on July 11, 2004 07:51 AM
What's on your mind?.....
(new here? please read this before commenting)
Remember, this is a fan site.
Keanu Reeves is in no way connnected to this website.
Please do not make a comment thinking he will read it.
Comments are for discussion with other fans.
Thank you.