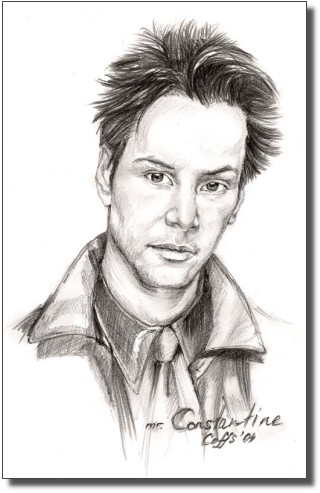 A magnificent drawing of Keanu as John Constantine by Coffs of Keanu Reality, a russian fansite.

By the way, speaking of Constantine, does anyone have a Variety subscription?

I'd like to know if there's anything else about Constantine in the article. Just not $29.95 worth of like-to-know.

And of course I'd really like to hear from someone that saw the footage.

Hmmmm, the Expo was in Amsterdam. Where the hell is Julie!?

There isn't anything else in the article. I read the whole thing when searching Keanu news on Yahoo. I guess they have a back door to Variety, sometimes anyway.

uhh... i saw the footage...love the footage... how are ya krixy...? well, i'm wearin my ivy-leafy-purplerose-lilac top with my jeans and a cute jacket...just running out to grab a bite at kennedys and then to rent some highly recommended videos/dvd's...all relating to or having keanu appearing in them of course! (niece and nephew are coming over later)

article in variety probably reads(that reminds me - make note to self... to get subscriptions to hollywood reporter and variety...) and i'm not quoting them on this!!!!

Constantine excellent classic cinematic fare... premiere date most anxiously awaited...ticket buying public will NOT i repeat NOT be disappointed...keanu shows a whole new light...
Constantine Rocks!!!!!! wait a minute...movie goers will be flocking to see constantine!!!!

Just to clarify, you're talking about his feet or something, right?

Also, I'm doing fabulous. I gotseveral packages of clothes I've ordered recently, one is a slinky black top with ruffle leopard cuffs. I only hope I can play bass in it.

I was thinking of your white top with the fluffy cuffs [when you said 'Hi' to Ke] only the other day.

Oh heck (except stronger), I'm in suit! SOMEBODY SAVE ME!!

*giggle* No, I was just EXTREMELY busy, nearly missed deadlines and stuff. I did lurk everywhere, but I was just too exhausted to comment, LOL! And... I was also involved in a rather embarrassing tap-dancing incident after I tried to express my joy upon receiving a maple-syrup parcel from Zen, but keep that between us, OK? It kind of went like this: Oh! A parcel from Zenny! I am so happy! *tappity-tappity-tap-tap* *CRASH* *cough*
However, I DID manage to scramble together some tid-bits from various Dutch magazines regarding the movie expo! :-D
--------------------------------------
The Amsterdam Gazette, 25 june, 2004 By Julie! Wobblefeet.

It was a night of glamour, a night of magic, a night of...
Foul, depraved, blood-sucking demons from hell, ready to destroy everything in their scorching wake...
Screams of terror were heard, as dismembered bodies were thrown about the place, in a mad frenzy of gruesome violence, as the Dutch hooligans cried in victory upon reaching the quarter-finale of the European soccer-tournament.
Reaping and ravishing souls wherever they went, they turned the whole of Amsterdam into an orange coloured blob of madness. *tsk*

Meanwhile, on the *other* side of Amsterdam, the Cinema Expo 2004 was being held.
A bunch of bearded, (the women, too), intellectual people sat down, and felt very important.
And they should feel that way, because they were treated to a delicate pre-view of the "Constantine" movie, starring the beloved actor Keanu Reeves, and someone named "Shia-La Frouf-Frouf" as his dapper side-kick. Not making ANY mistakes in the public relations-department, the producers of the film had kindly provided the entire audience with buckets of holy water, to soak their feet in during the movie, in order to make the experience "more realistic".
Because, as anyone with any knowledge of the movie knows, this is clearly and obviously the best way to transport oneself to hell. For security reasons (Threaths had come in from a malicious, yet cute group called "The Hellblazer-board" at the last minute) the clip shown during the expo was very brief, in fact, it only lasted 2 minutes. The logo of the movie flashed upon the screen, and that was about it. Audiences RAVED at the glory of the letters, the technical quality of the font, and the cunning use of colours. The tiny scene in which Keanu lighted up a cigarette in a sensual, brooding way afterwards, received high praise as well, and was nominated *best actor in a lighting up a cigarette scene* by the expo-jury, while critics predicted that just this shot alone would ensure eternal bliss for the many Keanu-fans around the world.

Meanwhile, the star himself was hiding behind a potted plant during the entire viewing. Known for his elusiveness, Keanu had opted to go "unrecognised" that evening. However, he was forced to give up his hiding place when a cute long-haired woman accidently bumped into him while she was performing a rather strange tap-dance.
Needless to say, camera's flashed. And perhaps, so did the woman ;-)

Reeves was outraged at this invasion of his privacy, and proceeded to attack the paparazzi, claiming that he had given them PLENTY of photo-ops lately.
And as he grumbled and pulled out his huge "Holy shotgun", many loud cheers were heard, mostly coming from the enthusiastic female bystanders.
Unfortunately, Mr. Reeves was arrested for lewd conduct shortly after this.

The movie will open in 2210, and will hopefully raise enough money to bail him out ;-)

you actually had me going for about the first paragraph or so..hah.

Julie! you are beyond \m/RAWKin\m/, whatever that may be...

I'm sure that's only part of the story Julie! Those newspapers tend to miss a lot of very important information and details. Like one of the things I would be asking is "Why is Shia his side-kick, and why make a movie like this with such obviously controversial content (I mean just look at the reaction from the Hellblazer fans!) I'm sure many fans object to this lack of information...I know I wish it were out there to be read. I think if people had a better understanding of the content of this movie, it might not be so controversial to them. But, alas, they're just going to have to wait until it comes out.

Yay, Julie! for Chief Critic of all KMovies to come!!! Dank u seer!
She's back! Girl, I missed you! *hugs*

...and I do hope K will have to stay in a prison in Holland...
...so we can take turns in baking cakes and smuggling in files...
...and take turns in having conjugal visits...

i hope that my idea is good for you!

Congratulations to the Netherlands for reaching the quarterfinals of Euro 2004.

I so wanted to be one of those officials who'd seen the Constantine trailers. I need a career move. ;)

I forgot to thank Coffs & krix for sharing. :)

Julie! That was friking hilarious girl. I love it when you do that. You had me going for a minute there...lol

My nose! my NOSE! It hurts SO BAD when Red Bull comes spewing out of it.

Julie!=The Funniest Girl in the World

Julie! I hope that daedlines are definitely "dead" and you´ll continue to tapdance together with us. *hugs*

...Vika as far as I'm concerned, I'm gonna "finish off" those "DEAD-lines!" (no pun intended)LOL!

Ooh ooh, can I be funniest GUY, then? :D

Aw, thanx everyone! I *heart* and miss you all, too! Unfortunately, my job doesn't listen to these considerations, *drat*

Mike, Krix already gave you the title: 'Cutest fact-checker on the net', so don't get greedy ;-D
And I'm sorry I hurt your nose Krix! Bwahahhaha, this is the same thing you do to *me* all the time :-D

Oi, and I totally forgot to mention that Coff's drawing is just beautiful :-)

Posted by: shelz on June 27, 2004 06:31 PM
What's on your mind?.....
(new here? please read this before commenting)
Remember, this is a fan site.
Keanu Reeves is in no way connnected to this website.
Please do not make a comment thinking he will read it.
Comments are for discussion with other fans.
Thank you.