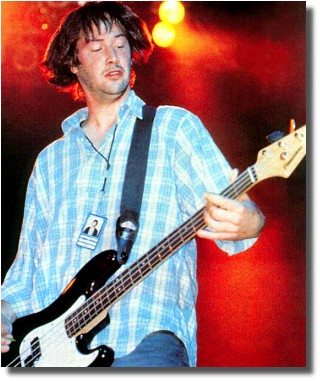 Tonight I'm going to see The Doors (of the 21st Century) in concert at the Sunset Station. The lineup consists of original Doors members Ray Manzarek and Robby Krieger. Ian Astbury, formerly of The Cult I believe, is singing. I had hoped that Stu Copeland would be playing drums, but that's not the case. Ty Dennis is.

Now, along with playing bass in an incarnation of one of the greatest bands in rock history, Angelo plays in an LA rock band called I-94. I-94 was formed by British mates Mark Arnell (lead vocal) and Danny Martin* (drums/ background vocals). These guys? Formerly a band called Bottlefly....who opened for Dogstar the very first time I saw them.

At the Sunset Station.

Sometimes I think the universe just likes to mess with me.

*I had the chance to hang out after a Bottlefly show once and Danny said I was "a funny one then, aren't you?" I think I still have one of his drumsticks somewhere.

What's the deal with you & fate?
Six degrees of Separation?
Anyway, have fun tonight -
and, BTW, is there a rule somewhere that says
a pic must have something to do with a post???

You've definitely got a "fate thing" going for you Krix! Have a great time!

Niobe, the pic is probably Keanu playing in Dogstar, the concert krix saw where Bottlefly opened. It's Synchronicity! Wait a sec, wrong band *hee* it's ... it's ... People Are Strange [though I have no idea why]!

Nope, I just liked the pic.

I probably should have searched for a pic from that show, come to think of it.

Have faith and the universe always will provide :) it used to for me, then it all went to hell.. I'm glad someone else got it LOL!..

Have a rockin' time Krix!! I know you will!!

Hugs and God bless your friend

Off to the Jersey shores for a week.. take care!

krix...it is kismet, fate, karma...you are joined by an invisible thread...erm, wait that was Jane Eyre, right? anyway..I was a HUGE Doors fan back in the day and saw them with Jefferson Airplane at the Roundhouse in London..totally awesome! If this reincarnation is half as good, you're in for a fantastic time! And it has two of the original guys!

off topic: THANKS I don't know what you did, but suddenly I can read the captions for your pictures *jumps up and down* I get all the in-jokes now...*smiles*

Oh, and have some retro fun tonight!

When I saw the picture, I thought its all about the HAIR. ;)

krix, do u have more pics of him playin on that guitar?

well, krix... this pic says to me... time and space are one...and there is relationship (right relationship) between...
( Physics has shown that there are relationships between things like energy and mass, as well as time and space, Einstein's famous equation, E=mc2 (Energy equals mass times the constant of the speed of light, squared) was one of the first to link two such elements. Experiments have been done sending atomic clocks through the atmosphere in different directions, arriving at the same destination at the same moment -- however when the clocks were checked, the times were different, thus showing that speed through space affected time.)

umm....sunset station!!!!... i have story like yours... wanna hear it??? ok great!!!!! well...... my sister and her husband's jazz band used to be called 'no fear' and they played at the madrid room/club inside sunset station all the time...so when dogstar played there 2-3 years ago... 1 month after the roxy show ( i was coming in for thanksgiving weekend anyway)... i HAD to go...by the time i figured out that i was going(i still lived in LA)... tickets were sold out... soooo i called my sis and she arranged passes for my friend Dawn and myself... turns out, one of the guys in charge of entertainment, robert vale, grew up next to us, 2 doors away...funny, i've always thought of keanu as the boy next door... i'm sure your event tonight was/is/will be a great show. i went to the 5:30 performance of Annie... very adorable...
i think i will get tickets also for Heart at HOB coming up soon...

Very deep Wanda...and I LOVE the relationship between the elements ;-)

"I am convinced that He (God) does not play dice."

"Sometimes one pays most for the things one gets for nothing."

"How on earth are you ever going to explain in terms of chemistry and physics so important a biological phenomenon as first love?"

"People like us, who believe in physics, know that the distinction between past, present, and future is only a stubbornly persistent illusion."

"I never think of the future. It comes soon enough."

"My religion consists of a humble admiration of the illimitable superior spirit who reveals himself in the slight details we are able to perceive with our frail and feeble mind."

"If A is a success in life, then A equals x plus y plus z. Work is x; y is play; and z is keeping your mouth shut."

"The only thing that interferes with my learning is my education."

"One had to cram all this stuff into one's mind for the examinations, whether one liked it or not. This coercion had such a deterring effect on me that, after I had passed the final examination, I found the consideration of any scientific problems distasteful to me for an entire year."

"Education is what remains after one has forgotten everything he learned in school."

"Imagination is more important than knowledge."

"The secret to creativity is knowing how to hide your sources."

"We can't solve problems by using the same kind of thinking we used when we created them."

The only real valuable thing is intuition."

The show was great, Ray and Robby still got it. Ian Astbury is a great Morrison facsimile, without crossing the line to impersonator.

Angelo Barbera is yummy. He was steady and solid throughout the whole set (some of the bass parts were maddeningly repetitive and not that challenging) but then he fucking tore it up on a solo at the very end. OMG. I'm dying to see I-94 now.

CF: There are quite a few pictures of him playing the black P-bass, I don't have them at my fingertips, though. I'm sure if you search CK or A-Z dogstar galleries you'll find some.

good morning hunny bunny!!!!! s h e l z!!!!!!,do i actually KNOW what it means... ...!!! l o v e your einstein quotes... i just copy and pasted from this site i happened upon and have been reading it's called yashanet.com this page is at http://www.yashanet.com/studies/revstudy/rev4.htm

it's kind of along the lines of spiritual philosophy so i didn't offend anyone by kung fuing it all over krix's lovely fabulous site...but i think that bill and ted would have a field day!

I'm glad you had a great time Krix...and Wanda, not familiar with that particular link, but Maimonides is very cool...I wish Bill and Ted would have gone back in time for dat guy LOL!

How was the show? I wanted to go but decided on hitting up YBR at the Railhead instead.

OT/ yeah, I just realized I couldn't read the "hover captions" on my own blog (!), so I viewed source on yours and changed alt to title and = wala!! Actually somebody already mentioned this to me weeks ago (Chianti?) but I never followed up on it...

Yeah right, now I have to think of clever picture captions as well as a blog entry.. *wink*

I'm sure I-94 RAWKS, but Keanu is STILL my favorite bass player.

OT/ Nudel, does that mean you can't see ANY alt captions? Is title the thing to be using?

OT/ according to my HTML book that I bought back when I thought I'd hand-code my webpage (which is why it isn't up yet) the "alt" attribute is meant to display when the image does not. Only Explorer for Windows/Netscape 4.x turn the alt attribute into a label or "tooltip".

The "title" attribute makes a label/tooltip in all current browsers, including Safari, used by me and a few other Mac fanatics...

Yeah, I didn't even reaize it until I started using Mozilla/Firefox.

Posted by: krix on June 29, 2004 05:38 PM
What's on your mind?.....
(new here? please read this before commenting)
Remember, this is a fan site.
Keanu Reeves is in no way connnected to this website.
Please do not make a comment thinking he will read it.
Comments are for discussion with other fans.
Thank you.