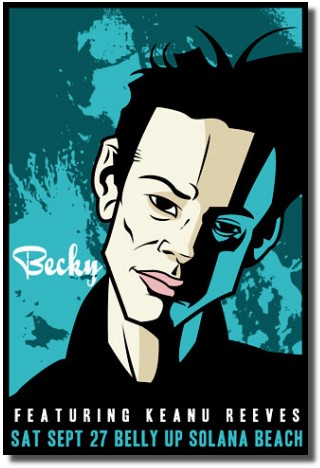 I couldn't help myself.

Spotted over at KeanuA-Z, I had to buy this print of a Scrojo poster for last September's becky show at the Belly Up Tavern. Especially since I was at that one.

Even though in principle, we hate the "featuring keanu reeves" part (what about promoting the whole band?), the image rawks. It looks like it was based on a DeChristo photo.

Looks like Scrojo is the official Belly Up flyer arteest, and I really like his work. I'm in love with the Elliott Smith and Frank Black prints, and the one for the Bacon Brothers is hilarious.

Damn, now I want The Vibemerchants to play there just so we can get a Scrojo poster.

Cute Krix...I think it's all being driven by "Reeves Withdrawal." Better call Dr. Mercer in the morning.

...cool poster...and I would settle just to see the Vibemerchants play.

That's a perfect horror of a frankenreeves.

Since when has K become a member of the Addams family?
Oh no, now I know why it looks familiar!
It reminds me of MTV's Spy Groove!!!

yes, featuring zombie suits to this picture! but, well, why not closer to mideurope? that´ll great present for me for that special day. *dreaming*
and i can imagine poster for Vibermerchant - featuring KRIX! (with pic of your awesome glistening shoes)
LOL

Great buy, krix! especially since you were at the concert. Meanwhile, I'm "watching" the Vanity Fair magazines on eBay for my next impulse buy...maybe.

I agree with vika, looking for Vibemerchants Featuring Krix! hee.

great poster... really wanted to go to that one, but right as i was all set with hotel reservations an'all.. the oct 4 show came up and i decided to go to that one instead since it happened to be also my birthday....)))) that was very nice.

I'd bet that he hates this. You'd think he would have more control.

It's the same with the Chicago concert--Becky featuring Keanu Reeves. And they say the same thing about the Bacon Brothers, who are also at Chicago.

I haven't seen a concert, but from y'all's description I don't see how Becky "features" Keanu in any way...except in our minds.

Nature uses as little as possible of anything.

Posted by: Kepler on June 25, 2004 12:51 AM
What's on your mind?.....
(new here? please read this before commenting)
Remember, this is a fan site.
Keanu Reeves is in no way connnected to this website.
Please do not make a comment thinking he will read it.
Comments are for discussion with other fans.
Thank you.