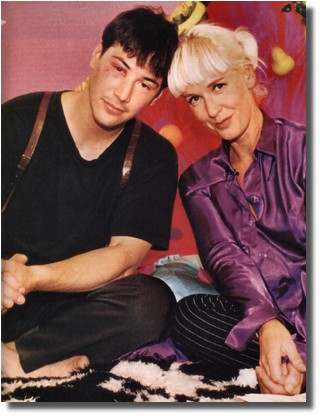 In addition to the FARK discussion that Beeb pointed out, they're also picking apart A Scanner Darkly over at Slashdot*.

Gosh, can we get someone to post something at MetaFilter for a hat trick?

You know, I have no desire to delve into one of these discussions, I've beaten my head against that wall before. I pick my battles and stay tenacious on my own turf. Besides, he doesn't need me or anyone else to champion him to the masses. If Keanu Reeves cared what some people said, he'd have stopped rolling with the punches a long time ago.

It is interesting to read what people outside of the fandom circles are saying about him and his projects, though. Oh sure, there's the usual cheap-shotting haters, but it's not all bad. The Matrix earned him the props from most of the geek community, and he's still revered by many simply for Ted.

And I really think that his work in ASD is going to blow everyone, including us longtime fans, away.

*the key to reading /. is in the use of the threshold feature. The worthwhile discussion rises to the top at level 4 or 5.

And then there's this a$$hat who works on the film crew of A Scanner Darkly.

Sounds like "works", as in: I'm a film student and they let me carry stuff around...

I think ASD is going to be awesome, but then I was completely blown away by Waking Life.

No, he doesn't qualify as "the masses" and there's no discussion.

Hmmmm, but can I spit in Ted's latte anyway?

Also, I think that if Keanu wanted a tongue bath he'd still have quite a few volunteers.

Here is a brilliant remark from Slashdot:

it s your favorite fan who sent to you a magical potion for nervosity ,mr keanu reeves do you want to know it?

Wow, are we going to have to go through this every single time? If it annoys us it must be totally potentially destructive for him. Poor sugar. Good thing he seems so strong and centred.

Thanks for the photo, krix. I had no idea he had been interviewed by the late, lamented and troubled Paula. (Am presuming it wasn't her that gave him the black eye.)

I know there are worse wastes of flesh than Ted Casablanca floating about, but I'm in a bad enough mood today, so I'm targetting him.

If you don't mind my saying so, I think "asshat" is too good for him (forgive my gender assumption). I mean - maybe it's just me - but the opinion of someone who thinks it's super cool to blog predominantly about how much guinness/gin he drank the night before doesn't really excite me creatively. I'm sorry but I don't think he's worth our time.

all i can say is -- keanu as Bob Arctor is going to fucking blow us all away. the casting is perfect, except for maybe Donna (i see her as someone a bit more ... um, young and ripe? maybe... than WR). but keanu as Arctor will be dead on. much much much more excited about this film than Constantine, though i'm sure i'll be there more than a few times for old JC as well.

"ASSWIPE" is my favorite name for utter jerks!!!!

As for TC, I know all you experienced Keanuphiles
read the portion of his column in which he drooled
over K's flawless complexion -- perhaps thwarted
is a better word to apply to Ted (meow!!)

well ,bea herenow , complication your name! you open my eyes ,thank you!

Your posts are always so interesting Christelle.

well... i was finally able to post over at fark... wonder if you can tell which is mine!!??

well... i was finally able to post over at fark... wonder if you can tell which is mine!!??


Posted by: wanda on June 22, 2004 03:55 AM
What's on your mind?.....
(new here? please read this before commenting)
Remember, this is a fan site.
Keanu Reeves is in no way connnected to this website.
Please do not make a comment thinking he will read it.
Comments are for discussion with other fans.
Thank you.