I think this means that The Bar has been lowered 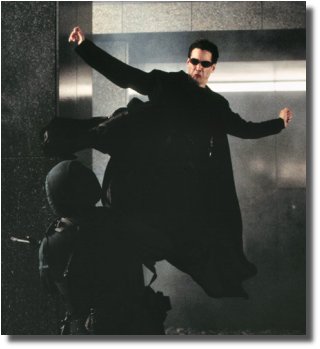 You knew that time has started to heal my heartbreak over you ignoring my pleas to attend the Reloaded/Revolutions premieres with you.

And you knew that now my beloved 24 is done for the season, my Tuesday nights would be free.

OH! And I know you KNEW that if you put a psuedo-Keanu doing a little Neoish jump-kick in the promo of your new show Next Action Star, that I would probably tune in.

Damn you to hell. And take Mark Burnett with you.

I've been trying to limit my reality TV intake. Oh sure, I'll watch Survivor (though not another "All-Star" season, fuck those crybabies) and it's a little known fact that my twisted love for the evil Dr. Will of BB2 is what indirectly introduced me to blogging, but I have my limits. I don't watch Idol Search or Average Bachelor. I avoid anything that insults my intelligence by trying to convince me that a bunch of famewhores are on national TV looking for L-O-V-E (OK, I watched The Littlest Groom, but OMG how could I not?). I used to watch Fear Factor just because Roi and I would call each other on commercial breaks to go "eewwwwwwwww!!!", but really, you can only watch a playmate eat a horse testicle so many times.

I blame that I was already in reality mode due to tuning into The Casino (which as a Las Vegan, I HAVE to watch. Otherwise they will send someone over to break my knees) and last night I found myself watching the special audition episode of Next Action Star. I'm not sure what hooked me, maybe the fact that they invoked Keanu's name more than once. Maybe it was Joel's sweet baritone stroking my psyche, reminding me over and over that one man AND one woman will win this show and go on to STAR in a MAJOR MOTION PICTURE. It's a dream come true, working with Joel. He told me himself.

Anyway, they held auditions all over the country and there were your usual looks into the wannabes hopes and dreams. Apparently all you needed was the ability to kick down a door and do a summersault and you got to be seen. Oh, and the pretend gun gesture (hands together, index fingers pointing at your imaginary foe), you had to know that. There were good tryouts, there were great tryouts, there were laughable tryouts. I'm not invested enough to have caught the names of the judges, but that blonde woman?(and I bet Keanu knows her) Wow, what a bitch. The one that called everyone (starting with the nelly muscle boy) "Sugar" wasn't as bad, but still pretty catty. I hope we're done with them. Tonight they move the wannabes into a big house in Hollywood and start dropping them off rooftops into pools of fire or something. I can't wait.

As far as the contenders go, at this point I'm rooting for that really intense Brando-esque guy from NY, Yale drama grad Reggie ("fan man") and the girl who one of the judges said had a "black widow" quality. I wish I could root for Viviane in her Matrix coat, but I know I'll end up hating her. And her boobs. Also, special mention should go to Matt T. (You know which one I'm talking about) because you KNOW the unenlightened are going to compare him to Keanu.

You definitely have to do something about the power he has over you. I mean really - what has he done for you lately?

Ok, I'll admit to seeing about a whole 3 minutes of this. Yes, the mere mention of "Joel Silver" made me stop flipping channels. Yes, I thought the blonde was really pushing her luck. And Yes, I saw the black widow but I missed Matt. When will the reality tv insanity end? And this after I'll shamefully admit to watching Family Plots last night...label me "hypocrite"...but I really like Shawna.

Aw, I missed it! I really WAS planning to watch it just to see what it was all about [especially since there is nothing else on] but alas I fell asleep before it came on [must have been really tired]. It's on tonight, you say ... I'll have to tune in.

Had the same experience with Fear Factor [it gets old real fast].

Tell it like it is Krixy! WOW...you go girl!

come on now, krix, get a grip woman! no way these keanuwannabes can replace Jack Bauer. reality tv bites!

Ok, this show sucks. The only person I have any interest in is Jared. I want to SMACK Viviana.

Viviana...be sure to pick up a clue on your way out LOL!

Hey, I ALREADY hate Viviana ... she's a drama queen! I so totally called that they would pick her last so she could display all her queenly drama.

The bastard got me too the other night! I did give him up though by the end... DH (dutiful husband) was in the mood to give it up! So F*** Joel Silver, I was going to get some real action!!

Posted by: Jeannie on June 16, 2004 09:58 AM
What's on your mind?.....
(new here? please read this before commenting)
Remember, this is a fan site.
Keanu Reeves is in no way connnected to this website.
Please do not make a comment thinking he will read it.
Comments are for discussion with other fans.
Thank you.