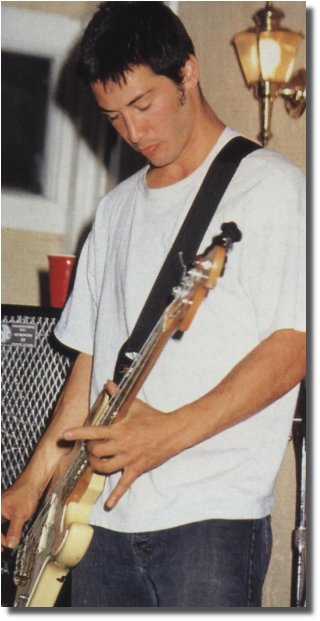 So, how did band practice go?
Got the next gig lined up yet???

Practice went really well, plus we watched a tape of the gig and it wasn't as bad as I feared. The music wasn't bad at all, the main thing was we were all kind of stiff and still and need to loosen up. We don't have another lined up yet, but we should soon.

Well they seem to be off to a good start...it was a good first gig and they are off and running. I'm sure they'll have another gig, it's just a matter of time...well...and practice LOL! Good luck you guys!

Happy to hear that, krix! Yippee!

oh and love that picture too! nice finger action..hee

you're a bunch of stiffs? LOL I'm sure once you all get used to playing in a crowd you'll get over it. Goodluck, krix! :)

Talented isn't he? He can throw the goat AND play bass at the same time! I've often wondered how that hand signal got started. :)

Happy to hear the show was better than you thought it was. You'll loosen up once you have a few shows under your belt. Whatever you do, don't get as loose as pelvis thrusting Juliette Lewis! That just looks plain wierd [although the guys in the crowd might have a different opinion about that].

According to a special I saw VH1 two weeks ago, Ronnie James Dio (Black Sabbath) started that "throwing the goat" hand signal. He said it was something his Grandma used to do around the house. It's an Italian symbol for warding off the evil eye.

love to come to your next show krix... looking forward to it! you know what they say... practice makes perfect! pic above is awesome!

Great to hear about your gig and all going well, Krix. I had fingers crossed for you.

Has anyone a clue re: when the photo above was taken? He looks, like, 11. I know he has never really looked his age, but seriously.

During the Sideburns Era. I have no idea how long that lasted, or when it was, or even if it was only once...but there is a photoshoot with the 'burns also.

It's one for the money (DUH-duh-duh)
Two for the show (Duh=duh-duh)
Three to get ready, now GO CATS GO...

what do you think about narcissism mr keanu reeves ? have you some suggestion about this !

Well...now that I think about it...I don't think it's really a matter of luck for them. I think they're just a tight, together, kind of band...and they will make it in spite of any obstacles. It's because they really want to make it happen...so it will.

Christelle...did you see the entry about Keanu not being narcissistic? He seems to have the whole world at his feet, but he manages to keep his wits about him and maintain his principles. It's one of the things I admire about him.

Bea herenow, I was also thinking about how particularly young he looks in that photo. I'm sure it was taken quite awhile back, but still, he looks like a young teenager!
I need to find his fountain of youth and start drinking up! LOL

*Does the pelvis shake along with Tabitha*

"I need to find his fountain of youth and start drinking up! LOL"

There's a clean response to this, and a dirty one! But I suspect we're all on the same page... Or am I just a gutter-monger? I guess I can live with that =)

This photo was taken in the early '90's when Keanu was jamming with Dogstar at a party at a friends house. MTV showed up and filmed a little bit of Dogstar playing. Later on, MTV ran a segment on Dogstar (using what they had filmed) on the MTV News portion of their show (something about Actors In Bands). So, by my count Keanu's around 26-27 ish here. Approximately. Cute photo nonetheless. :)

*humming along with Julie!...and in perfect harmony*

thank you for our response shelz!

Thanks very much, Judee!

Posted by: bea_herenow on June 16, 2004 03:54 AM
What's on your mind?.....
(new here? please read this before commenting)
Remember, this is a fan site.
Keanu Reeves is in no way connnected to this website.
Please do not make a comment thinking he will read it.
Comments are for discussion with other fans.
Thank you.