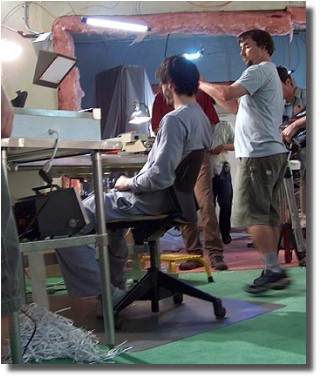 PhilipKDick.com and the Philip K. Dick Trust have a page regarding the film adaptation of A Scanner Darkly.

A Scanner Darkly is one of our father's most personal stories because much of it is based on his own experiences. For this reason, it was especially important to us that it be done with all of the right intentions. His struggle with drug abuse is well documented, and he (and we) have witnessed many casualties. The novel is filled with his humor and his own tragedies. And we believe that Richard's screenplay manages to capture these key elements -- he has even included our father's poignant afterword in his adaptation.

After agreeing that this project was the right way to go, we were delighted to hear that this group of gifted actors would be playing the characters: Keanu Reeves as Arctor, Winona Ryder as Donna, Robert Downey Jr. as Barris, Woody Harrelson as Luckman, and Rory Cochrane as Freck. We think each person brings a unique quality and passion to the project. Laura and I visited the set during filming and had a chance to speak with the actors about some of the more personal aspects of this story. Without exception, every person we spoke to -- actors, producers, and crew was entirely gracious and enthusiastic about the work of Philip K. Dick. They have welcomed our input, and made us feel a part of this project.

Go here to read the whole message from Laura and Isa and for more photos from the set.

I'm so happy that the production has their support and I'm even more excited about Keanu's involvement in this film. It's gonna be huge.

Oh and boo-yah! I so called Downey as Barris! Ooooh, all my casting predictions were on.

-Thanks to Marg for passing this info on.
-Orig. source, MC @ the RDMB

Thanks for posting this here so the world can see it. No surprise to me that you are the casting goddess of this film. I can't wait.

Thanks for the info Krix...it's going to be an interesting film I have no doubt. You called it...it's a great cast, and it's gonna be huge!

Oooh, this is great ...
Keanu = Arctor
Robert = Barris [Excellent choice]
Winona = Donna
Woody = Luckman
Rory = Freck [who the heck is Rory?]
What a cast!
And krix, you SO called it!
I'm knee deep in A Scanner Darkly.
Now I'm gonna see these faces while I'm reading the rest of it.

This is great news! No Keanu bashing for a change
and he said years and years ago that he appreciated PKD's work - sounds good!

it looks like they are doing totally serious work... i'm going with krix's prediction that it's going to be huge!!!!

cool side, cool idea to inform the fans while shooting and Robert Downey jr. looks excellent!

I read that over and over trying to get why those words were together. I could only think maybe there was a missing "s."

I heart the Dick Trust.

Actually, I heart someone else as well...but am feeling entirely too sheepish about it.

You should become a casting agent or something Krix, seems to me you have talent in that area, and all the actors there are darn good.. if i do say so myself.

thanks for such a super update, krix!

surely one of the finest casts ever assembled... rdj...last saw him in Ian Mckellens brilliant but totally warped Richard III. Had to write a paper on it and I got an A!!! i'll try to find it in my other computer...i did mention his portrayal as part of it! my friend Kate has a thing about rdj... and winona!!!! i thought girl interrupted was very interesting. she had a tough go with that mixing of the medication thing... i think i understand that one! but healing comes in many forms and all that experience just adds to your tool box, i think! i don't know much about woody h... but i'm getting the gist of a V E R Y intense major film impact being made...))) very serious indeed! oh, and a hem... keanu!! they must have wanted an ace on this one!! he will be excellent... i think?... i seek?... i know!!!!!!!!i real some exerpts of the book online... need to read more.. i will do that.

OMG guys guess what no lie, the librarian of the libary I go to used to work with Keanu at a pasta store in Toronto... and she's SERIOUS. She's not the kind that would lie either. I was telling her I was watching Much Ado About Nothing, and that Keanu was in it, and she told me that. I'm so surprised!
Sorry, that was off the subject but it's just amazing

I'm so sorry about your knee Janice...OUCH! *hugz*

she said it all casual, like it was everyday that people get to make pasta with him. Sigh

wow, this looks really intriguing, thanks for the heads up and inside peeps!

i'm about 2/3 through Scanner, and Arctor and Luckman are having this bizarre discussion about a microdots factory, and i'm seeing keanu and Woody sitting stoned on the couch engaging in this exchange, and it just makes me shiver.... and yesyesyes, Downey IS Barris! whheeee!

You said it lori! I can just imagine those two stoned outta their minds. And RDJ is such an excellent choice for Barris. I just wish it was coming out sooner. I CAN'T WAIT THAT LONG!!!! I guess Constantine will have to tide us over until then. But man, that's not until February!

Posted by: sta-cie on June 16, 2004 12:08 AM
What's on your mind?.....
(new here? please read this before commenting)
Remember, this is a fan site.
Keanu Reeves is in no way connnected to this website.
Please do not make a comment thinking he will read it.
Comments are for discussion with other fans.
Thank you.