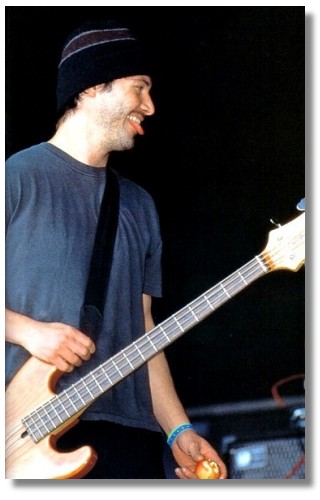 Cute bit of Keanu content from a Scotland on Sunday article about the T in the Park music festival in Glasgow:

The buzz backstage is electric, she says. "It’s like a rock star social club, everyone swapping touring stories and catching up with people they haven’t seen for ages. It’s a constant stream of limos and tour buses."

But not everyone arrives in rock star transport. "Keanu Reeves turned up a couple of years ago on the shuttle bus with all the festival goers. I had this call from the gate saying, ‘There’s a guy here says he’s one of the artists’. We went down, quite curious, and there was Keanu Reeves and his band, Dogstar." Apparently no one on the bus had recognised him - or they hadn’t let on. "He was quite content sitting on the bus, reading his paper and soaking up the atmosphere."

omg... never fading omg factor comes into play...
i think i'm speechless... i'll have to let my pictures say all those thousands of words...o dear, i won't be able to put those up till much later tonight! maybe in the wee hours...hhmmmm then i can suggest a few dates if that's what you want...i'm soaking up the datemposphere...

Reminds me of this quote in an interview:

"it seems like he had the whole world inside of him"

Mr. Accidental Superstar himself. He walks [buses it] among the common people! :)

Mr. Accidental Superstar among the common people...and oh what ruckus he makes ;-)

Or not, apparently, nobody noticed or at least nobody appeared to notice.

noticed!!??? i think keanu is such a fine cameleon and has such a naturally low key demeanor that if he walked up next to you on a bridge and just started chatting it might take you a few sentences to "get" that it is him...i was thinking calander dates...

or if he sat in the same restaurant as you...somewhere...where o where!? maybe you were expecting to see him somewhere else, but not in that place...

thats true, wanda. I am sure if I would meet this guy on the road or somewhere else, I wouldnt recognize him.

Hey I went to see Dogstar at T in the Park that year - how much am I wishing I took the bus now !!!

(mind you - what would i have done anyway? I mean, it would be pretty horrible harrassing him on a bus when he was just trying to be a normal chilled-out guy)

We had dinner in an Indian restaurant in Glasgow last month which the band ate in when they were here - there's still a big photo of Ke with the manager above the door - the manager has a HUGE grin like "look who's eating in my restaurant !!" and Keanu looks pretty happy too :)

oh creezy!!... i didn't mean it that way!! i just meant that keanu is very adept...and in control.

Posted by: wanda on June 14, 2004 12:10 PM
What's on your mind?.....
(new here? please read this before commenting)
Remember, this is a fan site.
Keanu Reeves is in no way connnected to this website.
Please do not make a comment thinking he will read it.
Comments are for discussion with other fans.
Thank you.