OK, so I didn't want to mention anything for fear of causing a panic, but I'm sure some of you noticed that we haven't heard from Wee Neo since his time in Amsterdam. It seems that he took a liking to some of the wonders that Julie!'s lovely culture had to offer and ended up trying to take a little bit home with him.

In a nutshell, Wee Neo spent two months in a Turkish prison for smuggling hash.

I don't know where I went wrong. He used to be such a good boy.

Luckily, I know some people who ...ahem....know a guy who can make things happen and Wee Neo was broken out released after some diplomatic negotiations...

Part of his release involved being smuggled out in a purse.. 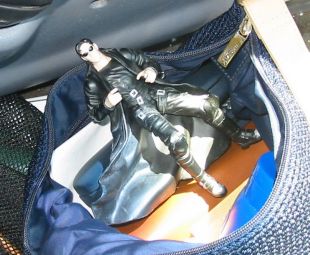 And there may have been a bit of a car chase... 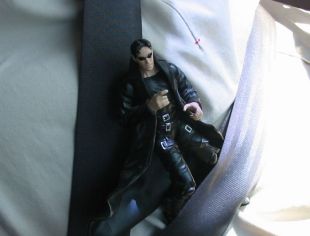 ...but his accomplices kept him buckled in and secure. 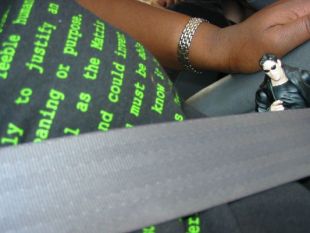 Every aspect of the mission was considered carefully, except the fact that there was only one CD to listen to for the whole trip. Neo playing air-drums the whole time didn't help. 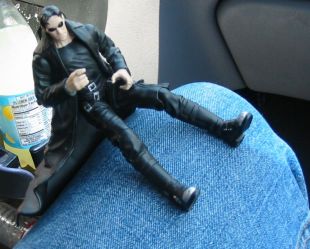 Neo really wanted to drive but there was a visibilty problem. 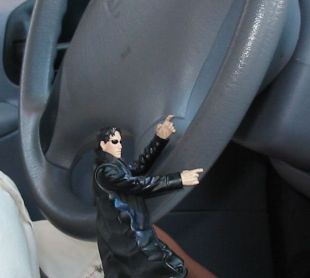 Finally, after some particularly fancy evasive maneuvers, some forged passports and a bribe to the crew of a import freighter headed for the Bay Area... 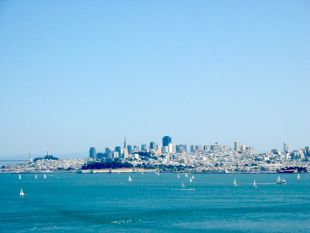 Stay tuned to find out who saved Wee Neo and what they did when they hit the shore...

Of course, I realize it's Wee space Neo, but I had to go for the base humor didn't I? Can't wait for the next installment.

Have desperately been waiting for his adventures, part 2,
but didn't want to ask because I had the feeling there was something off...
I'm glad he finally surfaced in SF.

Chianti - you kill me! LOL

Poor Wee Neo! Sounds like he had quite the ordeal. Glad to see that he got through it ok! Hopefully his next adventure won't be so "confining"!

And Krix, regarding this entry,
"I don't know where I went wrong. He used to be such a good boy."
Don't be too hard on yourself, I'm sure you're doing a wonderful job with him! Boys just like to test the boundries and sometimes they end up paying the price! I'm sure he has learned his lesson! ;-)

Yeah Krix..."Boys will be boys"

aahhh Wee Baby, you're baaaack!!! we missed ya! Can't wait to hear more... although I hope...his time in prison...you know...he being so gorgeous and all...ack!

He'll get himself a good French lawyer, Shelz :-)

now you can see, what the red pills or other drogs can do!
I hope, he is clear for next (trip) tour. of course we can accept some (wee) time for rest.

Well, stand up for Wee Neo

2. Two month turkish prison for smuggling substances? They took a german guy into turkish prison for 2 month because he took a simple shell on the airplane Guess, Turkey is just pretty liberal when it comes up to prison invitations So you see: there are really worse things Wee Neo could do ;-)

Nudel,Creezy...forget "toss the salad"...that CD is a prison sentance all by itself!!!

Did someone mention Neo needing a good French lawyer?
Since he's already out of prison I'm thinking emphasis on the "French"? *ahem*

Oi, it was a 'weener' reference! I'm sorry Chianti, I'm not an American so I didn't get that one at first! :-) Sometimes 'slang' takes a little more time to sink in with me ;-D
I thought it was so funny because I had a mental image of wee-Neo performing in an adult movie, proudly, ehm...
You know. Being wee and all. *giggle* Nevermind. :-)

He was in a Turkish prison?? Oh boy. He'll never be the same again. Hm.

Posted by: wanda on May 11, 2004 09:23 PM
What's on your mind?.....
(new here? please read this before commenting)
Remember, this is a fan site.
Keanu Reeves is in no way connnected to this website.
Please do not make a comment thinking he will read it.
Comments are for discussion with other fans.
Thank you.