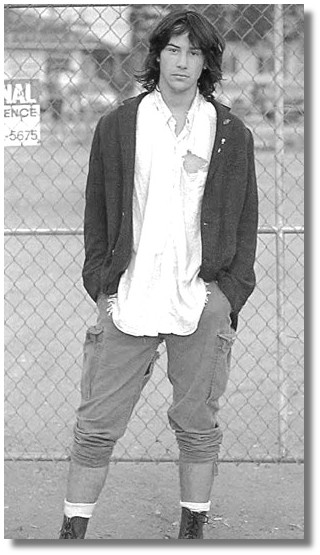 That shirt looks like he had a run-in with Justin Timberlake.

I luvs me young Ke!

Thanks for making my Friday night, Krix!

OH!! Look at the baby! Oh, look at the darling litte sweet baby baby baby just a little tiny precious babybabybabybaby..... oh my GOD he just makes me talk nonsense. What a little sweetmeat he was.... oh, thank all the stars he isn't still this young, I'd be mortified at my thoughts.

Sweetness! Although I am more a fan of thirty-something Keanu. It's hard for me to drool over a really young guy, even if I know he's close to age now. How twisted is that?

thank god for this pic on friday! f IS for foxy

OMG. Another 4-letter f-word comes to mind...and it's just as perfectly descriptive. Does he ever age?

I am SERIOUSLY drooling over this picture right now...

are ya trying to give me a heart attack here? lol

I love the old publicity pics. There's another one in the same set, and he's in front of the old Volvo with an Ontario License plate!

His legs are so sturdy looking in this pic.!!!

Although K looks good all the time, I think he gets better with age

I think so too Allison, though I think Ke has allways been beautiful.

I love all the pictures from this session. And I do get a little thrill out of the Ontario license plate one. *hee*

The way he hangs on to the old stuff he loves I wonder if he has that old green Volvo somewhere -maybe a nice lawn ornament in his mom's back yard.

where are these pictures? I neeeeed to see them, lol. Actually, i think he's pretty cute when he's younger :)

Keanuweb.com has images sorted by photographer's portfolio. You can find Karen Hardy Bystedt's photos in the images section. I believe you have to be a registered member to see past the thumbnails, but it's not hard to register.

I dunno...every time I see pictures of Keanu when he was just a sweet young thing, all I can think is "Come here, little boy..." *lecherous leering* Does that make me an evil person? Or is it just a healthy indicator that the old hormones are still percolating in this middle-aged bod??

JeezLouise, you should go to the Poetry link and see my poem "Here's to You, Mrs. Robinson." It's got another pic from this same batch. It's short, but it's funny.

Or you could just go here:

HEE! Bethanie is right on the mark there...cookies and booze, indeed. Beats tea and sympathy. ;)

Aww, come on, ladies! He wasn't that young! Karen Hardy Bystedt says she photographed him in 1987. When I was 23, I thought I was pretty damn mature.

i was out playing lacrosse when the someone was telling me about not getting tunnel vision, or it'll ruin the game but is it possible to get keanu vision? especially after that pic? rather distracting...

but i guess that's a stupid question to ask...

there's just something about the B&W's (including the photo of Keanu in front of the volvo) ...
most scintillating? (artisticaly and aesthetically)!
*):

ya definetely good shots of him- doesn't even need color

Posted by: Cornflakes on April 25, 2004 08:08 PM
What's on your mind?.....
(new here? please read this before commenting)
Remember, this is a fan site.
Keanu Reeves is in no way connnected to this website.
Please do not make a comment thinking he will read it.
Comments are for discussion with other fans.
Thank you.