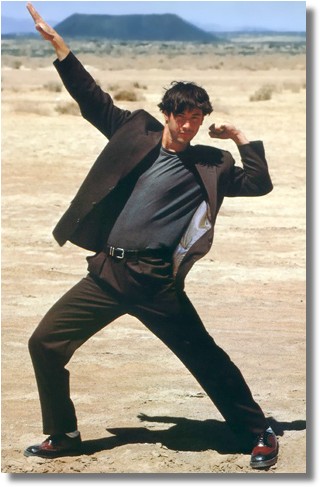 Have a great weekend everyone.

Another one of those pics that makes me wonder...
What did the photographer's object want to imply with this pose?
Stretching himself because he's bored?
Botched yoga routine?
???
A most excellent weekend to all of you!

That's a good question Niobe...I was wondering that myself. It certainly looks like "onward ho," but onward to what?

I wonder if keanu felt silly doing this pose. I would have, even though he's hella sexy ne day.
hehe it's a funny picture...

Maybe he was just imitating a homeplate umpire (baseball)?? Strike thrreeeee... LOL Either that or he wants to punch the daylights out of the person who made him wear those shoes! :P

Looks more like a "Mr. Olympia" bodybuilder kind of pose to me. Somehow doubt he felt silly, though. Doesn't seem to have a self-conscious bone in his body! Lucky for us... ;)

Looks like up up and away! Kind of a super hero pose ish kind of thing.
You understand I hope....lol

Y'all, I doubt this was the photographer's doing at all. I think our boy is an ebullient goofball who was doing a series of silly, bizarre things while the photog said, "Oh, gorgeous, darling, oh, yes, like that, oh, give me more! More! Yes! Oh, beautiful! You animal! You wild thing!"

I just love seeing his body frozen in any kind of stretching or movement, no matter how goofball...*sigh* and the shoes are fun!

Yep, onward to the weekend...

What a crazy pose! LOL I wonder if his shoes are comfy. =p

It looks as though he's trying to perform in Saturday Night Fever while throwing a "girlie pitch" with his left hand.

"girlie pitch" now that I haven't heard in a while...

tehe i just had the strangest urge to poke mr Reeves in the belly in that picture... mmm that would be great. Wouldn't it be great to know him? sigh... I can't figure out whether i like his personality more or his bod more. I like his personality. Aaaah, Keanu's so fun. I have the worst craving for a keanumovie-athon right now but i must resist. I *HAVE* to finish my work. But how can i when something as awesome as keanu exists?

oh and cornflakes ... gee thanks...now all I wanna do is poke him in the belly...it's drivin' me nuts!

Isn't it an addictive, distracting idea? I wonder which pictures of him are pokable.
It's sort of weird but I think that if there ever was a poke keanu party, we would all have a lot of fun! sigh.... think of all the possibilities if u knew keanu... hours and hours of poking fun...
and a lot of ANOTHER sort of fun... ^-^ ahem.

Please note that the term "girlie pitch" is more descriptive than anything. I know plenty of women who could chuck a softball (or regular baseball) clear through my torso.

Just covering my ass in case one of those "extreme" feminists (the ones who spit on you for opening the door for them) comes through here and decides to beat on me. :P

Yeah, Cornflakes, we would all have fun at a poking k party. Can u imagine all of us at a sleep over w/k? Pillow fights, keanu movie fest all night(and other things going on all night)

What a pleasant *perfectly healthy* imagination powered dream...
And he could explain to all of us about his movies and things about making them and his ideas and stuff... and ofcourse, we would goof around and have a fun time.
Think- MEGA LONG INTERACTIVE INTERVIEW/ HANGING OUT W. THE MOST BEAUTIFUL/INTERESTING/FUN person.
I could go on, but I'll just stop for now. Lol.
But the sleepover idea with Ke would definetely be even more fun to have... phew, lot's of run-on sentences

can't stop myself from coming back to this one pic of him, for some reason, and just for a quick glance. He seems to shout "LOOK AT ME CORNFLAKES! LOOK AT ME!"

And for a quick poke.

okay okay sorry for so many comments, but I finally figured out an explanation for why he's standing like that. Here's what probably happened:
Keanu was originally standing like an X with both his arms out, for a pose that the photographer made him do, as a strange random person popped out of no where, poked his belly, and ran off laughing hysterically. This continued a few times while they tried to take the picture again, until Keanu finally (jokingly) threw a punch at the weirdo. However, she was gone before the he actually threw it, and all that remains as evidence is this photo, which turned out alright. Ke was left to wonder about the incident for the remaininder of the day...
okay yea, I know, I've looked at this pic too long. leaving... now...sorta...

"And here we see Keanu trying to demonstrate a 'jumping jack'. Unfortunately, as you will note, half of his body has fallen asleep."

LOL@Mikey.. happy monday everyone, hope you all had a wonderful weekend.. have a great rockin' time at the gig tonight Krix... You most certainly deserve it.. Can't wait to hear your report, review, and hopefully some pics!!.. hugs and God bless your friend

Mikey2, you are toooo funny!

I think he is shotputting in the desert in a cool suit and fun shoes. I agree with the ebuillent goofball theory. Oh yeah.

Let's face it, we think anything he does is charming and I think we are right!

Janice, I'm not going to the show tonight. I don't know where you got that impression.

I heard this thing screaming for you Cornflakes, all the way over here!!

LOL! And now I'm back again, Shelz... I'm glad I'm not the only one who heard it!!
Sigh maybe it's good I don't know Ke or I'd probably keep dropping by his house to say hello all the time just for a "quick glance".
And a quick poke.
I'd eventually drive him nutz and he'd never talk to me again.
haha, nah i'm just kidding

Posted by: Cornflakes on April 26, 2004 06:38 PM
What's on your mind?.....
(new here? please read this before commenting)
Remember, this is a fan site.
Keanu Reeves is in no way connnected to this website.
Please do not make a comment thinking he will read it.
Comments are for discussion with other fans.
Thank you.