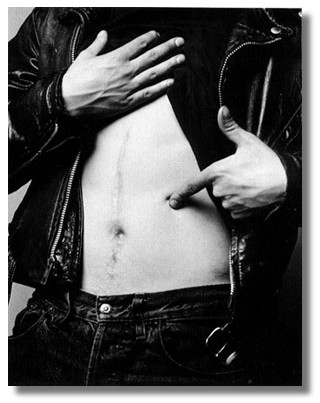 WOWSERS! What a great thing to see just before bed! Now I can dream sweet dreams of a certain belly scar.

Because works for me.

Ouch! Musta hurt to get that thing! I saw a picture of it once somewhere else.

Can I kiss the boo boo?

sexxxy (no surprise there!) what is that little dimple is that he's pointing to? i don't remember seeing that in more recent pics of him.

Have a wonderful birthday Krix. Here's to ya!

F*ckin' put that in the wrong place. Oh well. The sentiment is still the same.

And I got it just the same, Thank you :)

i think the little dimple is just from his finger.

No, that dimple is a scar of some sort, you can see it in Sweet November in that first shirtless scene. At least, I think I remember seeing it then.

I think the dimple was also in The Matrix during the "bug" scene.

lol... somebody has been watching sweet november very closely! lol but what am i talking about, weren't we all? :)

Posted by: Cornflakes on April 16, 2004 08:08 PM
What's on your mind?.....
(new here? please read this before commenting)
Remember, this is a fan site.
Keanu Reeves is in no way connnected to this website.
Please do not make a comment thinking he will read it.
Comments are for discussion with other fans.
Thank you.