trilogy babble and the passion of neo 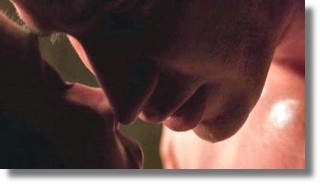 On Saturday afternoon, I finally got around to watching the Matrix Trilogy from start to finish. I love the way it all fits together and anyone that continues to bitch about these movies can freaking bite me.

Seriously, though. In watching the three together I really saw things brought full circle. And also with the help of the subtitles, I caught a lot of important dialog that had gotten by me before. One thing that stood out was Morpheus' speech in the temple.


"Tonight let us send a message to that army. Tonight let us shake this cave! Tonight let us tremble these halls of earth, steel, and stone! Let us be heard from red core to black sky. Tonight, let us make them remember. This is Zion! And we are not afraid!"

The citizens of Zion dance to shake the earth, to show the machines that humanity is not afraid. It wasn't a "cave rave", it had purpose and especially cut with Trinity and Neo's lovemaking it makes so much sense. Again, anyone who bitches about that scene not making sense or going on too long can bite me.

Anyway, I could probably go on and on, but not today.

For more deep mind feeding matrixy goodness, Stephen Faller, author of Beyond the Matrix, has written a 5 part article , The Passion of the Neo.

The first 4 parts can be found at his website

UPDATE: Part 5 is now up at The Last Free City, I imagine it will be also at Mr. Faller's website shortly.

-via The Last Free City

I just wanted to say hello. I been a little busy and haven't really been leaving comments and I feel bad about that. I love your posts but just haven't had time to catch up with everyone and stuff. :)

I feel the exact same way about that rave scene krix! Everytime I watch it with someone else they always say that it was just an excuse to have some sex in the movie...but really.. it has a purpose...just like everything else in the movie!

Mmmm the sex scene was good :) Screw everyone else that says "ew that was gross" or "It was way too long"... or stuff like that.

Krix, I agree with you all the way. The cave scene, and Neo and Trinity's scene were intwined so well into the story. I really think the people who say they dont understand the Matrix, or did'nt enjoy it, are to lazy. They are used to movies being made so that you dont have to think. I loved this story because it makes you think, and it is one of the most visual films I have ever seen. It trully is a work of art. And it has so much to offer everyone, if they would only open there mind's and hearts. I am so glad I can experance it over and over again, as I seem to pick up more and more each time I watch them.....

I remember going to see Reloaded after I had heard Laurence Fishburne talk about the cave scene during an interview. Although I had planned to see the film anyway, his remarks made me want to see it even more. After I saw it, I thought it was better than he had described. Myself, I had an unusually strong emotional reaction to the whole scene. I think the people of Zion were celebrating in advance their freedom from oppression...even though it did seem to have the flavor of a Rave. I am very fond of the music during this scene, it was the main reason I bought the soundtrack.

Stephen Fuller...what a gem you are lad. Very interesting analogies you draw from these films. The whole "dialectic tension" idea seems fitting. I must remember to buy your book for my desktop so I can eventually get it read.

I fully agree, Krixy, and eloquences is not required. If people can't see the obvious truth, that's their problem.

One thing that did sort of strike me today (no, I still haven't gotten the trilogy, I was just thinking) was one other subtlety I had missed earlier...

Zion, most notably in the caves during their celebration, is yellow-tinged...

The Machine world, where Neo and Trinity go at the end of Revolutions to save humanity, is tinted blue...

The human world and the machine world...and in the middle they meet in the Matrix...which, especially during the second and third movies, is green-hued...

Think about it (unless this was obvious to everyone else and I'm the last person on Earth to notice...AGAIN!).

So glad you got to see all three. I love them so much that I tend to be irrational in trying to explain. But I always thought the Zion scene/Trin&Neo love scene were fantastically done. And I just cry now when I see Thomas A. Anderson at the beginning of M1. The poignancy when you watch all three in a row...

Truly a great work of art, and my favorite films ever.

Okay, Mikey, spill. All I can think of are: M&Ms or the multi-hued security alerts. All this rain is messing with my synapses.

On a somewhat unrelated note: at Auntie Anne's today, waiting in line for my whole wheat pretzel, I hear this guy calling for Trinity. Seems his 3-year-old daughter wandered off toward the carousel. These movies have really permeated our society. In a good way.

Well, I got that part, but I thought maybe it was more symbolic than that. Guess I was making it harder than it was.

That in itself is fairly damned symbolic, don't you think? It was a subtle reference to the union of the two "sides" in the battle, among other things.

Yes, that is symbolic in and of itself. I wanted to make a comment on how, in any battle, there is almost always a point where the division between sides is blurry, where there is more common ground than not, but I don't know if I phrased it well enough.

I hear ya. It's been pretty biblical over here too. :/ *SQUELCH* *SQUELCH*

I loved the first movie... they should have left it alone. The last one just blew goats... the whole "Neo-Christ" thing was way too over the top.

Well you're welcome to your opinion...even if it's wrong. :D *chuckle*

I am sure everyone else kows, but could you post
Steven Faller's web address??

If you click his name in the entry, it will take you there Judy.

*counting down the hours*

Well I noticed the colors Mikey...but I did not see the symbolism. I need to watch them again in sequence, I haven't had time to do that yet but plan to (will buy them too). Great films, I've seen each many times and I rarely do this...along with all the Matrix paraphernalia I also own :-)

Posted by: shelz on April 14, 2004 06:31 AM
What's on your mind?.....
(new here? please read this before commenting)
Remember, this is a fan site.
Keanu Reeves is in no way connnected to this website.
Please do not make a comment thinking he will read it.
Comments are for discussion with other fans.
Thank you.