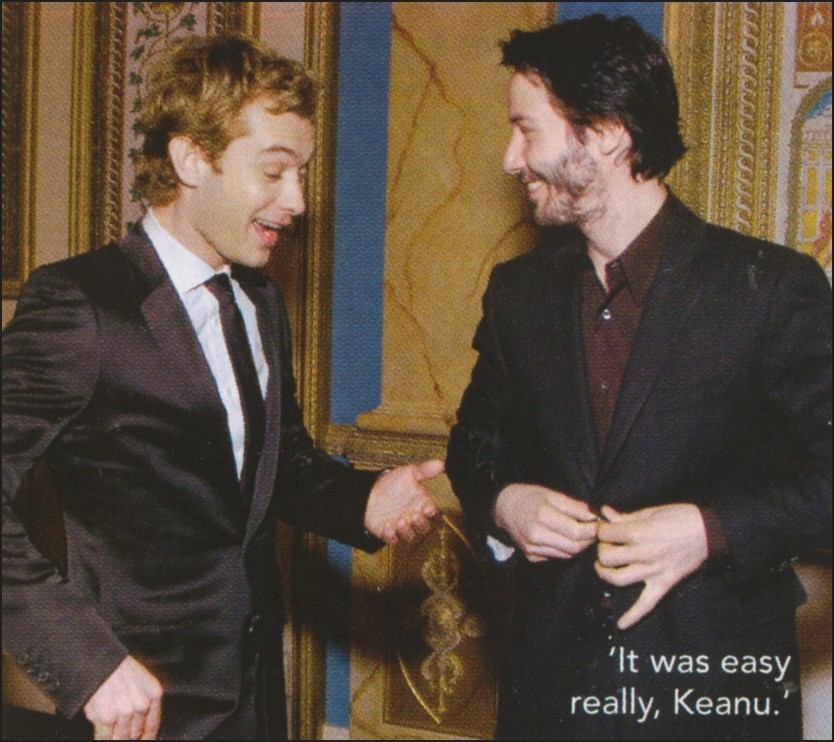 Kaz sent out this scan of Jude Law and Keanu at ShoWest from Oz mag New Idea.

I have no idea what the caption means.

Oh, who cares about stupid captions when you have hot and hotter in the same picture. *yum*

Nettie! LOL Why is Jude pukey? I have to admit, I know nothing about him. He just looks great.

And I ain't watching 'Alfie' either. That's just blasphemy.

I agree with you there, Nettie - no one can replace Michael Caine. When I read about that I gasped and wondered why oh why can't they come up with original ideas instead of attempting unnecessary remakes? I've always luvved him even in the crappy movies. (Poseidon 2 for example. Yikes. Must be something about ocean liners and part 2s) :)

But back to the photo, I have nothing against Jude Law. Maybe they are laughing about how freaky Sadie Frost looked in Dracula?

LOL. I agree with Hanapana, it looks just like Jimmy Fallon(who for some reason i used to think was so adorable). This picture makes me laugh because my sister and i argue over who is cuter, jude law or Keanu.(i already know how the rest of u feel,keanu by a landslide)

"It was easy being a less well known/liked celebrity than you, really Keanu"

...and I agree K, is utter blasphemy, I thought the same thing when I heard.

Just to prove how much hotter Keanu is than Jude Law. A r-e-a-l MAN. :) Tks krix, tks kaz

Jude's a Francisco D'Anconia, but Keanu's my John Galt.

Neo may exhibit extreme individualism and distrust of government, but Keanu himself does not seem to be a likely proponent of objectivism.

No, Keanu would not be an objectivist. I just mean in terms of my levels of hero. Jude's a cutie. He's neat. But Keanu... well... he's the hero of my story.

Maybe Keanu asked him about talking to James Lipton of The Actor's Studio since Keanu will be taping that in May. LOL.

Posted by: Joanna on April 7, 2004 02:08 PM
What's on your mind?.....
(new here? please read this before commenting)
Remember, this is a fan site.
Keanu Reeves is in no way connnected to this website.
Please do not make a comment thinking he will read it.
Comments are for discussion with other fans.
Thank you.