kick out the jams 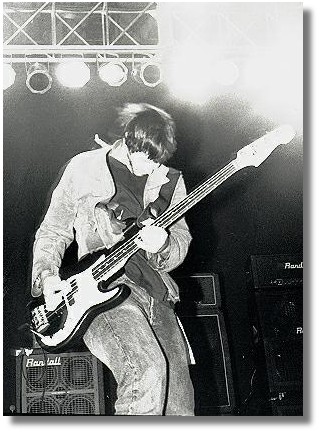 Kick out the jams motherfuckers !
Yeah! I, I, I, I, I'm gonna
I'm gonna kick 'em out ! Yeah !
Well I feel pretty good
And I guess that I could get crazy now baby
Cause we all got in tune
And when the dressing room got hazy now baby

I know how you want it child
Hot, quick and tight
The girls can't stand it
When you're doin' it right
Let me up on the stand
And let me kick out the jam
Yes, kick out the jams
I want to kick'em out !

You gotta have it baby
You can't do without
When you get that feeling
You gotta sock'em out
Put that mike in my hand
And let me kick out the jam
Yes ! Kick out the jams
I want to kick'em out

The wigglin guitars, girl
The crash of the drums
Make you wanna keep-a-rockin'
Till the morning comes

"Let me be who I am", something a certain Bastard Prince utters in a very successful play that was made into a movie...
Is this the "Guess the KLink" game we're playing now?
What do I get?

Well, you pegged the line that made me add it to the mix.

And when he plays he certainly kicks out the jams.

Cool! Thanks krix. I'm liking this a lot!

Hey Krix...where did you find these guys? Have you heard them play before or just that web site?

If we don't hear from Krix today - Keanu was in Vegas yesterday. He may be rogering her roundly even as we speak.

Ha! I wish.
Last night was spent waiting for a drummer that never showed up.

No, she showed up, but couldn't actually play. The guy last night flat out flaked, no call, nada. We were really looking forward to trying him out, too. His uncle (I guess I can say this now without fear of jinxing the whole thing) was a member of MC5.

So far drummer-quest sucks. All we're asking is that you show up and can play and so far we're 0 for 2.

That does suck, Krix. The girl would have been cool. What a ditz.

Oh, also Thanks Capricorn for the link. I'm going to check it out this weekend from my machine with a sound card.

krixy, you need to spend some time in the UK... *wink*

Roger -ing verb: To roger means to have your wicked way with a lady. The Oxford English Dictionary says to copulate. In other, words, "do it every which way."

I remember hearing the term first on SNL, oh, decades ago, in a skit in which Dan Aykroyd was portrayed as "Fred Garvin, Male
Prostitute," who told his skeptical "client" that his instructions were to "Roger her roundly."

A-ha. Then my original statement, "I wish" stands.

Nice to see you're learning the lingo..;)

Posted by: Keanuette on March 26, 2004 04:39 PM
What's on your mind?.....
(new here? please read this before commenting)
Remember, this is a fan site.
Keanu Reeves is in no way connnected to this website.
Please do not make a comment thinking he will read it.
Comments are for discussion with other fans.
Thank you.