just goes to show me 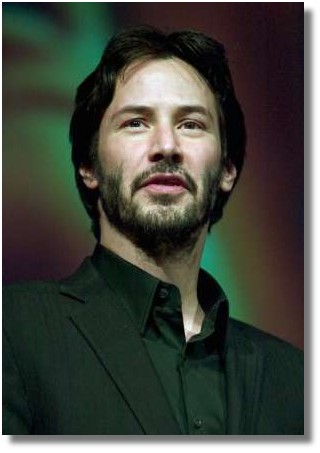 I had no idea ShoWest was this week but sure enough it is, and Keanu's in town.
He presented Something's Gotta Give director Nancy Meyers with "Director of the Year" last night at the Paris hotel.

Jena reports that there may be footage on tonight's entertainment television shows (ET, AH, etc.) so you may want to tune in for a glimpse.

-more pictures at Yahoo News and at Club-Keanu.

Well, we got a nice picture out of it...

...and here I was, thinking (courtesy of Mikey) you got your blue cardwallet back...
Too bad! Well, there's always April!

Do you feel him close by on your Keanu-radar?

I wonder if he's staying in town for a while? Perhaps he's checking out Green Valley Ranch before the gig in April.

I'm sad to not be in Vegas.

Actually my Keanu-dar totally failed. It's possible that the close proximity at Spaceland may have fried all the circuits.

Right here that Nancy Meyers is really ranking! Way to go!! I like her and I've never even met her...is that a good thing? What a gem Keanu for being there to recognize her.

That's pretty cool for both of them, and love the piccie!! Thanks Krix!! Did you ever get your blue card holder back? I hope so.. Cause I would be Roi-ally depressed if you didn't :(
Hugs and God bless your friend
Janice

Aw... Keanu is like a stealth plane... Dark and sleek, he goes undetected by radar, and you don't know he's coming untill he's actually there...
That's when he drops his bombs. Like that picture ;-)

I just want Chicks at C-K to know that these pictures have totally messed up my head today, and I have gotten absolutely nothing done.

*snicker* I didn't mean that kind of coming, Chianti :-) You perv! ;-D Bwahahaha!

What's this about the drummer...? What happened..?

OMG! He is ADORABLE on both ET and Access Hollywood, you "other time zoners" get your VCR's ready (I didn't tape)..hopefully there will be some sharp grabs from a dvd up later.

So playful, funny, smiling all the time and joking with both interviewers... *sigh* He looks like he's really enjoying a break from filming.

How handsome is he! Ka-THUD! (me hitting floor).

My computor caught the funk of pop-ups. It's in the shop... Using a loaner until I can get it to my fix it man. :D Had to re-ad all my favorite places! (yes, you Krix!). :D

Wam! *falls on the floor face first* Pretty *passes out from Ke's handsomness*

Well everyone else has said it, but I can still take my turn: Gorgeous. *sigh*

Sucks about the girl-drummer though. And the no-show.

Oh dear. I'm so disappointed that you used this pic. It's so unflattering. The angle is terrible, makes Keanu look old and drawn. I'm pretty shocked that so many people think this is a good pic. There are so many more of hm that are more flattering and show him as he really is--gorgeous. I gasped when I saw this pic. Sorry I don't mean to offend anyone.

Posted by: Veronica on March 27, 2004 06:34 AM
What's on your mind?.....
(new here? please read this before commenting)
Remember, this is a fan site.
Keanu Reeves is in no way connnected to this website.
Please do not make a comment thinking he will read it.
Comments are for discussion with other fans.
Thank you.