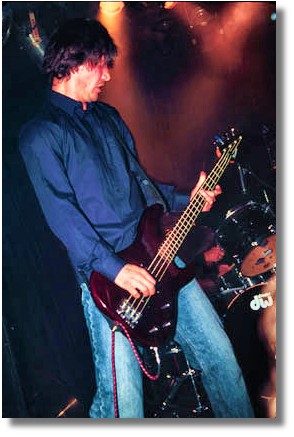 Don't forget that tomorrow night you can see becky (featuring our favorite bass player) at The Viper Room, a club so intimate that if you stand in the right spot there's a good chance of getting sweat flung into your ten dollar Vanilla Stoli n'Coke.

The show starts at 10 pm. Get there early, trust me.

I've done the math and there's no way I'm making this one......dammit.

Oh well, I have a lesson tomorrow night anyway and I didn't learn Paperback Writer this week for nothing.

I doubt if I am going to get lucky enough to meet the man... but I'll throw a bra for ya Krix! I'm getting there about 8ish just to be on the safe side ;)
Much luvz

krix--Paperback Writer! I love it...

Have you learned "Ticket to Ride"? I have to think that Paul put plenty of good bass riffs in classic Beatles stuff...

I've been thinking...........do you think if we contacted our respective therapists and really made them understand the importance of this trip and the bearing on our overall happiness.......okay, I'm reaching.
FUCK, I could use a little reeves this week.

Wish I could. Wish all the best to the lucky ones going. I'd love to hear I Adore You live...

Catz, I am so jealous! Give Ke a big SMOOOOCH for me, ok? Don't be shy, just tell him it's not your fault, sta-cie MADE you do it [although he might wonder if sta-cie is a voice in your head]! And then ask him how he feels about chocolate, OK? Thanks a bunch!

wish we could go back, and get a honkin' big piece of that chocolate cake again, while we're at it. and this time maybe Bret would be in the audience...

I wish I could go, Australia is a tiny bit to far to come from. All you lucky ladies who get to go, ask him if they might come to OZ. Ill gladly find him a bed... I would have to be in it of course,oh dear here I go again... Throw a thong &bra for me, & have a "rawkin" time.

I GIVE YOU MY DREAM IF YOU HAVE A DREAM TELL ME TO MY EMAIL :CHRISTELLE .EISENBEIS@LAPOSTE.NET. BYE

I GIVE YOU MY DREAM IF YOU HAVE A DREAM TELL ME TO MY EMAIL :CHRISTELLE .EISENBEIS@LAPOSTE.NET. BYE

Therapists...good idea Tess! If I were there I'd be throwin' a plane ticket!!!

Remember to tip your waitresses; they're working hard for you.

Thank you, and good night!

Please, I beg you, do not throw some nasty thong at the man I love. Throw flower petals. Throw precious jewels. Throw gold dust and glitter, shavings of swiss chocolate, a thread from the Pope's hem or the Shroud of Turin. Throw four-leafed clovers, tiny hearts cut from white silk and soaked in burgundy wine and tears, and holy water steeped in lavender... ah shit I wish I could be there.

It's the now infamous 'Keanuvision-thong', with Krix's logo printed on it!
She used to sell them in her shop before the "lawyer trademark 'thou shalt not use a celebrities name' people" came crushing down on her! I was 'forced' to buy one because she refused to accept money from me for something sweet she send me. :-)

If I recall correctly (and I have the memory of an elephant), she promised anyone who also owns this thong that:

Besides, thongs are cute, not nasty ;-p

Catz, you need 2 ask him if he has a problem dating younger women and how much younger. Remember everyone, age is nothing but a number!

You should make sure to mention all of his followers at keanuvision, too bad we can't all go, can't u imagine that. Dozens of keanu stalkers.

I'm there for the booze...er...I mean Inhibition Repossessor.

You know, I'd like to drink with Ke, get him to talk about string theory while sauced...maybe get a drunken Scrabble game going...Strip Scrabble or Strip Chess or Strip...

Well? I'm with you Smit...but I'd laugh if he put the thing on his head!...it's just you never know where its been argh!...I wonder if he keeps these things in a box, or passes them out as party favors, or gives them to girlfiends, or makes conversational pieces out of them, or maybe trophy mounts them,or links them all together for a bra and panty chain,or,or....makes you wonder doesn't it????

...or maybe Keanu, Paulie, and Rob have a fight over who they actually belong to! hehe

I prefer the term keanuvisionary.

I am excited about tonight!!! Just to be in the same room as that lovely man.... I wish everyone could go. Becky needs to play a Keanuvision member gig only sometime.

I am with u Dre. You should talk to him about that. How cool would that be if we had a private party. Just us cool folks allowed

By the way, Catz is going to the show tonight too so lets all send her and Dre some good Keanu-meetin' vibes while they're there representin', um.....yo.

I wanted to send Catz good vibes earlier, but her comments seemed to be closed! I send her an email instead & am focussing on her telepatically now :-)

She said that if she *would* get the chance to meet him, she'd ask him for an autograph dedicated to the entire KeanuBlogPosse! Isn't that cool? She rocks SO much :-)

*sending Keanu-meetin' vibes into the stratosphere*

Posted by: sta-cie on February 19, 2004 03:26 PM
What's on your mind?.....
(new here? please read this before commenting)
Remember, this is a fan site.
Keanu Reeves is in no way connnected to this website.
Please do not make a comment thinking he will read it.
Comments are for discussion with other fans.
Thank you.