he even makes a bad hair day look good 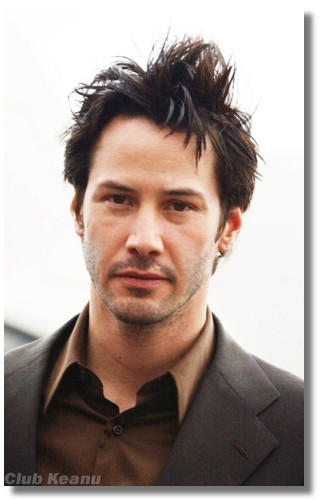 AWW i love the hair! it looks so GOOD! the opposite of BAD!I JUST LOVE HIS HAIR SOOOO MUCH! i loooove his healthy thick dark hair! its so shiny and pefect! I love it! im GUNNA PASS OUT FROM LOVING IT SOOO MUCH!!!!!!!!!! i just love the hair!

what i wouldnt give to run my fingers thru it, or have a lock of it to cherish!@!

Bwahahahahahaha! I see he still hasn't discovered the concept of 'using a comb', LOL! :-D

There is no such thing as bad hair day for him. I don't know what it means that I'm jealous of a man's hair, but I am. I've seen pictures of him when his hair is all over the place, but he looks great. I have to work to get my hair to look as good as his does when he doesn't even comb it.
Beautiful, beautiful hair. yumm.

Great picture, it makes me smile...sweet! Thanks, krix, for highlighting it.

Hey, forget about the hair - it's ALL in the FACE, baby.

Bad hair day for some, For Keanu it's always good. He has got to be the sexiest man alive,NO ONE compares. Sorry everyone feeling a little down today,but starting to feel better now i've seen this beautiful picture of our man. Thanks Krix you made my day.

see, I'm so bad, that all I can think of when I see his hair like this is what was he doing to get it this way, sigh, it feels intimate to see his touselled locks, he is not getoverable.

WOW! Do we need any proof this is the sexest man alive? I don't think so. Does anyone know if he actually comes to this site? Or any for that matter? well gtg and admire my man.

mmmmmmm. yes he does.

Sometimes it is hard for me to look as high as his hair. His eyes just melt me, and I just stop and stare at them. ::sigh::

that's the first time i've seen him look anything near 39. i think it suits him exceptionally well. also love the hair. short is good. definitely.

oh, i love his hair... it's great like that!! Makes me dream about him waking up... The hair is fantastic! Really is.
Thanks for the pic, Krix.

We loves him just the way he is...deep sigh

Keanu the Punk. You know how long it takes to get that bed-head look? He's such a poseur! :o)

He is simply the most beautiful man of the world. . . . I am from Brazil and I had to translate that for you, he is really beautiful. .

Posted by: Ellen Reeves on March 4, 2004 04:17 AM
What's on your mind?.....
(new here? please read this before commenting)
Remember, this is a fan site.
Keanu Reeves is in no way connnected to this website.
Please do not make a comment thinking he will read it.
Comments are for discussion with other fans.
Thank you.