It's all about the bass, now.
I've got to get my Reeves on today. I've got the Australian wine and the coffee cup. I just need the groove.
Vibemechants are scheduled to record today and I still suck, in fact I seem to be getting WORSE if that's possible. It's because they took away my pick, I just know it. If you'll notice the new pics on the sidebar, you'll see Reeves playing with his fingers. They're there for a reason. Inspire me, thumper.

I think this spring is going to be all about the bass for Keanu as well. As far as I know, he's not due to start filming anything new for a bit so hopefully there will be some more becky dates in the next couple months, *cough*cometoVegas*cough*. And I plan on making a few of them, just to watch him play and check out his gear. I never bothered to really look closely before. In the past, I watched his hands move but I just followed their motion without really registering where they were landing. Of course, his face. It's really hard NOT to focus on the expressions he makes. 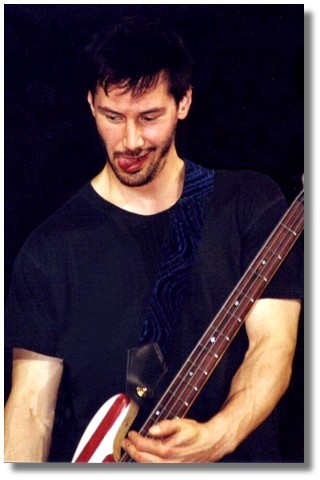 This picture is from one of Dogstar's summer shows in 2001, probably Summerfest. Below is a live track from that show.

Dogstar- Blown Away, live at Summerfest 2001

Now, I've got to get MY bass in gear and go rock out.

Hey Krix, Thank you for the dogstar track. I didn't have this one.
Nice pic! You're right, pretty hard not to pay attention! You have a great day too and good luck with your bass.

Thank You fo rthe MP3. It's always nice to find something new in the Keanu Community. I can't wait to hear your music. Take care & GOD bless.

Cool, a live version. Have fun at practice. If you don't have fun and love it, then it's not worth doing.
I love the faces he makes too. :)

Heya thanks for the lovely pic, and I can't wait to hear your music. Hopefully I won't have trouble downloading like I did last time with your bass debut.. here I go Keanu Reevin' again as my fiancee says, when I go visit my friends' blogs and spend all day answering e-mails and going to my friends sites too LOL! :).. hugs and God bless your friend

Hi everyone,thank's for the song,one of my fav's.Happy Ending is the only Dogstar cd Icould get down here in Oz.I feel VERY enviouse of anyone who got to see them live,&anyone who sees Becky live.Irealy hope you dont mind me talking to you like this. For years now I have loved Keanu,my husband is fine with it & my little girl thinks he is great. Reading your site has been great as I no longer feel alone.Im only learning to use the internet,so far so good.Good Luck today Krix, I'll say a prayer for you.God bless all. your friend in Keanu.....

It's going to take me some time to get through the history. Lovin' Dogstar...thanks Krix!

Thanks, krix!! more Dogstar live, I love it!

Have fun with your bassin'! I'm looking forward to some Vibemerchants downloads soon!

Hey! I just wanted to say i am new here and i love this site krix. Hey does anyone know when Becky is going to be touring? It is nice to know other people share my obsession like passion for keanu.

If becky is booking dates, they NEED to tour a little so we can all see them live *cough*cometoCanada*cough*.

It's all about tongue-hand coordination...

Oh, and that works for playing bass too!

Rockin to Dogstar first thing in the morning, love it. Thanks krix, this is great!! One of my fave Dog songs!

WE ARE THE FOUNDER OF A GHERKIN BOTTLE!YOU AND ME! FOR EVERYBODY LIKE GHERKIN,SAID YES! WE LOVE GHERKIN.OPEN YOUR HEART FOR US .TELL ME WHICH WHAT DO YOU PREFER TO EAT WITH GHERKIN?

Sandra, where can we get this song? krix could add it to her k-mix.
(Où peut-on trouver cette chanson? krix pourrait l'ajouter à sa collection k-mix.)

sta-cie! You're canadian too? Wow, there's a whole pack of us. *giggle* Where from?

Actually you can download a sample on her official site: www.maritbergman.net
I'm sorry I don't have it complete but I'll see what I can do...
At least I can give you the lyrics:

Someday soon
I'll think his childish laughter's
Silly
Soon
I'll resent the way he talks 'bout
Booze, drugs and cartoons
I will think he's shallow
Someday soon
I'll rant about his lack of taste
And soon
He can look for my love somewhere
far beyond the moon
and I will have forgotten his embrace
But for now, all that I
Can think of is his keanu eyes
Oh I'm not ready I keep slipping
All the time
I'm longing for the day when he
won't occupy my mind
I guess I'll just have to wait
Another while

Someday soon
I won't remember rainy
Afternoons
Warm soft skin and kissing
under blankets
I assume
That any day now, he will be
replaced

But it's hard oh so hard
Lonely Sundays, crisps and
Coke and chocolate bars and
VCR
I wish I could stop wondering
Where he went
And what he's doing now and
And what we were and what it
meant
Right now I just wish that he
was still around

Enjoy!
Lots of kisses from Paris cause even french girls are keanaddicted!

It's all about tongue-hand coordination...
Mikey2, I'm ROFLMAO!

Zen, I live in Alberta, close to Edmonton, eh? [had to throw that in] How about you?

Sandra, this song sounds like Missy Marit had a [very] close encounter of the Keanu kind! Is this true?

I'm in New Brunswick sta-cie. Planning a trip to Alberta this summer actually. My little brother lives in Calgary, eh?

Now becky MUST come to Alberta this summer! Somewhere in between ... like Red Deer [yeah right]. :D

*smooooch*
-I'm sorry Krix, I'm still in Valentine-mode :-)
Did you manage to record the song? And will it be released? Because I have to prepare my 'groupie-outfit' *with* "vibe-merchants rawk" t-shirt then ;-)

Oh, & OMG, the Canadians are taking over, LOL! Drat, I *must* start studying French like I want to soon now, otherwise I'll never be able to read what you are all going on about! ;-)

I thought maybe you'd like to know that that song Keanu Eyes is to be found over at Kazaa!

Julie! all you need to do to talk Canadian is to add an "eh" after every sentence! :D I'd actually like to learn French too! I took a couple French classes in school, but I don't really know much. I CAN remember an entire filmstrip from Grade 5 [can't write it though]. Something about Mother being in the kitchen ... pouring milk into bowls ... Paul's bowl is light blue ... yadda yadda yadda. That Paul was a little prankster, he put salt into Alice's bowl of cereal!

Well I'm not Canadian but my mother is. Does that count?..hehehehe...she was born in Quebec. They moved to the States when she was 10 but she still speaks fluent French. Never did teach the language to her kid's though :(. Anyway's just had to share in all the Canadian love going on in her.

Toriane, that SO counts! How you doin', eh?

My sister in law is Canadian. Does that count?

Practice last night went well, we worked on 2 tracks but didn't finish either of them. I was only tempted to resort to my pick once.

I get to leave the office early today because of the holiday, so I'm off to practice some more, eh?

By the way, I don't have any Canadian in me, but if Keanu or Kiefer want to change that....
*wink*

Zen! You never told me that all I needed to do was add an 'eh'?
So I've been practisement to make mon French language prononciontement plus belle pour ne pas nothing eh? ;-D

Gidday Mate's, Im from OZ. The only way I can get any Canadian in me is..... and the only canadian I want is KEANU!!! So I'll have to add eh to the end of every letter,eh!!

Im from Minnesota- Is that close enough??
We just add You Betcha to the end of everything!!
So feeling Minnesota-wishing I had a little(big!) Canadian in me!!You Betcha!!

Zen. Moi? Well I'm doing pretty good, eh! But man I'd been doin even better if like Krix I had some Canadian in me, eh. :) I think then I could claim to be a Canadian, eh? My life will have all come full circle then. Being in a Canadian then having a Canadian in me.

krix, you SO make me laugh out loud! smooches, chick, and keep on rockin'...

You guys are hilarious!

Julie!, I didn't tell you about the eh? because it's not that prevalent in French Canada and I kind of didn't think about it. Sorry!
But speaking English with a French-Canadian accent will also do. It has to be a French-Canadian accent though, not a French accent, which will just make you sound sophisticated-European. It's all about putting the accent on the last syllable of every word and pronouncing "th" like "d".

For how to, see Keanu in Youngblood
For how NOT to, see Roseanna Arquette in The Whole Nine Yards

Oh, dank you!!!
-And also for giving everyone an excuse to intensively 'study' Youngblood again now ;-)

Wee-hee, I'll practice from now on! :-)
HoweVER, I dink I'd like to sound like a sophisdicaTED EuropeAN as well, dough, so I'll keep on tryelleMENT dat too, eh?
;-D

Posted by: Julie! on February 17, 2004 10:09 AM
What's on your mind?.....
(new here? please read this before commenting)
Remember, this is a fan site.
Keanu Reeves is in no way connnected to this website.
Please do not make a comment thinking he will read it.
Comments are for discussion with other fans.
Thank you.